0 Kate MacEachern, NASH Project, PTSD, The Long Way Home 2015 10:57 AM
A+ A-
Print Email
The day before the event at Government House in Regina Saskatchewan, the three teams involved in this, the final walk for Kate called "The Long Way Home 2015" converged at the home of David & Danielle Reed.

David Reed is an Aide de Camp to the Lieutenant Governor General and was in charge of the honour guard at Government House.

The 3 teams involved in the Long Way Home 2015 are The Wounded Warriors Weekend Foundation team, The N.A.S.H. Project and of course Kate MacEachern's team.


As a benefactor of Kate's walk, Wounded Warriors Weekend Foundation has helped the cause by getting sponsors for a truck and tailer, helping to set up some of the events along the route and taking care of a lot of other small details.


The N.A.S.H. Project, which is also one of the benefactors of Kate's walk, is joining Kate for the entire trip from Nipawin SK to Chilliwack BC.


Rebecca Santanna, the founder of The N.A.S.H. Project and her daughter Emily will be riding horses in the ditch beside Kate.


Their driver and support person Lisa Peterson will be ensuring the horse team will have everything they need while on this journey. There are 4 horses that will be being sharing the trail duties.

Kate MacEachern's team includes Paula DeLorey, Kate's medic, Sophie Pyne, Kate's photographer, JoAnne Power-Gilliland, known as Gunny, Kate's Driver and Kate's son Tyler, who is joining his mother for the first 30 days of her journey.  Also in Kate's entourage, her father Hugh and her aunt, Linda and myself (I am Kate's Ops Manager).

The woman who is responsible for ensuring the media knows about all three teams and their roles is Cindy Murphy, who is a fabulous publicist.

The BBQ hosted by David and Danielle was not only a fantastic time but a wonderful  opportunity for everyone from the three teams to meet face to face,

Kate was emotional and understandably so.

After the fantastic meal that Reed's hosted, the teams headed to the Ramada Inn Regina to get rested and ready for the big day at Government House.

Before we could head to Government House the next morning, Ken Madraga of Melody Ford in Melfort Saskatchewan presented Kate and her team with an F250 Crew Cab to use as the tow rig for her journey.  It was a moment that I am sure no one, especially Kate will forget. 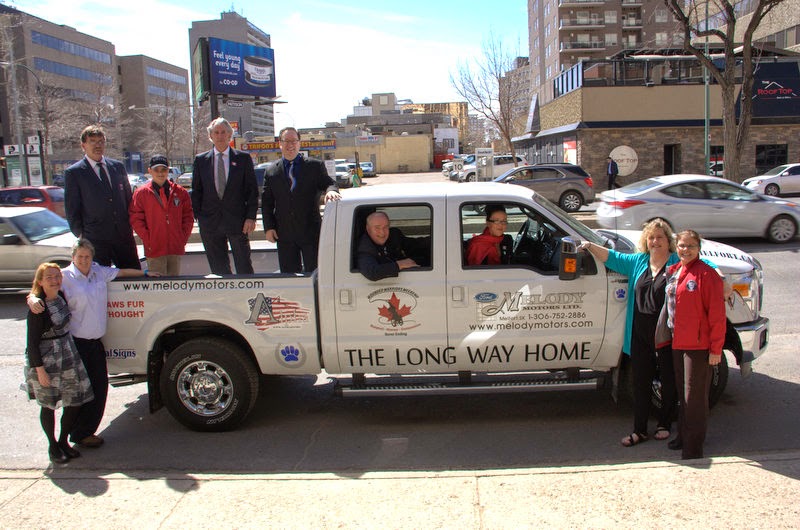 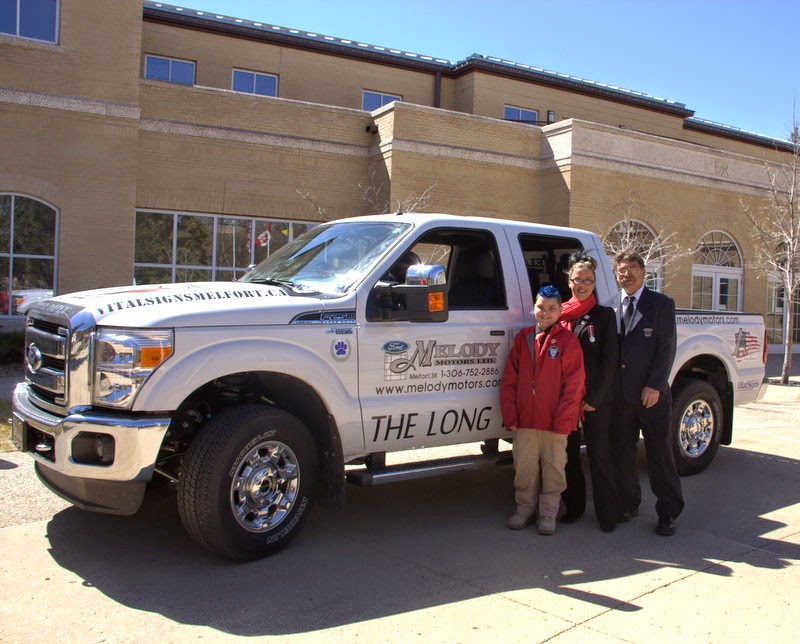 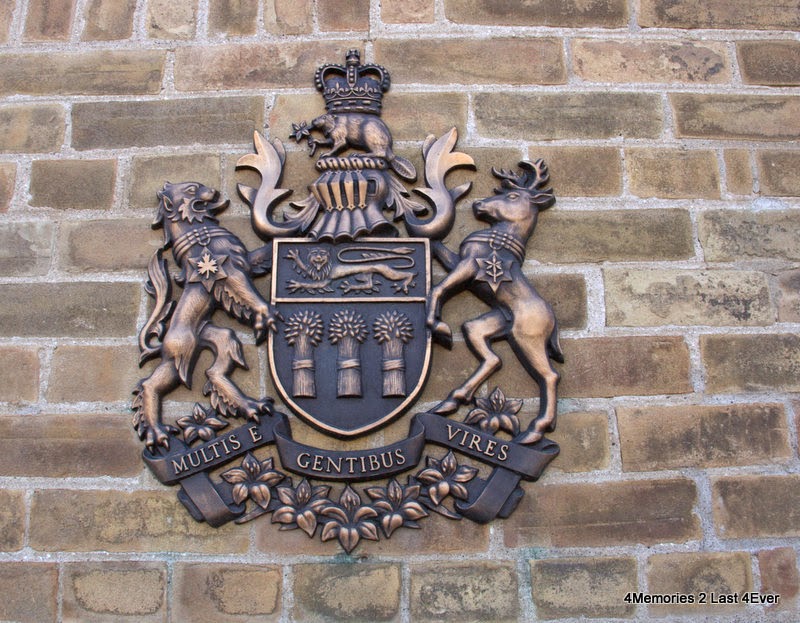 The weather was picture perfect on April 29th and Government House was filled with excitement, pomp and pageantry.

The horses of the N.A.S.H. Project had their own pen right out front of Government House and the media scrum that would be held after the reception was held beside their pen.

After a wonderful luncheon, the ceremony began, with Her Honour coming through not one, but two honour guards. 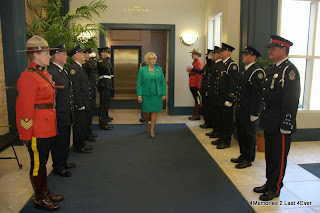 Vaughn Solomon Schofield and her right hand gal Heather had invited 9 chiefs to attend the ceremony/reception for Kate and the teams and out of 9, 8 of them came! The ninth chief wanted to attend but she was out of country at a conference.

The Army, Navy, Air Force, RCMP, Municipal Police and EMS chiefs for the province of Saskatchewan were all there.

After hearing the moving speech from Her 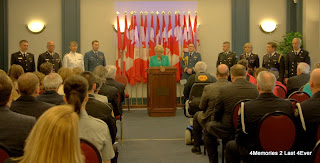 Honour, the cutest little gal named Destiny presented the Lieutenant Governor General with the puppy that the N.A.S.H. Project donated to the province of Saskatchewan to be trained as a service dog.  Her Honour dubbed him "Ruff Rider". The puppy, a Mastiff- Great Dane cross was oblivious to all of the happiness and joy he brought to the day. 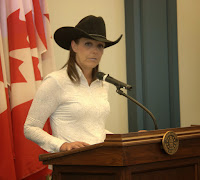 We got to hear from Rebecca of the N.A.S.H. Project and why therapy horses and service dogs are so successful in helping those with PTSD.


Next up was Blake Emmons of the Wounded Warriors Weekend Foundation.

He spoke of the power of camaraderie, common experience and the healing that provides those with PTSD. 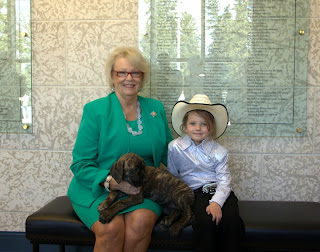 Then came Corporal Kate MacEachern Ret'd who delivered a moving and passionate speech on PTSD and what the walk means to her, her fellow sufferers/survivors and her team. 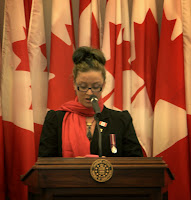 As we all watched this amazing young woman speak, the sense of anticipation, the challenge, the heartache and the triumph that lays ahead was palpable.

"Untied We Stand, Divided We Don't Stand a Chance" is the line she closed with.

It was a fitting train of thought to end the reception on. 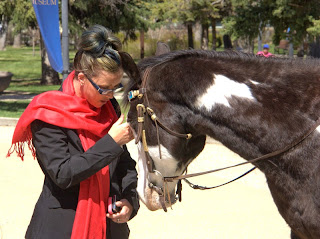 The media scrum that followed lasted about an hour and a half with media from all over Saskatchewan interviewing the two road team members. Dixon Christie, producer and videographer of "Battle Scars" who is filming for a documentary on Kate's walk was on hand interviewing the various team members as well.

As Kate's Ops Manager, it was hard to say goodbye to everyone on the teams, but they had a good four hour drive ahead of them to get to Nipawin, the home of the Wounded Warriors Weekend and Kate's step off location.

As I got on a plane to head back to Grande Prairie, the two road teams were busy packing their gear into a toy hauler provided by Chegus RV in Watson SK.

I am told that the pancake breakfast hosted by the Town of Nipawin and their Legion was huge success and we know that Kate, Rebecca and Emily made it to their first overnight stop in Love SK.

It takes a lot of people to organize an event of this magnitude and every person who has been involved has stepped up in stellar fashion.

As Kate walks from Nipawin SK to Chilliwack BC, Rebecca and Emily of the N.A.S.H. Project will be ditch riding along with her and the walk and ride will culminate at this year's location for the Wounded Warriors Weekend - Chilliwack BC.

The ladies of these two teams have a long and arduous journey ahead of them, they will walk and ride through all of Mother Nature's changing moods and hopefully you will come out to meet them, support them and donate to the cause.

You can follow their journey and donate to the cause by visiting www.thelongwayhome.ca
If you want to join Kate along the way, you will have to sign a waiver which can be downloaded on the website.

For media inquiries you can contact Cindy Murphy at: dcmurphey@sasktel.net

All photos by Sophie Pyne - Official Photographer for The Long Way Home.

If you are blessed to be riding today, please ride like everyone around you is blind and cannot see you.