"Further Than Yesterday, That's All That Counts" - A Book Review

I have had the honour of knowing Medric and his wife Jocelyn Cousineau for a number of years.
My first time meeting this man was at the Wharf Rat Rally in Digby Nova Scotia.
He was performing magic tricks. Everyone called him "Sea Dawg the Magic Man".

On the outside, this very large and jovial man came across as a class clown kind of guy. But his eyes held a look of something hidden, blocked off, almost dead unless he was speaking from a place of anger, the laughter he made everyone else experience never seemed to reach his eyes.

Like Robin Williams, Cous brought joy and laughter to others lives, but privately he was dying an emotional death.

Cous's book, "Further Than Yesterday, That's All That Counts" is a real, raw and detailed look at military service. It chronicles his time in the Canadian Forces and the harrowing sea rescue that he and his comrades under took. The one that sent him into the abyss.

I found it very difficult to read Cous's book. I'd pick it up, read a bit and then have to put it down again, but it kept drawing me back.

His descriptions of the horrifying painfulness of PTSD, are so bang on, so poignant and that's why this read captivated me and repelled me all at the same time.

His style of describing the demon called PTSD, draws you in, makes you feel the darkness, the hurt, the anguish. He makes you feel and understand the devastation that PTSD wreaked on his family.

But it does far more than that.

It gives one hope. 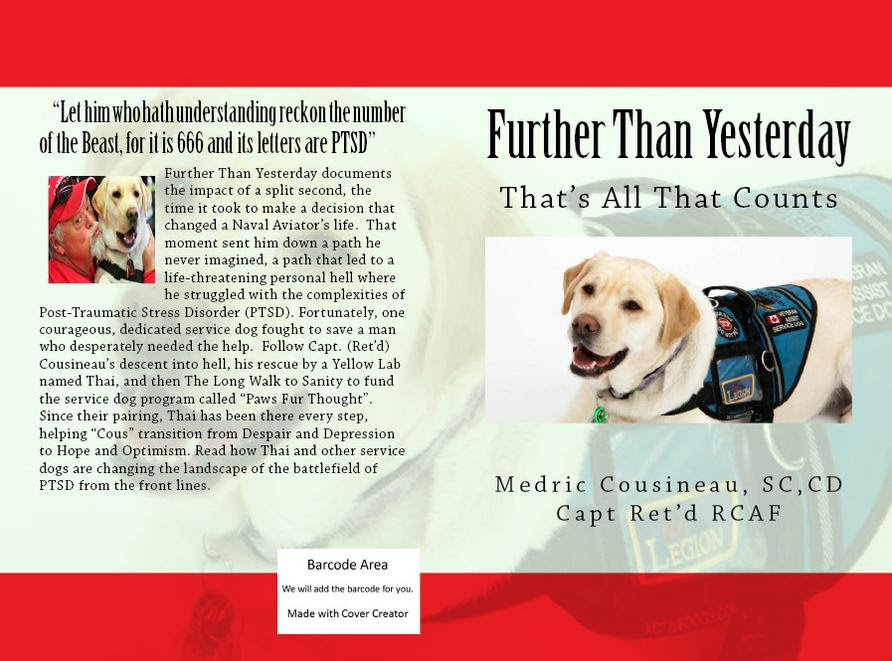 Cous's service dog "Thai" has shown not only Medric and his family, but an entire nation the healing power of unconditional love.

Of all of the things a service dog does to enriched the life of its handler and their family, that unconditional love is probably the most profound.  This dog turned the lights on in Medric's head and heart and gave him a sense of purpose in his life, a renewed mission if you will.

That mission? To get others to understand and appreciate the life rejuvenating gift of service dogs.

This book is a must read for anyone whose life is touched by military service.

Get the book here: www.furtherthanyesterday.com