The Airdrie Bikes & Bulls, Rumble on the Runway 2018

0 Airdrie Bikes & Bulls, Airdrie Oilmen's Association, Bull Riders Canada, Didsbury Car Club, Emery Erickson, HSE Integrated, RAZOR, TARA Energy, TOS 8:27 AM
A+ A-
Print Email
The last weekend of July I headed for Airdrie and the Airdrie Bikes & Bulls, Rumble on the Runway put on by the Alberta Oilmen's Association. This was to be my second time attending this event, last year's was held at the rodeo grounds, this year was to be held at the Airdrie Air Park.

The AOA had decided that the old rodeo grounds, while an accommodating venue to work with, just wasn't the location to help the event really take off the way it should and so they negotiated a deal with the Airdrie Airpark.

What a great move!

While they had lots of little hiccups, the venue itself, being such an open canvas is amazing and will give this event the chance it needs to truly flourish.

Adrian Pruden, the event coordinator realized very quickly that they had made the beer gardens too big with no people mover, and yes, it made it tough on people. However, based on the numbers of people who did attend, the beer gardens is the right size, it just truly requires a people mover!
And more seating and garbage cans will be needed next year, but truly, for the first time at this venue, well done! Very well done.

They got around some of the challenges by having waitresses serving at the rodeo event, it made a lot of people happy that they did not have to loose their seats in order to have an adult beverage.
The food vendors were camped out in the middle area of the event so no one had too far to walk.  The Perogy truck was one of the favourites along with the Porky's Catering truck. There were vendors selling jewelry, clothing, makeup and all sorts of gadgets too!

They had a party bus shuttle service that took people to and from various hotels and other locations in Airdrie, to ensure no one had to drink and drive. I used the service extensively and was so grateful for it. I left my motorcycle in town at a friends house.

They had fantastic security folks on the gates, but there were one or two folk that needed to be told not to be so aggressive in the way they handled things. The senior management of the security team were incredible folks to work with.

The campsite was enormous, there were light towers with power hook ups everywhere, lots of port o potties, the biggest single challenge - no people movers but this is being remedied for 2019!

On Friday when I arrived I volunteered along with my friend Marnie Thibodeau to hang banners for sponsors, I am not sure either of us knew what we signed up for but four hours later we were done!

When the show opened Friday evening, the cowboys and cowgirls took centre stage and my lord they put on a show.  I love the silky voice of rodeo announcer Emery Erickson, the man has been working at his trade for decades and he's damned good at.

The bucking stock came from a wide variety of stock contractors and they brought out some amazingly rank horses and bulls.

In all there were 28 failed bull ride attempts. Three successful rides by some of pro rodeos TOP cowboys in the Bull Riders of Canada Association.

But it was the kids that stole the show.
Between the wild mini horses and mutton busting, the kids won the hearts of so many.

I love watching family sports and when you think about it, rodeo, drag racing and motorcycling are all very much family sports. I guess that's why this trifecta seems to work so well. 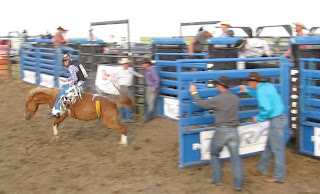 All weekend there were amazing bands too, but I was so wiped out from walking that venue, doing photography, video and interviews that I never got to enjoy them.  I hear the IKONS, the Kiss Tribute band was utterly amazing.

The big day - Saturday was jam packed with events like the Show 'n' Shine:


There were motorcycle rodeo games like the engine toss: 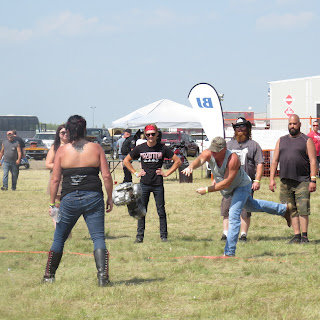 There was some serious drag racing going on with the Didsbury Car Club hosting!
Get a load of these twins in their matching race cars: 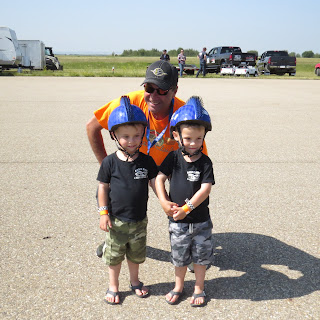 Folks, although this event is 9 years old, when you move to a new venue, it's like being a brand new event,  ALMOST.

This year was a proving ground and while yes there were challenges, they proved to themselves that they, the Airdrie Oilmen's Association can do an amazing job no matter where they host their event because of the most incredible sponsors they have.

The sponsors that support the Airdrie Bikes & Bulls Event are STELLAR! 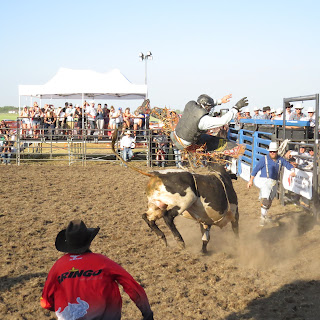 I know the causes are what truly motivate a lot of these sponsors along with the Airdrie Oilmen's Association to do what they do and to give back into their communities of the Airdrie region (Over $250K).  Airdrie Community Links, Airdrie Victims Assistance, and the Airdrie Food Bank are the focal charities.

I know I plan on attending the 2019 edition - I had a blast this year, but I also know of many of the changes coming for next year and folks, you'll want to be there too, I am sure of it!