0 Community, Law & Politics 5:34 AM
A+ A-
Print Email
The news from the Ottawa Citizen is that former bob sledder and Olympic participant, Kenneth Peter Laurier LeBlanc, 45, of Calgary, is charged with extortion.  The Hells Angels member has had other brushes with the law  - Begin Quote: He spent behind bars in the early 1990s for threatening witnesses who were to testify at his brother’s murder trial. Most recently, he was handed a two-year sentence and a lifetime firearm prohibition for aggravated assault in connection with a May 2007 incident. End Quote

In Australia, there is talk of recreational bikers registering with the police to prevent harassment under the new Anti Bikie Laws.

According to several articles on the matter, there were a dozen bikers including Eva Cripps from the Australian Motorcycle Council at a meeting with the Police Minister, Jack Dempsey and several senior police officers.

The police think the easiest way around them harassing non bikies is for non bikies to register their riding events with police.

So this is their solution, make recreational/independent riders register their events with the police instead of the police educating themselves on the non 1% patches and clubs/organizations.

According to the article in the Telegraph, police say they will continue to pull over recreational riders: Begin Quote- POLICE have defended their treatment of legitimate motorcycle riders, saying it's hard to tell someone's identity when they're wearing a full-faced helmet. End Quote

I'm not sure about you, but it seems to me that the police here in Canada have the same attitude in various pockets of this country too, although they are not as vocal about it as their Australian counterparts.  British Columbia appears to be one of those provinces that has a mentality that everyone who rides a motorcycle is a potential suspect for being a member of a 1% club.

It drives me nuts.  The recreational rider as they call us (those who don't ride with a 1% club) has no rights in the war against motorcycle clubs that the police deem as gangs.

The justice system world wide in fact seems to have this attitude. I read hundreds of articles on this topic and I find that every article where in the police are interviewed has the same type of bent to it.

Everyone who rides is looked at with suspicion by the police.

This WAR against the bikies in Australia is getting ridiculous and fast. The new laws are only 2 weeks old and already they are having to revise them. Why? Because some politician and his cronies decided they were going to make a name for themselves as being the one who brought the bikies down.  The problem is that those laws are not well written, they are draconian in their bent and they are being enforced by people in many cases who are over zealous.

So, what are your thoughts on how the police and the everyday ordinary rider can get around this situation?

The police want to have events and group rides register before they head out.

And so what - you are going out with 3-4 people and you have to tell the police who you are and where you are going to avoid being caught up in the witch hunt?

What about the individual rider?
Do you have to call into your local and tell them you are going for a ride?

Perhaps everyone who wants to go for a ride should all call into the police stations - I wonder how badly tied up the phone lines would be and would emergency situations suffer for that?

Where in God's name any of this make sense?

People who ride motorcycles in Australia should be very fearful, because obviously in Australia human rights mean nothing.

Australia is a police state now. No one can deny that.

I ask you - do you have an idea or solution to the challenges in Australia?

We'd better start thinking of some answers folks because this could become the reality where you and I live - doesn't matter the country...

So - what are your ideas on stopping the insanity in Australia?

There are many other stories in the news feeds today. Visit www.beltdrivebetty.com to find out what's happening that could affect your day or life as a motorcyclist.

I leave you with a few funnies to contemplate, shared with me by friends on Facebook and via email: 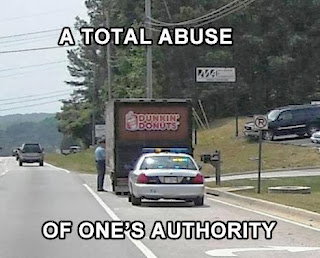 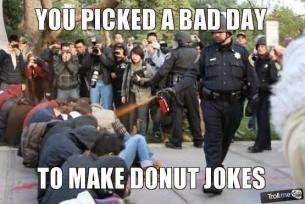 Have a great Thursday everyone. If you are a subscriber to our newspaper, the Busted Knuckle Chronicles - I hope you are enjoying your read and taking my message about dressing for the slide seriously....

Ride like everyone around you is blind and can not see you and remember to dress for the slide and not the ride.