The Motorcycle community - being fleeced by other riders?

2 Law & Politics, Motorcycle Community 9:28 AM
A+ A-
Print Email
Is the biker community being fleeced by other riders?

Read about these two groups and then decide for yourself...

Bikers Against Drunk Drivers in the US has been under investigation regarding how it spends the money people donate.

Cyril Huze did a piece on this rather dubious appearing group - How does BADD Spend your Money? An On Going Investigation

There is no crime in being paid an industry/regional standard amount to do a job for a non profit.
Not many can devote 40 hours a week for free to a charity or non profit. People need to eat.

But when you read this article, you will see that there are a number of things that have transpired that make the people investigating BADD have some very legitimate questions to ask:

"While state filings do indicate that outreach is part of their mission, so is helping victims, which is where experts say BADD is falling short. Perkins would not reveal how much money he’s making from BADD. On state returns, he lists his address as a UPS mailbox in Ormond Beach, Florida but it turns out he actually lives a little farther south. Towering above the Miami Beach skyline, in the shadow of South Beach is the Portofino Tower. Records show Perkins lives in this “ultra luxury” high rise with a woman named Wahida Benferhat, who coincidentally is listed as the charity’s director. Records show Benferhat bought the condo worth about $950,000 in March. According to the property appraiser, there is no mortgage, which suggests the nearly $1 million condo was paid for in cash.
Records show Perkins also owns a 27-foot pleasure boat similar to one that, according to the state, is registered under the charity’s name. Despite traveling to Miami to speak with Perkins, he declined WESH 2′s interview requests… I am not sure that the BADD’s Sponsors are aware of BADD’s official record regarding the very poor amount provided to those who are hurt by drunken drivers."

Here in Canada we are not immune to those who appear to be rather dubious either.

Ray Sasseville and his crew are attempting a comeback event at the old Merritt Music Mountain Fest Site - dubbed as Sturgis Canada 2014 the "New" event is filled with American entertainers and Celebs from the American Motorcycle Community.

Under the header of Sturgis South Dakota Friends and Attendees on the home page they list:
Jasmine Cain - Headliner act
Kimmy Cruz - HOST of the 1st Sturgis Canada
Jack Schit - EMCEE
Their security head is even from the US - Keith DeNinno.

They are apparently counting on people who want to meet the "Stars" of the real Sturgis OR perhaps they have had to go that far a field to find people willing to work with them.

To my way of thinking, I believe they are hoping that the American Biker Celebs will give the event some credibility. In fact, they appear to use the name Sturgis SD as often as they can in their write ups about their American Celebs.

Kimmy Cruz is coming back for a third time, this time as the HOST - a message I am sure the promoters want people to absorb.

From the "Sturgis South DakotaFriends and Attendees information on the home page:
"I have been fortunate to be part of the first two festivals and feel honored to be asked to host the historic, first ever Sturgis Canada. See you all there.

I guess a paid endorsement like that is supposed to make the facts look less unfavourable?

The organizers appear to KNOW they have a credibility issue, I am sure of it, because if you look on their web site - they even have a link called PROOF...and on that page, they offer up a page 2 where they have Babes & Bikes but guess what - at least 5 of those pictures are from the Internet and not their event.

They are using a blend of photos from the Hay days of the Merritt Music Mountain Fest and from the failed Sturgis 2011 and 2012 events to prove they are legit and attempt to give themselves the appearance of people who know how to do a good job.

Under the Charity link - they are using old 2011 and 2012 letters from ministers of the government, to lend credibility to who they are (If the secretary who typed this was mine, I'd fire her.) 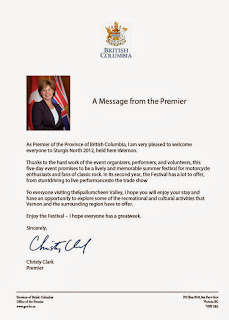 When the entertainers who are paid to perform and the celebrities who are paid to endorse this event go home, I wonder, will the 2014 event leave as much financial destruction as it has in the past?
I wonder if people will leave feeling like their pockets were raped and hoovered clean?

Yes, Canada needs a great national motorcycle event. It would be a wonderful thing - however, in my personal humble opinion, anything run by Ray Sasseville and his team is suspect based on their track record.

The fact that they feel the need to associate themselves with the most prolific and prestigious of all biker events in Sturgis SD by hiring so many of the people who are connected to the Sturgis Motorcycle Rally in SD makes me ask the question...is there not an original bone in their collective bodies?

For those of you who don't know and those who need a reminder - here is a link to a blog post I did on who the man behind this event is: Sturgis North 2013 Will you support it?
In the above linked article, I chronicle the information about this man and his financial dealings from public records, pulling it all together in one spot so you can educate yourself.

For those in my circle who have attended Sturgis North in the past, I urge you to share the information here with anyone you find out might be supporting or attending this event - help them make an informed choice about who they are dealing with.

If you choose to support this event, remember their track record and if things don't turn out well - at least you won't be able to say that you weren't warned.

Have a great Sunday