0 #Darby Mills, #DMP, #Joe Schmucks Roadhouse, #Serges HD Repair, #Shuswap, #Sicamous, #Steve Hammer, #Summer Stomp 10:45 PM
A+ A-
Print Email
The Shuswap is but one of British Columbia's meccas for riders in the summer time.
The mountains, rivers, lakes, curves and events, these are but a few of the major draws that BC has to offer the rider and every other human being that loves mountains, lakes, rivers, curves and events!

Getting to the Sicamous Summer Stomp or any of the events in BC means navigating beautiful roads that are busy.  Lots of construction means lots of impatient people who like to take a lot of risks just to get somewhere, two car lengths ahead of you.  It seems to me that somehow the beauty of the region gets totally overlooked while people are driving in a hurry to get to their destination.

Doc had developed a major transmission leak, and I ended up staying in Airdrie over night. Thanks to a good friend and member of the Rider Support Network, Art Van Dieppen who came and helped me temporarily repair Doc, I was able to nurse him into Sicamous without any apparent damage to the transmission. Doc shifts nice and crisp! 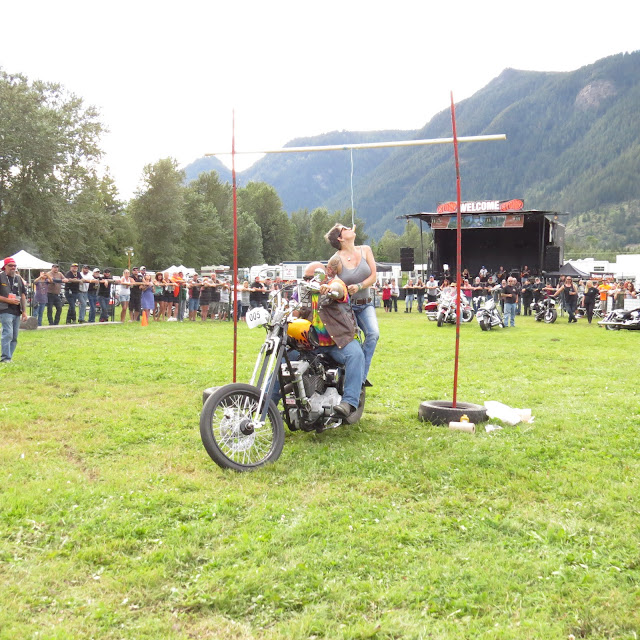 My good friend Alisa Carstairs gave me a couch to sleep on and I was able to get into Sicamous by 3 pm on Friday.  There was one point however, where I thought I might end up being late arriving. At the Donald Ho bridge, there is construction and it is also an area where mountain ranges meet causing the winds to be very erratic.

A micro storm swept in with gusting winds that were strong enough to rip a "This road maintained by" sign right off it's posts, and the one post went sailing through the air looking like a double headed axe, right in front of me.  I had pulled over on the shoulder, the wind was just howling and I called Sicamous to find out what the weather was like there and was told that other than cloudy, it was quite nice.  I waited on the side fo the road for about 15 minutes and finally the winds settled down and I could get over 30 mph in third gear!

I used to live in Sicamous and it felt good to arrive back in the city, I forgot how much I had loved this place. It was sad to see that there are a number of businesses that have not survived and some of the changes like the addition of a round about that made me reminisce about long lights!!! HAHAHA, NOT.

I was staying at Joe Schmucks Roadhouse, my favourite motel. (Here is my little video saying goodbye to the Shuswap and thanking a few of the folks who helped make the stay so incredible.)

Their wonderful hardworking staff in the restaurant serve up the great food the kitchen puts out and George and Lori manage the campsite, the motel and the housekeeping staff and laundry.

It's a big job, but it allows them both to be home with their daughter and they love working for the Pearsons.  Mark and Wendy formerly of Drayton Valley Alberta, are some of the finest people you will ever meet.  Anyway, as you can tell, I love this place and it felt good to be back.

I called Steve Hammer, one of the organizers of the Summer Stomp and he picked me up and gave me a lift to the grounds and also organized for Serge from Serge's HD Repair to repair my motorcycle's sick transmission. (If you ever need a good, dependable technician, Serge is your guy!)

The Summer Stomp has seen 28 different iterations before this one and each one has been unique.
They have evolved over time. There used to be mechanical bull riding, and a wet tee shirt contest, those were not present and had been removed the last few years. 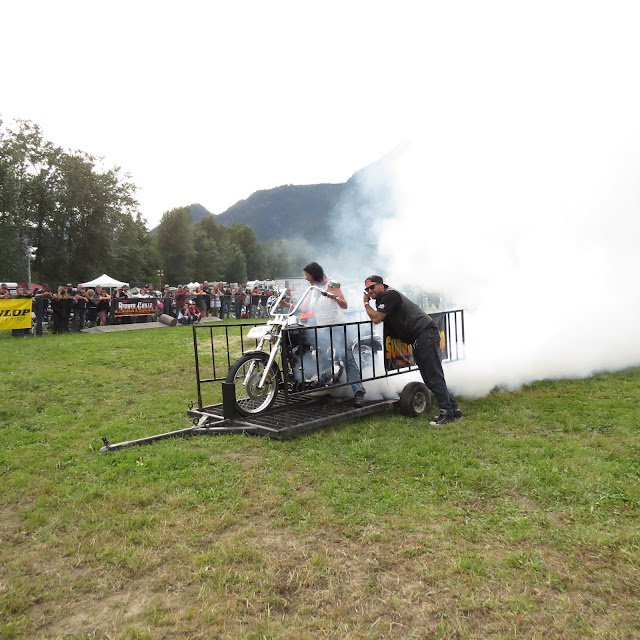 The shuttle bus that runs on donations and goes from hotel to hotel has done an awful lot to reduce the presence of the police. The police officers that did show up proved to be pretty decent.

Bathrooms, showers, food vendors, a merch  booth, covered eating area and alcohol sales all in close proximity to each other made the job of the gents running the people movers through the campgrounds to the grounds an easy task. 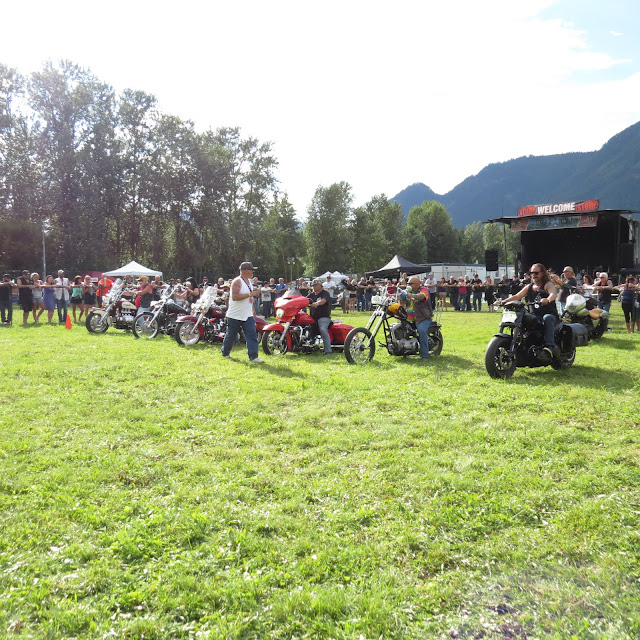 These guys and dolls had it all covered. No reason to drink and drive, on site ATM's so you could make sure you had a few bucks to tip the volunteers...it was utterly fantastic.

The sound stage was as fine as that of any major concert and the talent on it was incredible.

While the music and entertainers were truly very enjoyable, I love the rodeo games.

For me, watching people of incredible skill manoeuvre their machines through obstacles, slow racing and keg pushing, well it's just something I truly love. Friday night brought out some wonderful "gamers" and they put on one heck of a show. They won $25 worth of Stomp Bucks to spend in the Merch booth and Wade, the announcer and his infield crew were constantly giving away swag to the crowd.

Wade is one of the best announcers in the business.
He is so in to what he's doing, and he's innately funny too!

I was some whipped and so I only stayed for some of the early entertainment before my eyes and legs said that had had enough for one day.  I jumped in the shuttle and headed off to a most comfortable bed and a peaceful sleep.

I was up bright an early and had breakfast with George, Lori and their daughter. Mark Pearson rode me over to Serge's so I could drop off my motorcycle and Serge took me back to Joe Schmucks Roadhouse.

My bike was ready at about 2:30pm and Serge's wife picked me up.  The man is an absolute angel, he never charged me a thing (He cleaned and lactated the Allen bolts in place and topped up the fluid)! His kindness MUST be repaid!

So welcome to Serge's HD Repair, our newest business member in the RFBA!

I was able to interview two of the Merchandise gals from Barnes Harley-Davidson, a gent who makes cigar box guitars, a gal who has a welding business and makes some sharp looking sissy bars.
I interviewed Steve Hammer, Wade and Mike...and then we watched some incredible games.

I got to interview Darby Mills of the Darby Mills Project - I love that bold, ballsy gal.
She has a voice that comes from the centre of the earth. She pulls this huge, huge sound out of this tiny frame and it's awe inspiring.  Darby definitely loves what she does and there is a strength, I don't know what else to call it, in her voice that has been unleashed since she left the Headpins. It's richer, stronger... 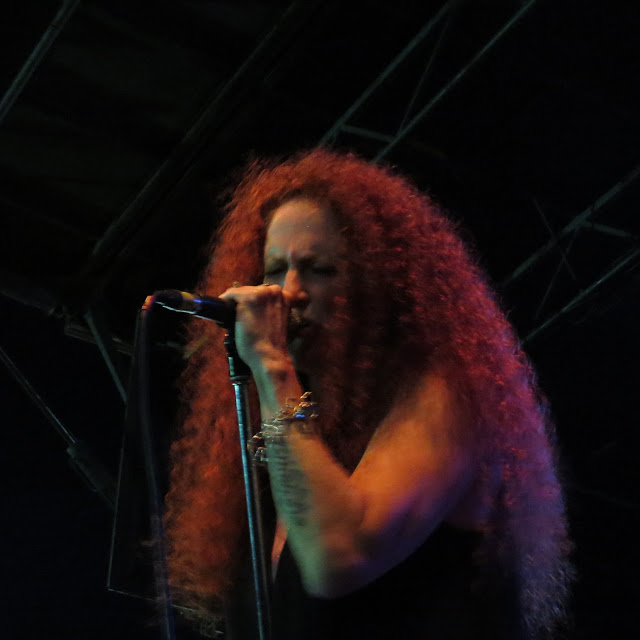 Maybe it's because this is Darby, raw and unleashed...and what an utterly amazing show she and her band put on.

In all Summer Stomp had 14 acts to entertain you and one of them was the High Energy Fire & More Show. My word that was amazing to watch.

There is no Romp like the Stomp and after 29 years it's still going strong!