Technology that could all but eliminate Parked Motorcycle Syndrome?

0 Beat the PMS Blues Online Show n Shine, Big Blue in Canada, Parked Motorcycle Syndrome, Solar Roadways 8:47 PM
A+ A-
Print Email
Imagine a world where snow and ice could be eliminated from our roadways, sidewalks and driveways by using solar panels to resurface them with.

I am intrigued by this technology and these folks, Julie and Scott Brusaw Co-inventors and co-founders of Solar Roadways, do seem to have a pretty good grasp on it and its capabilities:


I am not so sure that the inventors have fully taken into consideration the frost heaves and other challenges that building roads in the North encompasses, but, there are enough places where this technology could make a huge impact, quickly.

As the technology evolves, many, many years from now, it could be utilized in the North, I have no doubt of that!

Think of it, roads that generate electricity, that actually pay for themselves and preventing black outs. These kinds of roadways would make electric cars far more practical.
Sidewalks, parking lots, recreational areas would all become useable 12 months of the year.
Over head power lines would become a thing of the past too and we'd be able to reclaim our vistas!

And if they really did make them intelligent roads, as suggested in the videos, roads that can create a message letting one know of an avalanche, an animal/s or a boulder on the road, well, wouldn't that help save lives?

There truly appears to be an opportunity here. Yes it would mean that oil and our dependance on it would all but vanish, and it would cost jobs, but this new technology would also create all sorts of jobs; perhaps far more jobs on a global level than oil ever could!

Yes it would mean that many jobs like snow plowing and snow blowing would also be reduced, but again, this kind of technology and the infrastructure to make it happen, would create a vast wealth of new jobs not just in manufacturing, but construction, engineering, R & D etc...

Imagine charging stations in parking lots that cost nothing because the parking lot is recharging you!

Imagine the technology that would allow a vehicle to charge as it runs down a solar road.

Imagine how much "garbage" we could eliminate from landfills.

I am excited by this technology and it's possibilities in spite of knowing that there will be challenges and problems.  Perhaps the one thing that concerns me the most is that I am not sure about the impact to people and farm lands etc. from the electricity being spread out in this fashion.

Yes, there appears to be many positives to this technology, but it will be interesting to learn what the down sides would be and whether or not they could be overcome.

Here is the Ted Talk that inventor Scott Brusaw gave in 2010, it's very compelling:


I will watch with interest to see where this technology can take us as it is developed.

Perhaps one day, riders in the North and places where snow and ice prevent us from being able to ride year round, might become year round riders.  After all there is an abundance of heated gear offerings that could truly see one capable of riding year round if there were no snow or ice to contend with!

Until then, I along with many others, will be enjoying the bikes that are entered in the Beat the PMS Blues Online Show 'n' Shine.  You can enter your bike until January 30th! It's free to enter but you must be a registered member of www.beltdrivebetty.com - there are magnificent prizes like a BigBlue lift on the line!

Our presenting sponsor, BigBlueInCanada.com provided this article on one of the many benefits of BigBlue - enjoy! 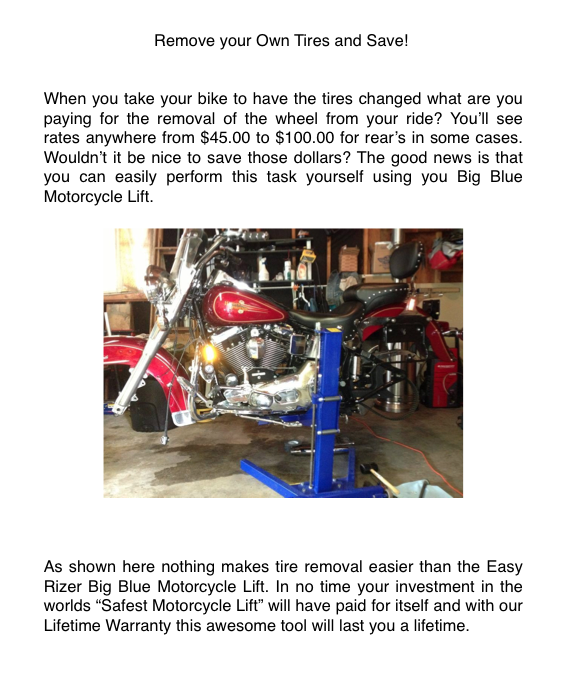 I look forward to seeing many a friend this weekend at the Edmonton Motorcycle & ATV Show!