Motorcycling in Canada - A Ride Through Our History - Part 7

0 A Ride Through Our History, AJS, Atlantic Canada, Atlantic Motorsports Park, Jack Canfield, Joe Bolger, John Johnson, Maritimes, Motocross, Roy Blakney, Suzuki 10:40 PM
A+ A-
Print Email
Atlantic Canada's motorcycling history is not as old as in other places of the country, but the history that is chronicled is as varied and interesting as that of any other region!

Motorcycle racing was not as big a pastime in Atlantic Canada as it was in other regions of Canada until the 1940's.  Car racing was the big thing!

Atlantic Canada has has it's fair share of people who have impacted motorcycling.

One of those people is Jack Canfield. Jack raced both cars and motorcycles and throughout the years his contributions to both disciplines are many.

From the time Jack was 14 old, he was racing and winning. During the 40' and 50's he participated in
scrambles, hill climbs, trials and dirt-track races taking home many a trophy. His accomplishments in the 50's and 60's include road race wins at Mosport & Daytona, but he competed all over eastern Canada and the eastern USA.

He became a sponsored rider with Suzuki after he took home the Canadian Motorcycle Grand Prix Championship trophy at Mosport. He won on a home built 250 Suzuki beating all of their factory riders!

Probably one of the biggest reasons that the name Jack Canfield is so loved and revered in Nova Scotia and Atlantic Canada is his passion and vision to see the Atlantic Motorsport Park in Shubenacadie, N.S become a reality. He not only spearheaded the park, but also launched the Atlantic Motorcycle Competition Riders’ Association.  Although Jack loved all motorsports, motorcycle racing was his passion and he contributed much to the sport he loved.

Heralding from Charlottetown PEI, Joseph Bolger lit up the motocross tracks in the 50's and 60's.
Like so many racers, his passion was derived early in life. Born in 1930, he owned his first motorcycle at 14, it was a 1931 Indian Four.  At 16, Joe moved to the States but retained his Canadian citizenship. The move was made out of necessity. There was little to no work available on PEI.

As a racer, he also found himself developing parts and tools to support the sport.

He designed and built footpegs, motor mounts, wheels that were lightweight and soon found his products being carried in the Motocross Engineers catalogue. Many of the speciality tools he designed were picked up by Honda and carried in dealerships across North America.

His parts caught the eye of another manufacturer, and in 1975, Yankee Motors released a special Ossa that sported the Bolger Long Travel giving their machine 8 inches of rear suspension travel.
Only 150 Ossa BLT's were ever produced.

Joe also had a passion for writing and was a long time contributor to both Cycle Sport and Cycle World magazines.

Roy Blakney of Moncton New Brunswick made numerous contributions to motorcycle competition He was an official, a promoter, a sponsor and offered his assistance locally, nationally, and internationally. He won numerous championships and races with his aggressive riding style between 1951 and 1966.

His list of firsts and seconds is amazing. It was estimated that he had logged over two million miles during his 71 years of riding.

Roy competed in Canada, the U.S., Australia, and New Zealand.


John Johnson was the Norton motorcycle distributor for the Maritimes.
He not only sold bikes but he raced vintage motorcycles.

In 1950, the bike pictured on the left was sent by Norton to Daytona to compete. In 1959, John Johnson used this machine and any Norton rider available to promote the races in the Maritimes.

In the early 1990's, the Norton Manx was brought out of the mothballs it had lived under for almost 20 years and Thane Gillies would race it while John maintained it.

a number of vintage races were won on this bike including the first of the reunion races at the original track for the Laconia Nationals held at Gunstock. In 2006 the Manx raced for the last time.  Gary Gates, pictured in the photo with John is the new owner of the Norton.
John Johnson was also well known in the Maritimes as a mechanic and machinist whose talents were heavily relied upon. His generous nature made him an appreciated sponsor of motorcycle racing and riders as well as a valued friend. Because of his passion, many a rider was introduced to the sport of motorcycling in the Maritimes!

I hope you enjoyed our short journey through the history of  motorcycling in the Maritimes.
Motorcycling has a storied history in Canada.  We have literally hundreds of racers and pioneers of the sport to thank for making motorcycling the enjoyable pastime it has become for so many.

While most of the historical facts and stories focus on the contribution of mechanics, engineers, machinists and racers, there truly is a more social aspect to the sport and that is touring and cruising.

Beginning back at the turn of the 19th century with bicycle clubs, the motorcycle became the natural benefactor of man's need to belong to a tribe and almost every club that was formed up into the 40's had a more social and less sporting side to it.  Road Riding was incorporated into pretty much every club that sprang up, but they all had their roots in racing.

In the 1940's the Red Devils opened up the first MC in Canada and our community would never be the same.

Join me next time as we explore the beginning of the One Percent culture in Canadian motorcycling.

1912 - Thomas Wilby and F.V. Haney make the first cross-Canada trip by car, travelling from
Halifax to Victoria in 52 days in a Canadian-built Reo

1923 - Drivers in Nova Scotia began driving on the right hand side of the road.

1927 - The first ever nationwide radio broadcast, was held to mark the 60th anniversary of
confederation, and could be heard as far away as South America and Britain.

1957 - Canada becomes the first country with a two screen theater.  Nat Taylor, owner of the Elgin Street theatre in Ottawa Ontario went on to invent the Cineplex or Multiplex style of theatres.

1964 - The Canadian Social Insurance Number comes into use. 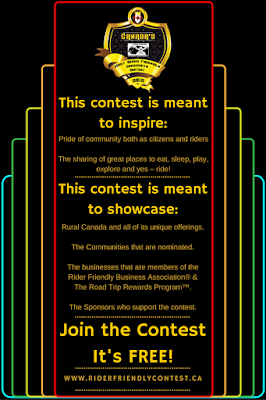 All data and information provided on this site is for informational purposes only. The Belt Drive Betty Blog makes no representations as to accuracy, completeness, currentness, suitability, or validity of any information on this site & will not be liable for any errors, omissions, or delays in this information or any losses, injuries, or damages arising from its display or use. All information is provided on an as-is basis.