The good, the bad and the very ugly

Our military is in the headlines this week and it is not a pretty thing.


Here is the link to the Maclean's article preview: http://www.macleans.ca/news/canada/our-militarys-disgrace-a-preview-of-our-latest-cover-story/

Rape and violence, these are among the topics of the investigation by L’actuality and their sister publication Maclean's.

Our military has reportedly had these problems for a lot of years.
And sadly, so has our R.C.M.P.

But it's not just about what happens at work.

In the US, this article from the Free Thought Project states that 1 in 4 women is a victim of domestic abuse but that number is 1 in 2 for police officers spouses.

The Canadian Dimension article from October 2015 suggests that domestic abuse in Canada by police officers is handled very badly by the police services:

Begin Quote:
As bad as things are in the U.S., by comparison Canada and other countries are in the Stone Age in taking action or acknowledging the problem. In the Montreal and Halifax police departments, less than one percent of male officers who commit domestic violence may face a criminal charge, according to calculations based on discipline records. The situation is even worse at the RCMP—even after Jocelyn Hotte’s shooting rampage. The RCMP disciplines Mounties more harshly if they steal or make a false statement than if they attack an intimate partner. A male Mountie who assaults his wife or girlfriend may have as little as a one-in-6,500 chance of ever facing a judge for his crime. End Quote


Not surprisingly, the Canadian Military also has it's issues with spousal abuse.
The CBC reported on the issue in 2011.

Police Officers and Combat Military Personnel and Veterans all become broken human beings at some point in their careers.  Some become far more broken than others.

My personal belief is that there are a number of factors at play here.

The very nature of the jobs these people sign up for is centered around violence and dealing with the worst of the worst in humanity.

Some of the people who come to these jobs already have ego issues or anger/aggression issues but are successful at hiding their true nature for a long time, until one day they loose their grip. Others have superiors who turn a blind eye or ship the bad apple out to another detachment or unit to get rid of the administration headaches.

Others are good people who over time become jaded by the filth they have to deal with on a day to day basis, who slowly begin to loose a handle on their own sense of morality and decency.
Their moral compass shifts.

Yet others are plunged into the depths of darkness over a single horrific incident that haunts them.

The darkness and pain has to have somewhere to go and if it is not being dealt with in a constructive way like counselling, things can go off the rails.

From everything I have read, it appears that most of the "offenders" in these rape and violence cases are male. And that does not surprise me.

"Weakness" in the military is frowned upon, the same in the R.C.M.P.  and other police services.
You have to be mentally tough to deal with a lot of the situations these people face.
You have to have your "brother/sister's" back. They need to be able to rely on you and so a sign of cracking under pressure could be a death nell to your job when it comes to your trustworthiness in a crisis situation. Hence showing any humanness means your livelihood becomes jeopardized.

You truly are a cog in the wheel, a piece of machinery and when you break down, when you are going sideways, you run the risk of being discharged and worse.

Too often no one notices and so no interventions take place.
Due to the fear levels the victims have, often times many are hurt before the "situation" ever comes to light.

The violent, grotesque and often cruel world these people live in while on the job, takes a huge toll on their psyche. The military and police services in particular, are very good at making people into "soldiers", into order followers, into people who turn off the pain, the degradation while on the job, but as the horrors come to them through their mind's eye, in a crowded room or in their dreams, many crack.

Eventually some of them totally crumble. Without help, many become lost.

Many times, the victim becomes a victimizer.

The problem is not with the majority of these human beings, but rather with a system that does little to address the mental health needs of it's people.

If the "management" caught the warning signs and got these people the support, help and tools they need, things wouldn't have to degenerate the way they often seem to.

That is the SHAME GAME.

If they only knew that it's NOT WEAKNESS at all but HUMANNESS.

I don't care how tough you are, how strong you think you are.  If shown enough horror, enough cruelty, at least one of three things will happen, if not all three:

1) You will become so angry, so filled with a sense of impotency that the rage damned near consumes you and you take it out on everyone around you especially your spouse.

2) You commit suicide either physically or career wise. By that I mean, you drink and drive (Self Medicate), you pick fights, you become overtly aggressive - a bully...you become a problem child in other words.

3) You find the right help and support and begin living a better, healthier and more balanced life.


Our soldiers, veterans and police have more than a hurdle or two to overcome.


The New Veterans Charter  still does not provide for them adequately, in spite of the Equitas agreement, for if it did, the bureaucracy would have changed hugely, especially with the high profile cases mentioned below, but it has not.

From my personal experience talking with veterans, it hasn't improved for a lot of them.
Their case managers are burnt out and overworked thanks to so many VAC offices closing, which means the bureaucracy is worse than ever.

Some of the policies and procedures are border line cruel when it comes to benefits and supports.

Case in point - Eric Magill - when you read his story in the Trenton Trentonian Newspaper, you will shake your head at the lunacy.

He lives in Trenton Ontario and has been given a wheelchair with California wheels on it, the wrong wheels for his terrain and the brakes don't work. His house is not wheel chair accessible, neither is his vehicle and why? Paperwork issues. Bureaucracy. 14 YEARS WORTH.

And how about the case of veteran Paul Franklin- his legs were left behind in Afghanistan, taken by an suicide bomber and yet every year he is asked if they have grown back.

The degradation of needing support and being treated like an unworthy/manipulative human being is cruel.

If prisoners were treated in this manner, the John Howard Society or someone would be advocating loudly for them.

The Equitas Society was formed to combat the inadequacies in the New Veteran Charter and while an agreement was reached in May of 2015, nothing much has changed.

Psychological supports are even tougher to get than the physical supports like a wheelchair and sadly, I personally know of stories where spouse's of soldiers with PTSD and other mental challenges are told to run far away, take half of everything and go.

No family counselling, no real help. Instead - destroy a family.

I have lost military friends to suicide. The devastation to their families is enormous.

Sadly, I get why these people blow a head gasket and why so much abuse and suicide exists.

The combination of the rigours of the job, the sometimes inhumane treatment at the hands of superiors and bureaucrats becomes too much and voila, the perfect storm.

I admit I am no psychiatrist or psychologist, but I have heard these heart wrenching stories enough to know that I am not too far off in my interpretation of what takes place. At least for some.

It's tragic. But, we can do something to help end some of the degradation of suffering for one man... 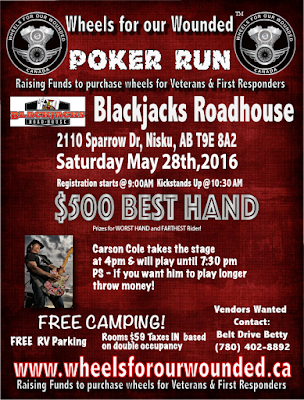 I hope those of you who can will join us in Nisku at Blackjack's Roadhouse on May 28th for our Wheels for Our Wounded Poker Run - this year we will be riding to help Eric Magill.

This poker run will be the kick off our national Crowdfunding Campaign that we are launching for him.

With Branch #389 of ANAVETS as our new partner, we are going to be able to provide those who need or wish to have a charitable donation receipt when you donate online or mail cheques.

We are just waiting for the new bank accounts to be opened and the PayPal account for ANAVETS to be set up!

We intend to raise funds through the crowdfunding platform until we have raised all of the money we need to fund the scooter conversion project for Eric.


If you are blessed to be riding these days, please remember to ride like everyone around you is blind and cannot see you and please consider dressing for the slide and not the ride.