Across America on a 1919 Henderson Motorcycle? A Q & A Interview with Mark Hunnibell 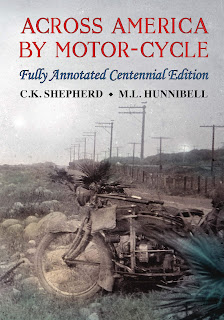 Across America on a 1919 Henderson Motorcycle?
A Q & A Interview with Mark Hunnibell

I had gotten the information about this man, Mark Hunnibell and his fully restored 1919 Henderson and the trip he has planned, see below.  I knew I wanted to know more and thought I'd share what I learned with you!

"Royal Air Force Captain Charles Kenilworth “C.K.” Shephard explored miles of territory on his trip across America outlined in his book Across America by Motor-Cycle, published in 1922. Nearly 100 years later, United States Air Force Captain Mark Leslie Hunnibell retraces C.K.’s path in his own book. With annotations and updates, anyone with a wanderlust to follow C.K. Shepherd’s original adventure can now do so with the benefit of additional 250 photos and illustrations, 750 detailed notations, and thoroughly researched facts to fill in the gaps of the original story. In addition, the centennial book includes many photos by C.K. Shepherd never seen before, plus a foreword by his son.

This summer, nearly 100 years later, Mark will be retracing C.K. Shepherd’s original journey on his own vintage 1919 Henderson four-cylinder motorcycle in an exciting trip that will be shared to the world via social media including Facebook Live, drone video and to newsletter subscribers. Also, Mark has planned stops along the trip of over 4,500-miles for book signings, media appearances, rallies, and events."  Angela Melamud, Author's representative.

The 1922 book, Across America by Motor-Cycle, is the story told by Captain C.K. Shepherd, a Royal Air Force (RAF) veteran of WWI from England who crossed America by motorcycle in 1919 after the war. In mid-June, within two weeks of arriving in Manhattan, C.K. bought a top-of-the-line Henderson four-cylinder motorcycle and was hot on the trail for California. In 1922, C.K.’s book was published, the story of his transcontinental journey in the summer of 1919 through sixteen states covering nearly 5,000 miles.

I discovered C.K.’s book about his 1919 trip some 20 years ago and was inspired by the epic journey on the same kind of motorcycle I owned and was ever-so-slowly restoring. I became consumed with the idea of retracing his journey, but the book lacked a detailed itinerary, leading me to complex research in order to reverse engineer the route. In the process, I discovered many details about C.K.’s ride and life that I thought many would appreciate even if they had never read the original book.

#2 - Besides the restoration of the bike, how long have you spent planning this journey?

The planning in earnest has taken about five years, mostly part time as I had available. It involved thousands of hours of analysis of the 1922 book and searching out period publications as to available roads, routes, and other conditions. The byproduct of all that planning is my new book, Across America by Motor-Cycle - Fully Annotated Centennial Edition, that includes C.K.’s original 1922 book but embeds nearly 1,000 photos, notes, and illustrations that I found along the way to tell as much of the story as is possible. C.K.’s book documented an amazing journey but regretfully did not include many details of the trip and the man who took it. This book answers them all.

#3 - I see you need a logistics person, and connections to the riding clubs - have you found someone to help you there?

I think I have the minimum “safety rider” aspect locked in (someone to ride along, check the road ahead, warn me of unexpected issues, etc.) but I am suddenly in need of someone to drive my truck and pull my trailer that will have parts for en routesupport. I am disappointed to be left hanging at such a late date but that doesn’t fill the seat, so I do need help. Even if someone could drive for a few days and then head home after the next person showed up, that would work. I just need to nail this down ASAP because it is, all of a sudden, a huge distraction I did not expect to be dealing with.

#4 - Why should people get involved?

For C.K. Shepherd, this was a solo trip, on his own, to see America and meet Americans. For me, I am interested in seeing America and meeting Americans, but I can’t do it alone. Too much traffic today and there are no more Henderson dealers in every city to overhaul my engine every 1,000 miles like C.K. ended up having to do. So folks can help out in a grass-roots fashion to become part of history, witness an amazing century-old machine in operation, learn more about America’s early history with roads and interstate tourism, and – perhaps even more helpful – educate me about what they know of the regions through which I will be riding.

I am going to be able to accommodate a limited number of motorcyclists who may want to “ride along.” I have received a sanction from the American Motorcyclist Association as a Grand Tour, and will have all the forms and will start each day with a rider’s meeting to go over the route, the stops, the challenges, and issues. Any motorcyclist who wants to ride with me can go to the “Support” page on the web site (I will be posting the forms soon) or just email me at support@acrossamericabymotorcycle.com. Even if they don’t want to (or don’t have a bike to ride along), I will be travelling on a published schedule, so folks can visit with me at planned stops or even just wave at me while I roll through their town. The web site will be maintained with the latest schedule and we’ll update it during each day’s ride in the event delays or other circumstances arise.

Even if you can’t get out for the ride, you can live vicariously online, watch it all unfold on the web site, Facebook, Instagram, YouTube, Twitter, etc. Besides income that will be generated by sales of my new book and my audiobook of the original 1922 book, I will also have in my trailer a bunch of commemorative t-shirts, ball caps, koozies, and even some temporary tattoos. I’ll also have the available for ordering on the web site soon.

#6 - Anything specific you'd like the public to know about this trip?

I am not a life-long motorcyclist. In fact, I am a true novice motorcyclist, with this 1919 Henderson being my first real motorcycle (I got my license on a 50cc Honda Express in the summer of 1980), so I have some apprehension about my own abilities. C.K. was 24 years old when he took his trip. I will be almost 62 years old when I get to San Francisco. While C.K. had no support structure following him on the road, the need for support that I have creates numerous logistical issues that C.K. did not have. Luckily I have supporters, friends, mechanics, and experienced motorcyclists that have been helping me and will continue to be supporting me during this ride, leaving me confident that this will be the rewarding and enjoyable dream I have been longing for.

All of the above said, it should be evident that I will need (and appreciate) all the well-meaning advice from the public. If you know of a “must stop” or “must see” location, PLEASE do not hold back. Write to me directly and I will see if I can make it happen. This trip will be far more successful if it becomes a participation event.

#7 - Anything special about the bike overhaul you'd like us to know?

The overhaul on this bike has been beset with false starts and endless delays. Even today, there are issues. But I am confident it’s ready to make the trip and carry me safely across the country. I have the beginnings of the long story of the rebirth of my motorcycle on my website (Mark’s Henderson), but will be augmenting that with some photos and videos taken along the way. Suffice it to say that, if this motorcycle was anything other than a truly one-of-a-kind original Red Henderson, and was equipped with anything other than the original chassis and engine, I would not have felt compelled to finance the extraordinary efforts at resurrection to bring that particular engine back from what would have normally cause it to be declared dead. 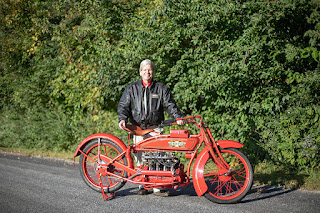 So there you have it folks, another interesting event to be a part of, one that will be added into history books I am sure!