Things that make you go hmmmm

0 Canadian Riders, Motorcycle Community 5:20 AM
A+ A-
Print Email 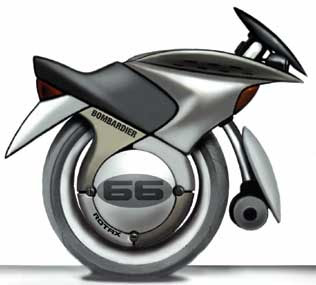 I was doing some research on the Uno - I wanted to find out more about it. I went on to the Dragon's Den web pages on the CBC site and was reading the comments about the funding of the Uno and there were a ton of opinions similar to mine - great concept, safety issues, insurance and approval issues. Some say it's an improved version of the Segway, others say Bombardier's Embrio which won Business Week's 2003 Design Awards for its category.

The Uno is fueled differently from the Embrio (pictured here) but they are very, very similar to each other.

To see the Uno: http://www.the-uno-tomorrows-transportation.com/


I was highly puzzled by this astute group of people on the Dragon's Den deciding to fund the Uno.
If you have watched the show - they evaluate businesses and their viability and then decide whether they will fund them or not. Now if you sell 20% of your company for 1.25 million dollars that means the company is worth 5 times that - in the case of BPG Technologies - Mr. Gulak's company that designed the Uno that transcends to 6.25 million dollars.

I am not puzzled any more. Brett Wilson - one of the Dragons is on the board of directors for BPG Technologies Inc. Whether he became a member of the BOD before the Dragons Den show about Gulak's invention or after is not clear. But I was right - the funding of Gulak and the Uno has a whole ton to do with the brilliance they see in this kid and I quote from the BPG Technologies web site: Brett said, “I invested in UNO because it is an exciting project but my investment is also a call on the creativity and genius of its inventor – Ben Gulak. I really do expect UNO to evolve considerably from its prototype to whatever commercialization version becomes – and I am excited to be a key investor in this stage of the evolution of Ben Gulak and UNO.”

So there you have it - I give full kudo's to the kid for securing the funding and I have NO doubt that he will go far...he's obviously brilliant - but - what does this do to the credibility of the Dragon's Den show?

If you watch the show - they are pretty hard on people who have business concepts and valuations that appear off....

I was at the cenotaph with hubby yesterday and was pleasantly surprised by the number of children who were present. It seems that more and more young parents are getting it.

I am not sure about the indoor service in Grande Prairie or how well attended it was - I never go to indoor services. I guess it's a throw back from my younger years. I remember my dad who served 7 years in the RCAF saying "Our soldiers put up with all kinds of horrible conditions no matter where in the world they are deployed. The battlefield offers few amenities - so if they are willing to sacrifice their lives and comforts - you can put up with the cold for an hour - it won't kill you. Its a showing of respect." Those words, that attitude has stuck with me all of these years.

While at the cenotaph I recalled Cpl Mike Starker of the Canadian Veterans MC who was killed in Afghanistan in May...I had met Mike in Calgary in January...I can only imagine how JD, Mass, Anthony, Dave were feeling yesterday....

Keith from Saskatchewan wrote me saying " I realized how much we as a crew(scooter people) outcasts, have to be thankful for! Our veterans history made us what we are today! The way they broke ground to make biking a freedom for all to enjoy! Just in a grateful mood for what I am today, and have been thinking bout my Dad the last couple days, he wouldn't talk about it(war) I still wonder why at times but we as a family always gave him the freedom not to!
Asked once, left it alone!"

Many people have a reason to remember - what is yours?

Please, if you are lucky enough to live where you can still ride - Stay safe, ride like they are out to get you...