A great name for my Beaver mascot!

0 Beaver mascot, Travel 5:56 AM
A+ A-
Print Email
Everyone, I would like to introduce you to Road Trip Rita, my new sidekick... 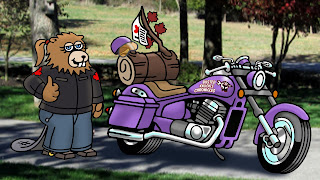 The contest to name her had me sitting on the edge of my seat, after all it was bikers naming her...we had so many great names that were offered up and I want to thank everyone who submitted a name and everyone who voted!
Karen Doerksen of Calgary is the winner of the "I named Belt Drive Betty's Beaver mascot Contest" and Rob from Hillbilly Jack's in Vernon - our Tee Shirt supplier, will be sending Karen out her Tee Shirt!

Steel Tattoos & Body Paint from Irricana is creating a sculpture of Rita and she will be a busy beaver this summer riding with me across Canada!

Thank you to everyone who helped us find the perfect name!!!!
A special shout out to author and cartoonist Paul Jamiole for creating Road Trip Rita for us...who knows, maybe one day she will become one of the animals in his "Bikers are Animals" children's book series...

Now - for those of you who don't get the Busted Knuckle Chronicles, our weekly community newspaper, I want to share with you my editorial.  I am quite sure there will be some who read this who can relate....


My Psychiatrist is back – well almost!

PMS – Parked Motorcycle Syndrome – a dis-ease that can kill…the soul.
I have often wondered what it would be like to live in a climate where you can ride year round.
It would have a lot of advantages and yet, I am glad to live in the north.
The summers in the north are generally pretty amazing.

Our days are longer, there is far less traffic to contend with, the air is sweeter and while we may not have the hairpin twisties that can get the blood pumping, we do have glorious sweepers and beautiful valleys to ride.

Where I live, Grande Prairie, we are only a two – two and a half hour ride to the mountains.

I feel like I am one of the luckiest riders alive - IN THE SUMMER anyways.

Between where I live, and the job I do, I am on my bike pretty steady clocking an average of 20,000 K a year and more. I love it.

But the winter and early spring cause a slow and very painful death.
Smiles don’t come quite as easily, tempers get a little shall we say, short.

There is a tension that builds all winter long in we riders from the north.

It builds, and builds until you feel like your head is going to explode. Your soul hurts.
And because of that pain, there is something we northern bikers get, that those who can ride all year long can’t truly fathom.

We understand just how sweet that first ride for the season is.

When you get to ride all the time, well, it’s like anything else, familiarity breeds’ complacency.

The sweetness of that first ride of the year is directly proportionate to the length and harshness of the winter, and the worries and challenges of life.

No matter how cold the wind is – it is that wind we crave, that feeling of utter freedom, when your soul takes wings and fills with the peacefulness that only uncertainty can bring.

The sun on your face...the wind kissing your skin, the tingle of adventure!

We dream of it, yearn for it and yes; our bodies seem to literally ache for it.

The PMS isn’t too bad to deal with in the beginning– like every other deadly dis-ease it comes on quietly.

In October, or there about, when you first put your bike to bed, there is a profound sadness; a grieving that takes place. When the snow hits the ground you are resigned to the fact that you and your sanity connection are going to part ways for a while.

You start flipping through parts books, ogling at the chrome bits and goodies on the computer.

You spend a lot of time admiring other people’s bikes, getting ideas of the things that you’d like to give your special baby and that goes on through November. You daydream a lot, and those around you complain that you seem a little vacant.

December’s bustle of getting ready for Christmas and in my case, getting ready for the January tradeshows keeps one occupied. But occupied does not mean peaceful and sometimes it doesn’t always translate to pleasant either.

And then the January motorcycle shows hit and you are surrounded by shiny chrome and leather, all those friends you haven’t seen in months are dropping by the booth - the talk is all about riding.

Where you’ve been, where you are planning on going and what’s going on and coming off of the bucket list.

All the talk about rides and being surrounded by gobs of chrome and leather do nothing whatsoever to alleviate the pain.

In fact, it is in January when the pain begins to increase. It’s like an exquisite form of torture.

By March, you (read that as I) aren’t fit to be around. You are pacing and waiting like an expectant mother. You can smell spring in the air. You are restless, agitated and just generally surly. And when you are a female – WELL - those who don’t know you very well are sharing knowing and sympathetic glances with their buddy – your husband.

You can see the “You poor bast*%d” look written all over their faces.

My husband knows me well. And he has a devilish sense of humour.

A few of his non-riding buddies from work stopped over not that long ago and I was in a sour mood.

I overheard him tell them to ignore me, that I just had a case of PMS. As I came around the corner into the living room, I could see them looking at him with raised eyebrows for throwing that out there so casually, with me in earshot! The one guy looked at him almost in admiration. You could almost see the look of disbelief that Charby was so cavalier in throwing out that dreaded term in front of others… and that he wasn’t ducking.

Of course once they understood what the term PMS means in our world they were full of laughs and teasing me but that one moment was priceless.

The days have been getting warmer, longer and the snow is starting to melt, the roads are dry and my temper has become shall we say – SHORT. I have had a lot on my plate, between having three people I care about die in rapid succession and what that means for the paper since they all wrote for it…and I have had my share of disappointments when it comes to people not living up to their word and causing a ton of extra work to be dumped in my lap.

My ride is not together yet.

I dropped my tins off to be painted back in October and they haven’t come back yet.

So here I sit, listening to the first bikes of the season going by my house.

My heart is happy to hear that sound again, but unlike years gone by, I am without a ride.

Every bike that went by on Friday and Saturday was met with a “You lucky Bast*%d, YOU SUCK….”

My PMS is at it’s all time high – and I swear it really can kill – it kills the soul.

There is nothing more pathetic than a crusty old broad frothing at the mouth, the pain in her soul screaming for some relief and her eyes green with envy.
Then something magical happened.

My wonderful husband fired up his bike in the garage and rode it down the icy back lane and parked the bike in front of my office. And then he handed me the keys and said go – you need it.

I have only ever ridden my husband’s bike twice. It’s not something he gives up easily…

I get why that is. It’s the same reason I seldom give up the keys to my ride…

And so after an ”Are you sure?” I ran out the door before he could change his mind.

As his Road King came to life, something inside me shifted.
I felt the first true smile in months, come to my face.

It’s not really warm out, about 2 degrees, but warm enough if you layer up well.

Still lots of gravel in the intersections and corners…

I never got out of third gear, never went out on the highway – just a few loops around the bypass and up and down a few side streets, but you couldn’t knock the grin off of my face with a 2 x 4.

As I rode, the thoughts of the work that has me buried, the heavy responsibility of having people relying on me for a pay cheque, the disappointments over some people and their lack of integrity, the loss of William, Lisa and Kaylee, my dad, my brother and all the others who have left me behind on a journey they had to go on alone, the worries over my mother in law who isn’t well and a million other smaller cares - finally left me alone.

All of that chatter inside my head quieted.

There is no better way to get your head screwed on right than going for that first ride of the season. 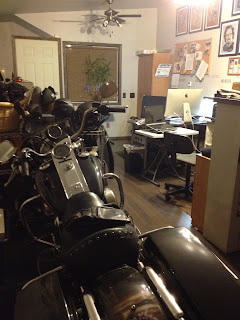 It is the sweetest ride of the year because it relieves the most amount of pain – I know tonight I will sleep better than I have in months, my psychiatric session only lasted an hour, but the relief was sweet and immediate.

I want to thank my husband for knowing me so well and for letting me ride his bike to take the edge off.

I am anxious for my parts to get here and my own ride (read Therapist) to be back together, but for

now, I am happy to have the “Rain King” grace the parking spot that is reserved for “Black Betty”.

Have a great Thursday everyone...
Posted by Belt Drive
Share to: