0 #Firefightershugsarethebest, #ILoveFortMac, Firefighters, Kindness, Mac Island 11:10 AM
A+ A-
Print Email
In the last instalment of My Time in Fort Mac, I left off with having had my stuffed Dalmatian firehouse dog, "Lucky", gifted to me by Jim of the Leduc Fire Department, absconded with.

I have no idea where he went, who took him, or if they felt they needed him more than I, all I knew was he was gone and Brittany and Becca hadn't seen anything.

Now I am not one to normally cry.

Get mad yes - tell some one where to go and how to get there - sadly, I still do that sometimes...

But for me to actually cry, well it means I have been either been wounded to the core or moved beyond words.

Jim's gesture and that of his fire crew meant a lot to me.

This was the second time I had something taken from me while on Mac Island and I felt pretty violated. (The first time involved a homeless man taking smokes out of my duffle bag and me catching him.)

Late on Sunday afternoon, Keltie-May Nicoll from Leduc Fire and I were talking and I told her that someone had taken "Lucky", about 40 minutes later she sought me out with a replacement.   She had me in tears.
We hugged and I thanked her from the bottom of my heart.  Nicole took a whole lot of sting out of the day - she literally saved the day!

There were some little red bags that could be used as backpacks kicking around and so I grabbed one, put "Lucky" in to and never let him out of my reach for the rest of my time in Fort Mac...

This had been a very discouraging Mother's Day. It had started out well, but from the time I discovered "Lucky" was missing to the time I walked out of Fort Mac at 10 pm that night, it was pretty much a "shit day".

You see, I was interviewed by an RCMP officer regarding two young men who had taken items out of the Marks Work Warhorse  and Canadian Tire stores on I think it was Thursday and Friday. These young men tried to tell the police that they got their orders from me.  As I explained to the Officer, I didn't ask them to get me anything. The only man who got supplies for me was a man named Mitch who was accompanied by the Assistant Manager of the Sobey's & Safeway stores on many a trip and  he would come to me and ask if I needed anything.

A little while later, this same officer comes back to get a recorded statement.

And a little while later another interview over these same young guys, this time with both a male and female RCMP officer. Again it was a recorded interview.

By this third interview I was pretty upset.

These two young guys had a little pick up with a small trailer they were towing behind and they had been working their butts off. They had hauled fire extinguishers, cases of bottled water, they had rescued animals and just seemed to be helping all over the place.  We never really got to know each other as they'd come in to our area, drop off whatever was meant for our station, then doodle off to drop other items off.

I am not sure what business they went into the first time, or with whom but they told me they had gone with a police officer and a firefighter had gone and gotten gloves, flashlights, safety glasses and other items that apparently the fire teams were looking for on Thursday night.  The next morning they had gotten coveralls, tee shirts, vests, socks...and dumped them on the sidewalk infant of my station which I was not very happy about and so they went about the task of sorting them and making sense of things instead of this huge heap of stuff.

Well apparently these two young guys had just decided on their own to go and get these things.
When the RCMP arrested them, they tried to blame myself and another person for ordering them to go get these items.

I was pissed for a number of reasons.  Number one, while I may have a "let's git er done attitude", I would NEVER ORDER anyone to go take supplies unless I had permission from an owner or someone in charge at the command centre.  I was here to feed people, to purchase the supplies like tobacco, moleskin, foot powder and air masks that could not be had in town at that time and to coordinate donated food and personal stuff - period.

In fact, I had several people call me, give me their addresses, tell me about their freezers filled with meats etc and give me the codes to get into their houses and permission to do so.  I never acted on those offers.

I was upset at tax payers money being wasted on this entire ordeal. Three times of being interviewed over the exact same incident was getting old.

These young folks weren't taking items for themselves - they were doing their best to help out. The stuff they did take went straight to first responders who truly needed these things.


We, at that time, were in a state of emergency.

Theses two young fellas were not looting for personal gain. They didn't take TV's or anything like that, they took things sox and safety glasses and flash lights, vests and coveralls.

I feel bad for these kids, but I was pissed too that they tried to blame me for directing them when I hadn't.  None the less, these kids were, I believe, very sincere in their desire to help.

I get that the RCMP had to do their job, the incidences had to be reported for insurance etc., but I felt that three times was over the top.

It's one of those double edged swords, none of these officers were anything but polite and apologetic, telling me each time that they had been tasked with doing these interviews.

Kimmy and Tony, some friends of mine from Provost, had brought up a trailer earlier in the day and we got it all set up. They had the fridge stocked, sleeping bags and pillows and supplies for the first responders - OH and they had brought some movies!

Well - the plan was, we gals would have a girls night. There were four beds, and Lynda and I would leave in the morning as Lynda was on her way down with my car to pick me up.  I needed to be in Two Hills for Tuesday Night as this wonderful small town north of Fort Saskatchewan had just won our inaugural "Canada's MOST Rider Friendly Community Contest", and I had meeting with the community leaders and a presentation of a trophy and some road signs to make.

Well wouldn't you know it, my request to have Lynda drive in for the night to take me home in the morning was turned down.  As was the request for the Tim Horton's van and some masseuses who were willing to come up and provide some therapeutic massages to firefighters for free.

It appears that the reason for so many things being turned down and so many things about the Mac Island staging area changing in "feel" was due to Task Force 2 moving in, in advance of the Premier's visit.

I was tired, I was feeling pretty abused and all I wanted was a good night's sleep.

But that wasn't to happen.

I asked the guys at AEMA how I was going to get out to the highway to meet Lynda, my ride out and was told that there was nothing they could do to help me.

Feeling defeated, I headed back to the Suncor Centre and the gymnasium that was the gathering place for those eating from the BBQ and ran into a friendly face. Holly from Mobster Towing.

I explained my predicament and she agreed to give me a ride to the Anzac check stop but that is as far as she was allowed to go and we had to go now cause she was on her break. I had left my cooler and Lynda's big blanket and sleeping bag behind with Brittany and Becca, I folded up the other blankets and put them in a box for someone else to use.

I said good bye to girls and grabbed my two duffle bags and walked out to Holly's tow truck.

It was about 10 PM when I got to Anzac and it was 11 pm before Lynda made it to me.
In the meantime I sat in a car with some young people who were waiting to get in to rescue animals.
I was thankful because it was some cold out.

When Lynda arrived, I hopped in the driver's seat and we drove as far as Wandering River and I climbed in the backseat and had about a four hour snooze and then headed home, Lynda was curled up in the passenger seat with the seat warmer on.

While I was driving to Wandering River, I got a text. It was from Brittany telling me that I could get a ride out in the morning but that was all AEMA could offer me.  I thanked them but explained that "I had already left, remember, I had said goodbye?" From then on I had zero communications with Brittany & Becca, which concerned me but I stayed in communication with Jeremy daily so I could help coordinate supplies.  I never thought to ask Jeremy who was now using Kimmy and Tony's trailer if he had picked up my cooler and Lynda's king sized blanket and sleeping bag.  I guess I should have because now these three items are also gone.  Oh well, it's just stuff and obviously someone needed it more than we did.

The whole drive home I had this plan formulating in my head to help first responders in the future.
I drove Lynda crazy talking it out I am sure.

Up by Sucker creek First Nations, an enormous mountain cat went bounding across the road.
Both Lynda and I were awestruck at his size. He was obviously fleeing the fires, and it was only two big leaps and he was across the highway and one leap and he was in the bush.  He was magnificent. 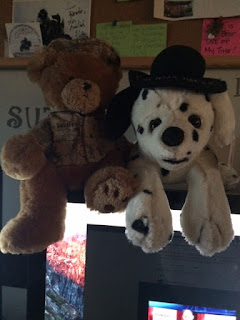 I was so happy to get home mid-day on Monday, May 9th. I lent Lynda my car for the afternoon so she could get some things done as her truck was in being fixed. My hubby had to go to work at 2:30 pm and so I ended up having a long soak in the tub and then hit the hay, sleeping for about 12 hours straight through.

I was happy to sit at my desk on Tuesday morning, May 10th making out paycheques for my contractors with my two guardians looking over me...

Thank you Keltie-May Nicoll from Leduc City Fire Department for saving the day, that one small act of kindness got me through a really, really crappy day!