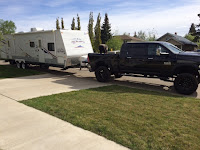 She is the gal who without hesitation volunteered her truck and travel trailer and herself as the driver to get supplies up to Fort Mac's first Responders.

Lynda was a day later getting back to Fort Mac than she wanted to be.

She had taken her truck into GP Chrysler because it had been running so badly the last
150 K into Fort Mac and it did not improve on the way back to Grande Prairie either.

GP Chrysler changed the fuel filters, oil and filter and a headlight for her for free for what she was doing to help the fire fighters and other first responders.

At one point on that first trip in, the truck "ran out of fuel" in spite of it having a full slip tank to draw from.

We sat for a while and some gents came over to see if they could help.
After a few minutes the truck started up again but failed a little ways up the road. These same folks followed us for a while, good thing too. It was odd, we thought there must be an air bubble in the system and or a plugged fuel filter.

The truck started up, ran about 5 miles and quit again.

After checking everything that could be checked, we started the truck up and the fuel gauge started registering fuel and while the truck seemed to be revving awfully high about 2,200 RPM when it should have been down around 1,900 - it seemed to run not too bad.

After we got done feeding RCMP officers on the highway and the fire was a bit more under control along the hi-way we headed into Mac Island.  Lynda and I worked through the first 5 or six hours and when Jeremy came up he had picked up a filter for Lynda's truck and attempted to change the one.

Things did not go as planned and so I got about a two hour nap in and then Lynda took one for about 4 hours before she headed for Grande Prairie. She had left about 7 pm on Thursday May 5th.
She arrived back on Saturday May 7th in the early morning, about 6 am.

Saturday was a hectic day. There were so many new crews coming in and crews going home.

Lynda had brought in some much needed supplies for people and we had gone around to each fire rig and made sure every truck had electrolytes (Hydralyte) and every fire fighter who had complained about their feet had the supplies they needed be they insoles, Gold Bond Powder, Moleskin etc.
We delivered tobacco to a few, gum to others and made sure everyone possible was stocked up.

She also told me of her harrowing trip back, with a sick truck and a tunnel of fire she had to drive through.  When she left Mac Island, she stopped at the road block and the RCMP had told her the road was good. But, by the time she was 60 Kms away from the Anzac road block (about 75k out of Fort Mac) there was fire on both sides of the road and the ditch in the middle. She said she had never been so scared in her whole life.  I can't freaking imagine how scary that combination of sick truck and a tunnel of fire must have been - words absolutely escape me.

Poor Lynda, Her truck, her new to her truck that she paid really good money for was sounding very sick.

She and her daughter and son in law basically unloaded, handed out supplies and then they had to head out.  She needed to limp her truck back to Grande Prairie Chrysler where her Bulldog Computer was diagnosed as a fail.

I worried about them on this trip back and was relieved when I got her text message that she had finally made it home a 7.5 hour trip took them over 11 to complete.

The bill was not covered by the extended warranty she had purchased with the truck.

Although GP Chrysler did discount the bill it still cost Lynda $1,500 + tax out of her pocket.
Money this small business owner really didn't have to spare. 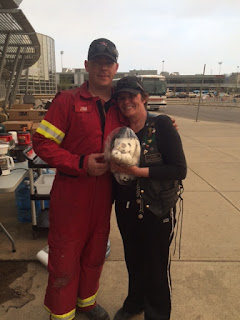 Her truck was finally repaired late in the week and so that was the end of Lynda's journeys with us.

I wrote a letter to the dealership and asked them to make a plea to Chrysler Canada but as I write this I have heard nothing back.  If I had the money, I would just give her the money, but I don't so we are going to figure out a small fundraiser for her.

Saturday was also an emotional day for me as Jim from Leduc Fire Department had presented me with a stuffed dalmatian fire dog to thank me for being there for them throughout the last few days.

Glenn Chaulk from Syncrude had come over with his crew and presented me with his personal challenge coin - again to thank me for the work I had done feeding these guys while Lynda was on the road.

The only real relief I had from manning that booth after Lynda left on the 5th was a gal named Jasmine Hale, who took over for me for about a half 3/4's of an hour...maybe a bit longer she made sandwiches while I made coffee and straightened up the line and got some supper myself. Other than that the breaks I took where when either Matt, Jody or Jeremy could cover me for bathroom breaks and naps.

Saturday afternoon, Kevin O'Conner and some Peace Officer & Sheriff friends along with employees of A1 Rentals pulled in with the produce and supplies they had brought in. 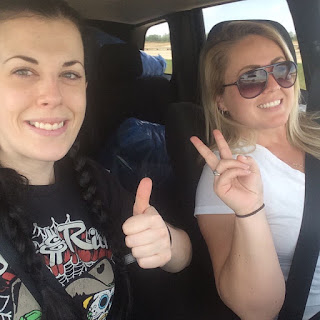 Later on in the evening two ladies, Brittany Cardle (R) and Becca Hess (L) arrived to give me a hand.  I was grateful to have some hands and did my best to show them what needed to be done.  I got some much needed sleep on my cot, snuggled up with my firehouse puppy.

After a hot shower in the morning, I checked on the gals, Becca was manning the booth and Brittany was sleeping in her Jeep.

With everything under control, I decided to let Will sleep in. I headed towards the gymnasium and with Dennis's help got Mother's Day breakfast started. 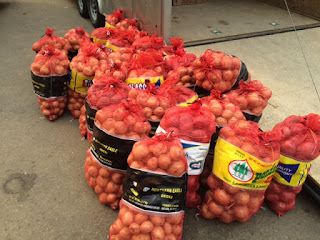 We had all these glorious farm fresh eggs, sausage, potatoes and onions, pancake mix and syrup and I was determined we were going to have a great breakfast.

Dennis sliced potatoes and onions, I was on sausage detail getting as many pre-cooked and on the warmers as possible, and attempting to prevent hash browns from burning when Matt from the Edmonton Fire Department came up and offered a hand.
Now many years ago when I was a young girl, I dated a captain from Fire Hall # 3 in Edmonton, and I came to know that Fire Fighters tend to be pretty damned fine cooks.


I wasn't going to turn down his offer of help as people were already starting to line up and Jody was busy getting coffee ready and putting other breakfast items out on the table in front of the BBQ... 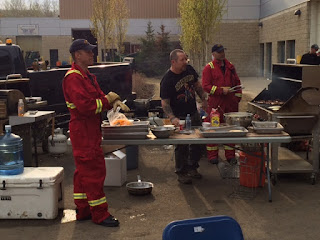 Matt made up the first bowl of pancake batter, I started cracking eggs for scrambled eggs and we took turns manning the sausage and hash browns .  Another Edmonton Fire Fighter, whose name I can not for the life of me remember, came over and offered a hand after teasing Matt.

With the three of us just rocking it on the BBQ's were were keeping up pretty good with the line up of hungry people looking for breakfast!
Jeremy Hall came over and pretty soon, I was pushed out of the breakfast "pit"as we called it, by Matt, Jeremy and the other fire fighter, they said it was because I was a mother too and I should go enjoy breakfast.

How thoughtful - all of the lady fire fighters and police officers were truly appreciative of this very sweet gesture.

At about 15 to 10am we got hit with RAIN! It only lasted about 45 minutes but My word were we all happy to get some...but the scrambling began to move the quick line inside.

It was shortly after this that my time on Mac Island became more than a tad unsettling.

Someone had taken my stuffed dalmatian - the one Jim had given me.

I had left him safely tucked in under my blankets on my cot and a trucker driver had helped me move my cot indoors and when I left my cot, "Lucky" was still there, tucked underneath the covers.  When I went to get him to show him to Jody later, he was gone and no one knew anything.  I was crushed and literally in tears - the gift had meant so much.

If you are blessed enough to be riding today, know that we here in Grande Prairie are finally getting a much needed gentle soaking rain that has lasted so far about 12 hours.  I am not riding today and I am OK with that.

I pray this rain reaches Fort Mac sooner than later.

This post has been updated to correct the name of the gal who gave me a break - her name was Jasmine Hale not Jennifer....Sorry girl!