My Time in Fort McMurray - Part 4

0 #Firefightershugsarethebest, General, My Time in Fort McMurray, TEAM, Volunteers 11:33 AM
A+ A-
Print Email
There are some actions that speak so loudly as to character that you bond to that person who took the action in the most profound of ways.

I hope my penmanship will allow you to understand and feel just how deep these experiences were.

I want to back up to the day that I decided I wanted to get into Fort Mac with supplies.

I made this decision in a snap, no thinking, no second guessing, it became a rock hard resolve in my heart. I was prepared to rent a truck and trailer if I had to that's how hard the resolve was set in me.

When I called Lynda Klouth, my Grande Prairie & Region publisher for the BKC News Bytes and told her what I wanted to do, there was no hesitation in her.

It was simple - she told me "I need to take care of x,y and z and then we can go."
I had already adopted this woman as a sister of my soul and her actions on May 4th, 2016, well, they have forever cemented her position in my heart.

When I talked to my team of two, contractors, and told them I needed them to help and support me in this decision, I got immediate support. Again no second guessing, no comments of don't go - it was "you tell me what you need and I will do it." Suzie and Dave helped me with communications, Suzie did my banking and answered emails for me.  I trust this woman with my life - she has been my right hand for 11 years - she is my ROCK in this business called Belt Drive Betty Media.

My company is so much better for having Dave Trerice handling event communications and postings - he's a trooper and guess what - our pay day is on the 6th of the month and these good folks had to wait for me to get home to do payroll before they could get paid. NO WHINING - NO BITCHING - they were sooo damned patient.

Suzie and her husband were among the first to send me a donation as well!
How's that for loyalty and support?

My "son" Darren Burry with the Iron Order Motorcycle Club was also among the first to donate and in all he donated three times.  His club all stepped up to help him, help me.
I call Darren my son because he is one of those very special young men that moved my soul. He and his wife Em are two of the sweetest people in the world with hearts that are so generous, so genuine, well I fell in love with them the first time I met them and time after time they have proven to me the quality of their souls through their actions.  I want to thank all of the members of the Iron Order who helped Darren help me. One Albertan, Canadian and motorcyclist to another - YOU ROCK.

Then there was Jeremy Hall who called me to help coordinate the effort. He started collecting donations, cleared his schedule so that he'd be able to come and pitch in.  He sent me some money to help with supplies, and then he showed up in Fort Mac with more supplies, the donation from Nicole in Slave Lake and Will Skinner.  He also is the one who called me and asked me if we could take Grovedale Fire Fighter Jessica Kappel with us into Fort Mac.

I watched Jeremy Hall work tirelessly. When he wasn't on the BBQ he was shifting supplies and getting them palletized and sorted, running a water truck or a hoe, hand balming supplies off of the SaveOn Foods truck that came in on Thursday because no one could find a key to the forklift.
I watched him texting for supplies like windshield washer fluid, DEF Fluid for diesel trucks and making calls to rally his network of people.

How about Will Skinner - that man's story can't be told enough.  Will was in a wheelchair just 6 short months ago. Two broken legs, two broken arms and a broken neck thanks to a texting driver who crossed the centre lane and hit him on his motorcycle head on.

Now many know I am crippled up from a car crash, two buggered up feet, knees, low back, 4 compressed disks in my neck etc...and yes, there are a lot of things that I have had to learn to do creatively because I refuse to give in.

But seriously - 6 MONTHS AGO Will Skinner was in a wheelchair.


I witnessed the fatigue and pain in his face. I witnessed a man who no matter what, put a smile on his face and just kept on flipping burgers and dogs, cooking potatoes and SERVING OTHERS.

If that does not SPEAK VOLUMES of the character of the man, I seriously don't know what else could unless of course you also consider that Will slept in his seat in Jeremy's truck.

That's where both men slept. In a 3/4 ton Dodge flat deck pick up.

Then there were the others behind the scenes, the ones that no one in the main stream media wants to give any cudos to; the Hells Angels, the Syndicate, the Nomads and others - they set up a warehouse and supported the Redwater evacuee centre filling it three times and offered me help to garner air masks and filters the minute they heard of the need.

100 sets of air filters were taken to Fire Hall 3 in St Albert - courtesy of the men that so many hate.

When I told them of the need in Wandering River and Boyle - they were already all over Boyle and are now also taking up donations to Wandering River.

WHY? Why would these men that society hates and reviles so badly do that? Because it's what they always do in the time of need - they run by the same code that "bikers", "riders" everywhere follow, they are the ones in our community who taught this code to the rest of us - NEVER EVER LEAVE A BROTHER OR SISTER BEHIND.

They just never get any credit for the good things that they do, so most people only know to fear and hate them.


Then there is the flip side of that coin - the Wetaskiwin crew of the Alberta Sheriffs who ride. In an unofficial capacity, Kevin O'Conner and his crew, Malik, Lacy, Jeff Roblin (A1 Supply) and so many others in their network loaded up supplies donated by the Hutterite colonies in both Wetaskiwin and Camrose. Pine Colony in particular went way above and beyond in the quality and quantity of the things they donated. Fresh eggs, potatoes, onions, baking, home made sausage and so much more. They also had donations from John Deere, Coop and many individuals.

The crew from A1 Supply who donated the truck, trailer and fuel to deliver the supplies - are you starting to get the picture here?  Did you know these good people almost left after a 6 hour drive and a herculean effort to gather stuff without eating?  Their responses were "I feel like we would be taking away from the first responders".  I insisted they have a hot dog or something that driving all those hours without food was as dangerous as working without food. They capitulated finally when I ORDERED them to eat.

Then how about my family on Vancouver Island...Kristy Falconer from the Red Knights and all of the civilians and riders from Vancouver Island that filled a truck and trailer with supplies to go to the evacuee centre warehouse at the Edmonton Airport and then bring me supplies for the first responders like more foot care and pain medications, hydralyte and replenishing drinks. Her husband who drove, BC ferries who gave them free passage...

And one of my buddies named Gloria Swan who paid for masks and filters from money she fundraised for evacuee support.

Kimmy & Tony from Provost who gave my crew a trailer to sleep in and are now letting the guys from Rapid Fire use it for sleeping quarters...

And the small businesses and citizens of GP who donated supplies in those first hours, like a single mom who helped out and an orthopaedic surgeon's office who donated and Full Draw Electric who delivered water and so many others with donations big and small.

Forever in my heart will I be grateful to these businesses and the individual people who stepped up in whatever way they could and I will be loyal with my pocket book to those businesses who helped me and the crew that stepped up to support me.

I have been being criticized by some for what Global put out there in their interview, accusing me of "hogging" the limelight.  I have ZERO control of what they film compared to what hits the air.
They filmed for about an hour and used 2 minutes...Why am I getting cudo's in the media and they aren't?  Ask them, the main stream media

This is the Global Interview I have taken some shots over:
http://globalnews.ca/video/2701197/alberta-motorcyclist-revs-up-to-help-fort-mcmurray 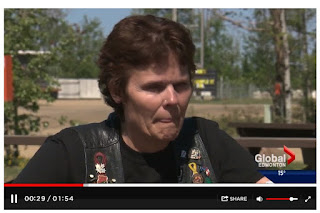 The CBC let me give props to many of the people who helped me:


Here are the links to MY Articles:

I know all too well that I could not have done the work that I myself personally did if I had not had a whole ton of help and support.

For those who think that the people who get interviewed ever have control over what goes to air - think again.

I did MY personal part - making sandwiches and coffee - MOST of the time alone, and for that work I received hugs, a stuffed dalmatian, a challenge coin, a patch and a whole ton of letters and emails thanking me.

BUT I know and acknowledge that I was far from alone in this endeavour and from the very beginning made sure that I gave recognition and thanks to all involved, through posts on Facebook.

And now that I am home and able to write...please know there are many stories yet to come, many more people to thank and I aim to continue doing my best to show people the ARMY that I HAD behind me - every person, every club, every company....

I was the leader, the catalyst - the community answered the call to action - and those in my circle who did what they could deserve to get cudos too.


I WANT THEIR STORIES out there.

I want to leave you all with the most beautiful poem that was shared with me...every fire fighter I read it to cried their hearts out and I hope it gives you pause for thought...

Lisa Rufiange wrote this ...
With a heavy heart, I put pen to paper tonight. What follows is the result. I guess feel free to share if you find any measure of comfort in these words.
Now I lay me down to sleep
Safe in my bed but still I weep
I cry for those not in their homes
And pray for all of their unknowns
The days are long, the fires rage
As we reload our Facebook page
And read of heartache and of pain
While still the beast has not been slain
It took your home, your car, your land
And on uncertainty you stand
Such shakey ground beneath your feet
Your family safe, so bitter-sweet
Now feel the circle around your soul
You're not alone, we'll make you whole
We come together, tried and true
Canada eh? It's what we do
So rise up now and take my hand
I know you're hurt, I'll help you stand
The road ahead will be so long
I'll help you walk, ‪#‎AlbertaStrong‬
May 5, 2016

If you are blessed to be riding today, please remember to ride like everyone around you is blind and cannot see you!