No Fault Insurance in Alberta - Is Legislation is on its way? 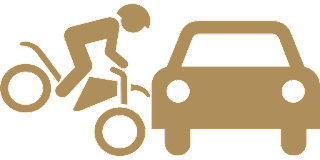 I have been following the insurance situation in BC and Alberta very closely.

As BC gets ready for it’s launch of no fault insurance for May 1st, injury lawyers there are saying the system is not going to be fair for those who are injured. I spoke with one lawyer today who has said that between COVID-19 and the new insurance law, he has scaled back his team by 15-20 positions.

Here are some of the highlights that I pulled out of a Vancouver Sun from a March 2020 article:
“No-fault insurance means people involved in vehicle crashes can no longer sue  for damages — except in cases involving court convictions for offences like negligence, street racing, impaired driving, or in cases of faulty manufacturing, botched repairs and the over-service of alcohol by a business.
Instead, people will receive benefits, payments for medical treatment and compensation directly from ICBC, using amounts set by the province depending on the type of injury.”

“Money for pain and suffering will be eliminated for minor injuries; but for major injuries, cash compensation will be set by categories of benefits with maximum amounts set by ICBC, according to the government. Repairs to vehicles will still be handled by auto adjusters with traditional damage assessments.” “The model virtually eliminates the role of personal injury lawyers, who typically take one-third of the total amount awarded in a settlement and represent a powerful lobby group that continues to fight government reforms. They have argued a no-fault system would leave the most vulnerable victims, with the most catastrophic injuries, alone to face ICBC without legal help.
The Trial Lawyers Association of BC said the change puts the rights of injured and vulnerable British Columbians “at grave risk.”
“Today, this government is doubling down on its failed policy to take away the legal rights of British Columbians while protecting ICBC management who have gotten us into this mess in the first place,” said John Rice, association president.”
(https://vancouversun.com/news/local-news/live-b-c-to-switch-to-no-fault-auto-insurance-trim-rates-20-per-cent-in-2021/)

Injury lawyers in Alberta are equally skeptical about the situation and are anxiously awaiting the legislation they know is coming.
I spoke with one law firm that believes the writing is on the wall and their firm cited the article below as the reason they feel that it is just a matter of time that Albertan’s right to sue will be taken away.

In March of 2020 an internal document was leaked according to the Insurance Business Mag:
An internal document from Alberta’s treasury board and finance department has recommended that the province implement a no-fault auto insurance system. The document, which was obtained by Toronto Star, was compiled by actuary firm J.S. Cheng & Partners and insurance consulting firm Cameron & Associates Insurance Consultants, in consultation with representatives from the province’s treasury board and finance department. The report was conducted as part of a claims and costs study requested in 2018.
The report called for a no-fault auto insurance system, wherein policyholders and their passengers are given compensation by their insurer without proof of fault following an accident. However, a no-fault auto insurance system also means claimants cannot sue for pain and suffering from the auto insurance system. The system effectively replaces the right to seek recovery through the civil justice system for a benefits schedule.
According to the study, the root of Alberta’s insurance cost problems is the rising cost of settling injury claims in the province. The report found that individuals who have suffered at least one of the “top four” injuries – namely, Post Traumatic Stress Disorder, concussions, temporomandibular joint injuries, and whiplash-associated disorder with chronic pain lasting more than six months – are “more likely to be represented by a lawyer,” and that the percentage of claims from individuals with one or more of the injuries has gradually increased from 16% in 2010 to 30% in 2016.
The study also revealed that in 2017, pain and suffering comprised 57% of the money paid for bodily injury claims.
“The main cost driver within bodily injury claims is pain and suffering,” the study noted, adding that Albertans are “increasingly retaining legal representation to negotiate their compensation.” “Our recommendation is that the system can be modified to make it easier for a claimant to make a claim without the time consuming and costly legal process.
(https://www.insurancebusinessmag.com/ca/news/auto-motor/leaked-report-on-albertas-auto-insurance-calls-for-nofault-system-217179.aspx)

The potential model in Alberta would look like this:
Moving to a no-fault system would help alleviate the pressures being put on auto insurance costs in Alberta, and would be a unique model in the Canadian market, according to the head of the province’s brokers.
“We feel this will kick some of the costs out of the system and also make the physical damage repairs happen a little quicker and a little more efficiently,” George Hodgson, CEO of the Insurance Brokers Association of Alberta (IBAA). “It means people get repairs and those sorts of things done to their car quicker, because you don’t have to have a fight between two insurance companies. If you get into an accident, whether it’s your fault or not, your insurance company will work at repairing your car.”
The Alberta solution calls for policyholders to be able to buy-up for tort. “You have to pay extra to have the right to sue outside of the catastrophic injuries,” Hodgson told Canadian Underwriter. “The idea is that it will reduce claims costs while at the same time giving people the right to sue if they feel they need to.”   https://www.canadianunderwriter.ca/brokers/what-a-made-in-alberta-no-fault-auto-insurance-regime-would-look-like-1004175395/
Basically what that means is that if you want to have the right to sue, you have to pay a higher insurance premium.
So as Mr Hodgson, CEO of the Insurance Brokers Association of Alberta said “This particular government seems to move pretty quickly, so I would expect that whatever they do…they’re going to do it as quickly as they can.” And we have been advised that the announcement could be made as soon as June 1st. 2020.  I have written to Minister Toews to confirm or deny that.
The folks at FAIR Alberta Injury Regulations claim that: “The Government of Alberta is reviewing Alberta’s auto insurance system. The government’s insurance reform panel is considering making Alberta’s insurance system a WCB-style, no-fault system. This system won’t save consumers money. It just means increased profits for corporations and fewer protections for Albertans.”
Visit their website at: https://fairalbertainjuryregulations.ca/
I am waiting to hear back from Minister Toews with regards to the province of Alberta’s decision and whether or not it has been made and the framework is being put in place as the rumour mill has suggested. There is a lot of concern in the motorcycle community, I have fielded emails from a number of riders who are concerned  that already vulnerable road users will have to choose their insurances wisely or be left out in the cold when it comes to the support that they will get.
Do we have the right to be concerned? Under the the Saskatchewan Model this is what their basics look like - this is take right from the SGI Website (https://www.sgi.sk.ca/):
GENERAL INFO:
NO FAULT: Saskatchewan residents with No Fault Coverage receive a higher level of defined benefits, regardless of who is responsible for the collision.
TORT:

NO FAULT: Income benefit
90% of net income up to a maximum gross salary of $98,643 annually to age 65, if required.
After 180 days, non-earners including homemakers who continue to be disabled will receive at least minimum wage.
Students will receive up to:
Elementary year: $5,770
Secondary year: $10,722
Post-secondary year: $21,443
Substitute worker or caregiver benefits available up to $47,112 per year.
Those younger than age 65 at the time of the crash and off work for at least 2 years also receive a pension equal to 10% of total income benefit received.

TORT: Income benefit
Up to $23,556 per year.
For a maximum of 2 years unless your injuries prevent you from working at all - if totally disabled, benefit will be paid for life.
Homemakers will also be paid up to $23,556 annually for a maximum of 2 years.
Those who don't qualify for the benefits above, but who are confined to a hospital, bed or wheelchair, will receive $11,752 annually for up to 1 year.

NO FAULT: Death benefit
Surviving spouse - 45% of deceased's net income to a maximum gross salary of $98,643 per year.
Education and training allowance of up to $49,483 for dependent spouses.
Surviving dependant - 5% of the deceased's net income per dependant.
$32,988 for loss of a dependant child.
For deceased with no spouse or dependants, $16,494 payment to each surviving parent and each child older than age 21, to a maximum total of $74,226.
$10,790 funeral benefit.

TORT: Death benefit
Surviving spouse - 45% of deceased's net income to a maximum gross salary of $98,643 per year.
Surviving dependant - 5% of calculated death benefit per dependant.
$14,079 to estate of those with no spouse or dependants.
$7,040 funeral benefit.

The Liabilities in the two types of insurance are very different as well; 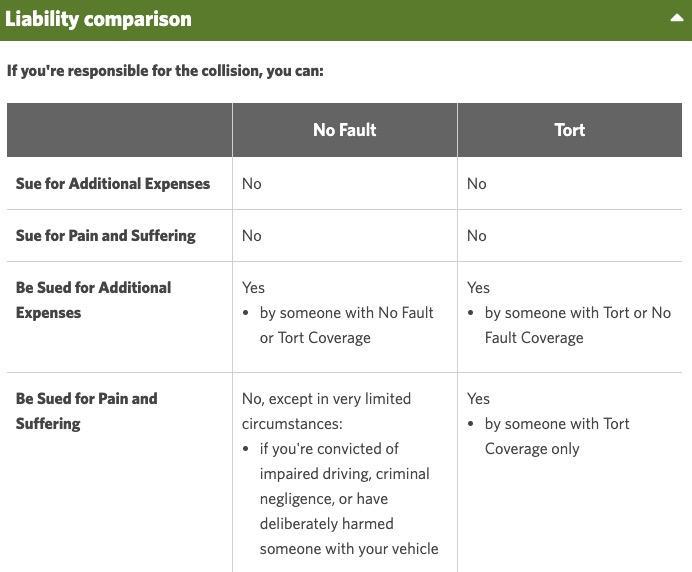 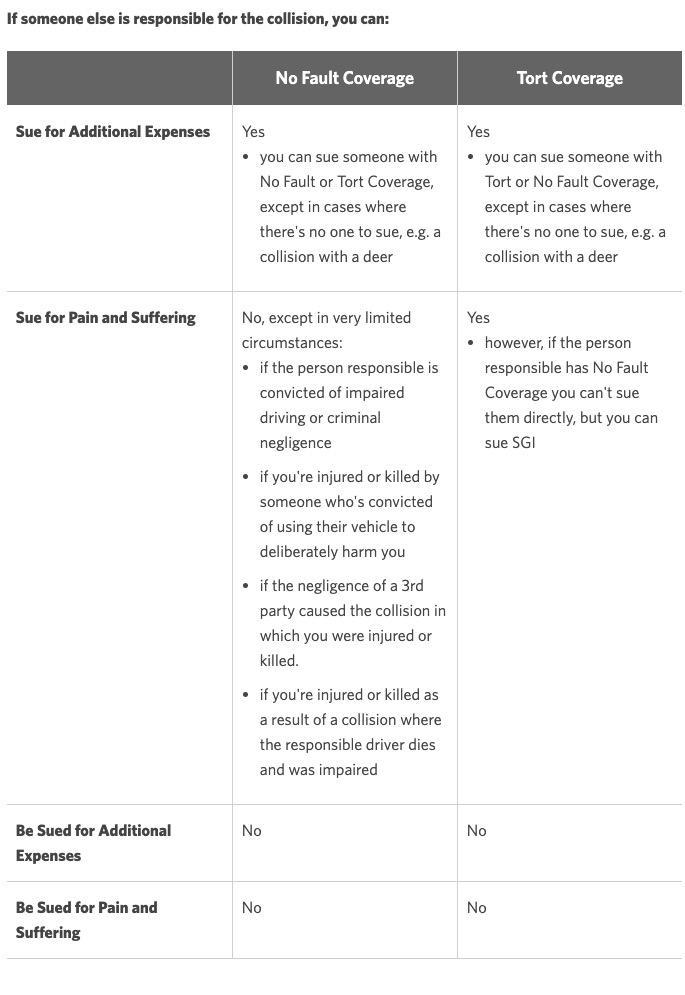 So what does this mean to all of us in Alberta?

From what I am led to understand, higher premiums, and the government decides your level of care, your financial compensations etc.
You gain some compensation in return for your right to sue someone who alters your life. OR you can pay BIG premiums to retain your right to sue.

Basically it will be a WCB style system and if you listen to those on WCB, I’d say we have room to be concerned.
Until we see the legislation we can’t be sure what is going to happen in Alberta.

If what has happened in Manitoba and Saskatchewan are anything to go on, hold on to your pocket books.

With regards to the support for injured riders in our province and in BC, I am waiting to hear back from Dave Munroe at A.I.M. in BC, but according to the rep from OBB their funding from their Injury Lawyer will not be impacted by the change in the insurance law, and so for them it will be business as usual.

When we know what the impact to the Association for Injured Motorcyclists will be we will let you know.

In the meantime please reach out to your MLA in Alberta and push back hard folks or it will be just one more right we lose in this province:
http://www.assembly.ab.ca/net/index.aspx?p=mla_home&rnumber=

While we are hoping there is time yet to change the course of things, the Insurance Brokers Association of Alberta sounds pretty confident that they have won this thing and that we will become a no fault insurance province.