My Time in Fort McMurray - Part 3

0 #Firefightershugsarethebest, Coffee, Fire Teams, My Time in Fort McMurray, Sandwiches, Solidarity, Syncrude 2:36 PM
A+ A-
Print Email
Some of the timings of different shipments and situations get's blurred as the days and nights blended into themselves.  And this story has to kind of jump around a bit - there are just so many stories of people helping out, working together...

On Thursday May 5th, Jeremy Hall and Will Skinner had arrived in the wee hours of the morning.
A lady named Nicole from Slave Lake, had sent up some yoga mats and about 150 Subway sandwiches and cookies with Jeremy. I don't know which of the three things were deemed more welcome by the guys but I do know that nothing went to waste. The cookies were brought out to my quick line and they vanished in the space of a couple of hours.

It was amazing to me to hear the comments about the food we had been handing out and that Jeremy & Will had been cooking.

Those comments were to become even more vocal, more appreciative over the next few days.

There were more and more fire teams moving into the Mac Island base camp.

Everywhere you looked you saw fire teams that represented our province.
Over the course of my time there I saw crews from:
Duchess, Redwater, St. Albert, Calgary, Didsbury, Sundre, Cremona, Fort McKay, Spruce Grove, Stony Plain, Leduc, Leduc County, Tomahawk, High River, Slave Lake, Lesser Slave Lake, Beiseker, Edmonton and on and on - I can't name them all as it became a blur...

All of Alberta it seemed was there - the show of support and solidarity became evident, really fast.

I didn't go in there to be a reporter. I went there to be a volunteer and so I never kept notes, and truly didn't use my camera much at all. I was simply too busy doing the job at hand.

When the camp kitchen was brought in late Thursday night early Friday morning, I thought to myself good, the need will drop down to the supplies people needed in their rigs. I was told that this camp kitchen would be making box lunches and serve hot meals.  Surely the pace would slow down some even though there were now somewhere around 500 - 600 fire fighters and equipment drivers calling this camp their base.

Was I wrong about the workload or the pace slowing down?  OH YEAH...

When I made these guys a sandwich, it had two pieces of texas bread, two slices of cheese, mustard, mayo and tucked in the middle was a generous helping of meat, either ham, chicken or roast beef, sometimes I mixed it up and blended meats. These sandwiches were meant to fill people.

I guess I spoiled these guys and gals a bit, at least when it came to sandwiches and coffee!

A lot of the guys were coming to me and asking me to build sandwiches for their fire teams - they called the camp kitchen the "Appy House". I found out quickly what they meant when a whole rack of these sandwiches were sent over to me from the camp. They had one or two thin slices of meat, a piece of cheese on a sub bun. I ended up opening up a lot of these sandwiches and adding more meat and cheese to them for a lot of the guys and gals.  (Some of the other things the camp made however, like the breakfast sandwiches were awesome and I was told they made very good spaghetti.)

The guys and gals, many of them enjoyed the BBQ'd food too and the BBQ ran until 3 and 4 in the morning every day. That didn't change after the camp kitchen came in, many it seemed preferred BBQ food to sit down meals in the camp kitchen.  I guess in many ways, variety was what was needed - choice.

By about 9 pm Friday, I had run out of the sandwich meat we had brought down.  We had brought 4 cases of the three tray packages from Costco, the Kirkland brand with our first load and Jeremy had brought 2 more cases with his load.  Lynda would be bringing me more in the early hours of Saturday morning so until then, I served the sandwiches the camp kitchen had made, often time taking two or three apart to make one larger, heftier sandwich.

Then there was the coffee - ours was strong and full flavoured, the camp's was much mellower than ours and the guys that came to the quick line were quick to comment on the difference.

The one thing I have learned about fire fighters and truck drivers is that they like their coffee strong, strong enough for a spoon to stand up in it!

We had gotten our own coffee makers on Thursday afternoon and we kept our own urns at the station. We were brewing up Folgers Black Silk Coffee - and when we ran out of that we had gotten Nabob coffee, dark roast - all paid for by donations from the motorcycle community.  Culligan was on site delivering water and when they realized what I was going through, they started giving me my own water supply so Matt and others didn't have to run so far to get me a jug. They dropped me a ton of the 5 gallon jugs over the course of Thursday, Friday, Saturday and Sunday! Thank you Culligan!

The great big 50 cup coffee makers took about 2 and a 1/2 hours to make a pot, so I was making coffee with the little 12 cup pots and keeping my urns filled that way. It was a lot of work, but it meant people didn't often have to wait for coffee and it stayed fresh - I don't think a pot ever made it longer than 20 minutes before it was empty!

Here is a comment that Glenn Chaulk (left) wrote on his Facebook Page about the food and coffee : 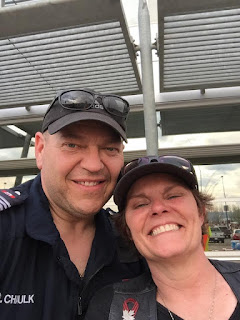 This Angel goes by 'Belt Drive Betty'. When she heard about the state of emergency in our region, she packed up and pulled out of Grand Prairie for our city. She brought with her every possible safety item we could need. She also cooks and provides much needed home cooking. Her coffee could put Tim Horton's out of business and her personality is second to none. All for the low price of a smile! Belt Drive Betty, you are proof that Angels walk amongst us! Thank you from the bottom of my heart for caring.

Glenn is the man who gave me his personal challenge coin on Saturday. He's with Syncrude Fire Department. 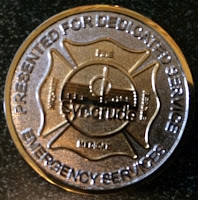 Friday evening, after we ran out of sandwich meat, Matt Coffin manned my station for me and I went and had a cold shower.  Man did it feel good to be clean. My hair was matted and sticky with sweat and ash. It was gross.

It was far easier to keep my outdoor kitchen clean then it was my hair!

I had two portable banquet coolers filled with ice to keep everything fresh.

I had cold bottled water, yogurt and coffee cream at the far end of the station where the coffee urns  and cups were and one on the other end of my station where I made the sandwiches and coffee.
All of the meats, cheese and condiments were kept out of the sun and the heat in that one.

It was a pretty neat little system considering the conditions in which we were working!

Me, well, I finally got a hat given to me on Thursday because no one could find me a pop up tent or a tarp that I could use to stay out of the sun.  I got so hot at one point that I doused myself with water and went and laid on the concrete in the shade until my body temperature went down. It was so bloody hot! On the outskirts of the city the news was saying it was 33 degrees but inside with all of the fires raging around us I am sure the temperature reached 40+ degrees. The air was filled with ash and the burnt needles off of trees. Every time I thought about complaining about the heat I'd think of the teams fighting the beast and shut up.

We still had no gas at the centre so the showers available were all cold and when the hot shower camp arrived Saturday morning, the line ups were LONG! The smiles on the faces of the people coming out of those shacks were priceless and reflected the sense of total contentment that had been found for a few moments.

Little things, things we take for granted every day became big things, bonding things and cause for celebration.