0 #AlbertStrong, #Firefightershugsarethebest, #ILoveFortMac, My Time in Fort McMurray 8:43 AM
A+ A-
Print Email
While helping out in Fort Mac, a number of people came in to volunteer. Most of these people came in after the first 48 hours of me being there so we had limited opportunity to get to know each other.

Now Justin and I only met a few times up there, we were both really busy doing the tasks we had taken on. I knew that he was living up here in GP and I reached out to him and asked him to share his story with all of you.

In his own words, here is Justin Sickkamore's Time in Fort Mac:

This whole surreal relief effort that I was fortunate enough to be a part of all began for me with a phone conversation with my good buddy and mechanic at Bulldog, Sam Stuart. From this conversation began for us an outpouring of support that was monumental to say the least.

Sam and his pal Scott White, a mechanic at Ferus, got us rolling with a 20' enclosed trailer from Ferus and a 25' flat deck. From there Blaine Swanson, Kyle Cadman, Darrell Carek and Kris Klapstein from Bulldog Energy Group offered me full support, gave me unlimited access to fuel cards and offered me as much time off as I needed.

We made contact with the lovely Jodi Dick at Pat's Auto here in Grande Prairie, she agreed for us to stage our trailers at her facility on the main drag up north and also to manage the donations for us and get the trailers loaded up, freeing us up for other things. We also started taking donations at Bulldog's shop, which we shared with Jeff Bateman and Tired Iron Mechanical just outside of town. The outpouring was unimaginable, Grant Production Testing GP showed up with a full pallet of necessities, Cole with 10K Rentals here in GP, same thing, and on and on.. By the end of the day we had 4 trailer loads ready to roll and roll they did. By 8 pm we were pulling out of GP and Edmonton bound to hit the relief center to see if they needed anything or if we could transport for them, unfortunately we had no luck in Edmonton as we arrived late, we carried on, Sam and Scott stopped in Fort Saskatchewan for a sleep. But I couldn't I had to carry on, by daybreak I was rolling into Conklin. 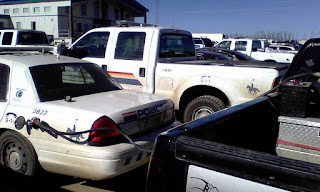 It was chaos, RCMP just arriving, fires raging, confusion, virtually no supplies it was unreal. I was talking a gentleman who didn't even manage to grab shoes in the mayhem of the evacuation. He got the Globes off of my feet. I had managed to think ahead a little and grab my PS3 and some games from my room for stranded kids, and the smiles on the faces of the kids that I gave it to in Conklin were priceless! Also I feel the need to mention all the amazing and hard work done by those working at Conklin Lodge sorry that I don't remember your names. But my time was up in Conklin, so after filling up about 10 RCMP cruisers I had to keep going, someone told me there was a small town named Janvier up the 881 so off I went. When I arrived in Janvier I was informed they were under a boil water order and were running out of drinking water, luckily I had 50+ cases on my trailer, which I dropped off. They were so grateful their hugs and smiles reinforced in my mind why I needed to be here.

Then I finally met "the beast" I got cut off at Anzac on Hwy 881 and wheeled around by RCMP (who gratefully accepted some granola bars etc.. I had to pin it (and I mean pin it, my poor GMC) to the K-Road cut across and got to Wandering River. The wonderful volunteers who were already setting up in Wandering River picked thru my stuff took what they needed and sent me on my way. Hit a few stores restocked my trailer with what money I had left grabbed 28 cartons of smokes for firefighters and off I went.

I arrived at the barricade on Hwy 63 at Hwy 881 and was once again face to face with the monster, I dropped my trailer on the southbound side of the 63 and opened the doors and set up a makeshift display for evacuees to stop and grab what they needed as they fled their beloved homes. I spent the night in my truck on 63 met a few stragglers who grabbed supplies. Two that really stick out were a father and his young boy, stopped and grabbed tooth brushes and simple things and that little boy hugged me so tight, just went to show the chaos and desperation for the simple things that we take for granted daily. The fire in Anzac got bad, bombers dropping water right beside me on the highway,
that's when Ezra Mackenzie showed up from Bulldog with about 1000lbs of burgers, pork chops etc for Firefighters. That was my in, that's how I got security clearance and was put in contact with an amazing man by the name of Jeremy Hall. Jeremy was our (the volunteers') leader in this time of chaos, he is who I turned to with questions up there and who held the behind the scenes together for us volunteers. That man gets huge, huge respect from me always, he's someone who could always call on me in life or death situation and I'd be there no questions. So I'm in and as I drive towards Mac Island it resembles what I would imagine an apocalypse looking like, abandoned vehicles everywhere scattered on the roads, a city bus jammed in the median just surreal. Then I arrived at Mac Island where my new family for the next week immediately surrounded me. With 28 cartons of smokes on board, I started making friends fast lol (the 28 cartons I gave away every last pack in 6 hours flat, just an example of how desperate conditions were at first)

I immediately turned to Facebook, posting my phone # and the fact that I was at Mac Island and that we needed supplies. The public response was tremendous; my phone went off the hook. Then I "called out" Tim Horton’s asking why we didn't have a mobile station for these heroes. Within three hours I received a call from this wonderful little Nova Scotian lady Natalie Stephen who just so happens to run a Timmy's mobile Van out of Edmonton. That determined angel on earth jumped through hoops and made arrangements to get up there and do you know what? That little soldier is still up there today I just talked to her. Kudos to you Natalie! Then I met Belt Drive Betty, I immediately recognized her passion and huge heart, I also met Jody Hudek, an amazing soul who after losing it all stayed and worked round the clock with me feeding volunteers, Will Skinner from GP, the cook who actually had skills! LOL.

Then I got a message from a man in Red Deer, a Mike Veroba, owner of Renegade Oilfield Service, who informed me that with the help of Gasoline Alley Harley Davidson had tirelessly filled 4 that's right four 53' trailers full of supplies. Mike and I collaborated and organized where to send needed supplies. Mike even managed to get $2300 worth of chew for the firefighters who had been looking for some for days. 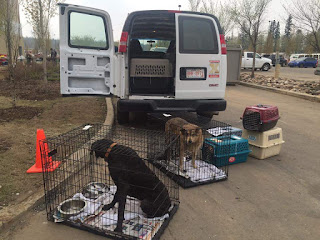 Then I fired up the BBQ's that the community center had on site and we started getting some warm food out to the heroes on the ground. Will and I ran that grill day and night for days, I told the boys no matter 4:30pm or 4:30am I'm not a cook but I can grill some burgers and there will be hot ones waiting if anyone wants one. I wasn't aloud to help with the fires (I tried lol) it's the least I could do. I was putting out anywhere from 300-500 burgers a night from only 11pm to 4am. But seeing the smiles on those tired, wet and hungry heroes firefighters and RCMP alike made it all worthwhile. A few days later, On Fire Barbeques in Beaverlodge sent up a beaut of a grill capable of doing roughly 100 burgers at a time making my life and that of Will’s sooo much easier, thanks guys. I jumped in the forklift and started offloading trucks, ran around organizing supplies and finding out what people needed and communicating that to the outside world through Facebook. 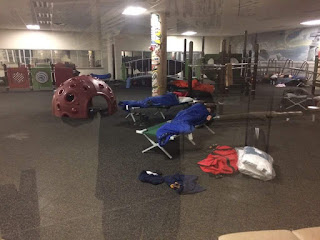 Then on Sunday, Mother's Day, I had the pleasure of meeting this gem of a woman from GP named Jessy Kappel, a true hero, away from her beautiful daughter on mother's day fighting to save the city for strangers, all with this sometimes forced smile on her face and determination in her eyes, going hard 20+ hours a day. I have mad respect for that woman, what a soldier.

Then came the day we got the word we were getting the boot from Mac Island, I was so disappointed, I'd still be there if they'd let me, but anyway, we loaded up roughly 1500lbs of dog food that was left over at Mac Island and headed out of the city a little over a week after we got in. We hit two "RV cities" south of the city, and dropped off probably about 300lbs of food to hungry dogs and a bunch of meat and odds and ends for the humans too. The rest we delivered to Lac La Biche and even given my 1:45am arrival in Lac La Biche we were graciously welcomed by the Lac La Biche Humane Society who even helped me offload the truck! I think I finally saw a bed for the first time in over a week in Spruce Grove at about 4:30am. Crashed and got back up to meet Ben Sauve and Tania Marowchuk, two evacuees I had been in contact with on Facebook and had coffee and a chat, their positive attitude amongst all the chaos was really uplifting.

Finally back to GP, day 13 I think, I lost track, I met up with my best friend's sister Tiffany Reid, her man Adam Nicholson and their two wonderful kids Madox and Lola. Lovely Miss Lola's bike had been stolen from their front lawn their first night in GP (way to go GP) and I saw Tiffany's post on Facebook looking for a bike for her. I didn't have much left but I really wanted to help them. So I scrounged up my last $150 and off to WalMart we went, and with the help of the wonderful assistant manager Rhonda at WalMart GP who put the balance of the bike I couldn't afford on her personal debit card we got Lola her bike!

Now I'm settled back in GP with Bulldog, life as normal per say, but it doesn't feel right.

Anyways in closing, if I were ever heaven forbid to find myself in the predicament that residents of Fort McMurray are in I would pray that someone out there would do the things I've done for me. As a human being the least I can do is be willing to do what I would hope others would do for me. I'd do it again in a heartbeat and would drive to Fort Mac tomorrow if they'd let me in. Last but not least stay #albertastrong


I hope you enjoyed Justin's story and his photo album.