On September 29th, I along with 31 others became Chevaliers in the Order of St. George.
The Investiture Ceremony took place at Kingston Ontario's St. George's Cathedral.


How I came to be invested into the Order

I was sponsored into the order by Allan Plett who is the Ops Manager for 3 C.A.V. (Canadian Army  Veterans Motorcycle Units). I have been an honorary member since 6 months after C.A.V. started about 16 years ago. As a member of the media I don't officially pay dues with any riding club.

I do however wear their crest proudly as a supporter member.

Both my mom and dad served and I was born on the Armed Forces Base Churchill Manitoba.
My now deceased brother, Jim was born in Downsview Ontario and had been a cadet who got his glider pilots wings.

I myself applied to join the military, I took my medical, wrote my exams and waited for two years.
There was a hiring moratorium on at the time and when I got my call to basic training the day I was getting ready to leave for California, I chose California. I ended up getting to work on jet engines and learning anyway.

I admire our military. The Canadian Military is filled with a lot of very noble people, doing work that most of us don't have the courage or the will to do. Most of these people answer a call to service that starts in their soul.

It has its ugly side, but that happens in every organization.  Look around you and you'll know what I mean. Religious leaders doing heinous things, police officers sometimes not much better, doctors and nurses who violate trust...and they make it very hard for those who answer those callings that are pure of heart and truly pushing forward good things.  It happens in the soccer mom community, the football dad community, it happens in Boy Scouts and Girl Scouts, it's the human condition.

I lived first hand the devestating results of military spouses, one with what we now call PTSD from physical and mental abuse and trauma as a kid, and the other who was a pugalist, and also suffered from trauma in his youth.

Unlike the veterans and Silver Cross families and cadets that I work to support today, I am a civilian and therefore as a rape, physical and mental abuse trauma survivor, supports are not as accessible. At least there are supports available to our veterans and their families as a group, and even if not perfect they sure are evolving in a hurry.  As a civilian, you fall through the cracks and when you live in a city like Grande Prairie, where doctors are here in order to qualify for citizenship, and you lose your doctor when they move to Calgary or Edmonton, it can take as many as 15 years to get another one.
Just ask me. I know our city is working on it, but it's tough to get skilled doctors to live in this cold but beautiful place.

Dealing with the challenges, the triggers, on your own can be difficult, but working with veterans, talking to them, becoming friends with them, you learn from them various coping methods and you grow, evolve.  Homeless veterans and people like me, well we have something in common, we are all but unidentifiable for outreach to get help. We are virtually faceless.  But together we help each other.

Sorry for being a little long winded; I guess I could have just said I identify with them, but you wouldn't have any understanding as to why.

When I was sponsored into the Order of St. George, I had to provide my CV, outline the charitable work I have done, have that vetted and then my application had to go to the board for approval.
It was an interesting process that took the better part of a year.


Getting Ready for the Investiture 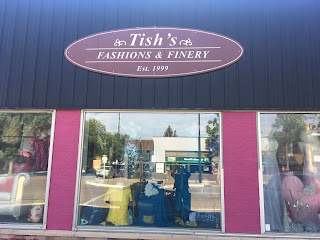 I needed a gown for the gala after the ceremony and was talking to my friend Kim Newberry, a
Camrose Alberta Cadet mom whose cadet corps I have sponsored for various things, about this dilemma, I had no idea where to even start and wanted some advice.

Kim recommended a place called Tish's Fashion and Finery.
I was told this was a woman's fashion boutique with a selection that would blow your mind and she got me a fitting appointment for the morning of the Run to the Hills Rally in Two Hills since I'd be in the area already! 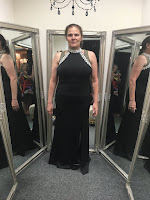 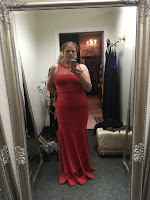 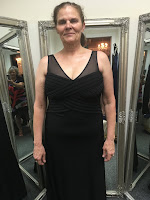 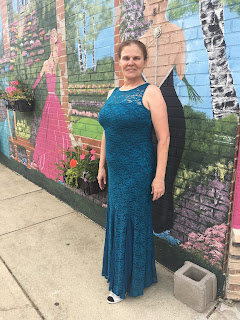 The sales lady I dealt with was named Donna, and she was the most patient, kind hearted person inthe world.  I haven't worn a dress other than to the odd Christmas party or funerals in the last 25 years since I quit modelling for part of my living. I had NO clue what would look good on me. She let me try on 7 or 8 dresses, all were beautiful but....

She served me coffee, chatted with me about the event and made sure to help me select dresses that would wow and while all of them were spectacular....when friends and family saw me in the dress that I ultimately chose, their comments had me blushing.

And then you could have knocked me over with a feather when I was told the dress was a gift from Tish for the volunteer work I do for the cadets and veterans.

Apparently this is something Tish does frequently. She picks out someone that she sees needs/deserves to feel beautiful and she helps make that happen.

So ladies, if you find yourself needing something to make you feel fabulous, may I recommend a dress from Tish's Fashion and Finery in Camrose Alberta!

Suffice it to say, that not only did I feel special, I felt beautiful.

After the gown, I needed to go purchase some dress clothes as we postulants would have 3 functions to get through before the gala and the gown! 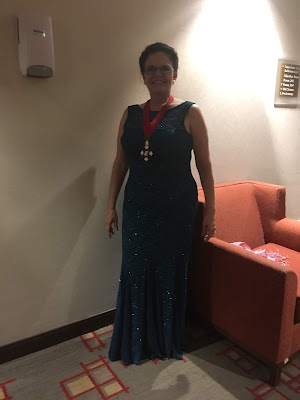 It was a whirlwind time filled with learning about the Order in Canada which was brought here in 2003 by the Grande Master Gareth Green. The Order of St George has been around since 1326.

When it started here in Canada it was largely ceremonial but now the Order of St George in Canada is a working Knighthood that supports our military, veterans, cadets and many programs that support our youth.

To learn more about the Order of St. George and the Foundation visit: www.orderstgeorge.ca

Next time, photos and videos from the meet n greet, the ceremony, dinner and my thoughts on being a part of this organization.

Until then, if you are blessed to be riding today, please remember to ride like everyone around you is blind and cannot see you,