Riding Clubs & Associations - the DOWN SIDE to being identifiable

4 Alberta, FSMA, Law Suit, Motorcycle Community, Motorcycle Noise 11:08 AM
A+ A-
Print Email
So you want to be in a riding club or motorcycle association....

Do you know the risks of being in an identifiable group like motorcycle riding club?

HOW ABOUT BEING SUED FOR BEING NOISY?

Does your riding club or association have insurance?
Can you afford a lawyer?  Will your insurance provide one?
Do you have a Defence Fund? Are you prepared for an increase in your insurance, assuming you have some.

We have well and truly become Americanized; where everyone sues everyone in order to force their point of view.

The courts will take two weeks to decide if this case will move ahead, however, whether it moves forward or not, there is a certain amount of damage already done to the FSMA over this and that is that their association's insurance premiums will most likely be increased and that will cause the group untold financial discomfort and could put their Toy Run and Cancer Run at jeopardy. In fact, this could reverberate down to every non profit and their insurance.

The dispute stems from the noise of motorcycles, and according to news articles, the man at the centre of the dispute, Richard Charles Jones who is 70 years of age, says he has been battling for 15 years over the noise generated by the FSMA's Toy Run. He's been a resident of Fort Saskatchewan Alberta for 17 years according to the referenced article. The FSMA has been around since the 1970's.

He claims: "“I’m a reasonably patient man but 15 years has just put me over the top, especially with that Toy Run parade, which is nothing but a hoax,” Jones said, adding he believes the Fort Saskatchewan Motorcycle Association misrepresents themselves and is a “clandestine” organization.

“This is a hoax for a bunch of bikers to get together and make a lot of noise. That’s all it’s ever been and it will never be anything else,” the plaintiff remarked." End Quote

I have attempted to find out which Quebec community won an 8 million dollar lawsuit that Mr. Jones references in his interview. I will be working very hard to find that come Monday as of the time of wiring I have had no success finding that information.

There is a partial solution to the motorcycle noise problem, one that would eliminate probably 70% or better of the noise issues and complaints and that is for motorcycle dealers to quit selling aftermarket pipes that are meant for off road use only and putting them on for highway use motorcycles.

If it were illegal to sell them and install them and dealers were fined - we'd resolve a lot of the issue.

Yes, there would still be the guys who would modify their exhaust on their own, but with the lack of knowledge most people have of computer controlled fuel systems etc., they would be fewer and farther between. Once their motorcycle started running like crap they'd be repairing their exhaust. 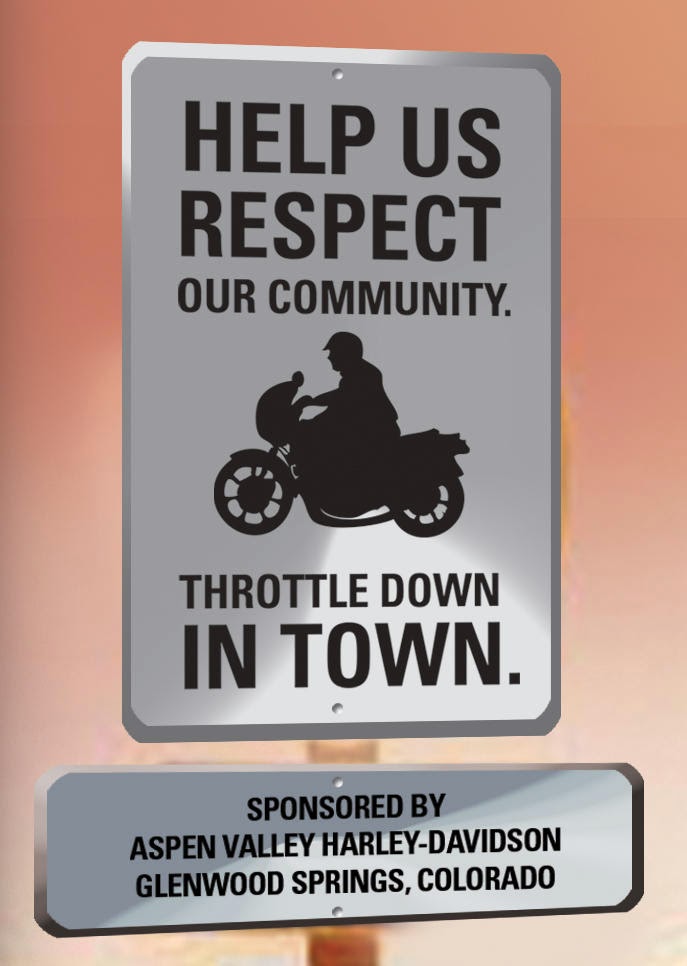 Another part of the solution, is for riders who are respectful, who don't want to be targeted or sued all the time to out those who are not considerate or respectful. That could be done a number of ways.  I'll leave it to your imagination as to how you could help keep the disrespectful in your community in line a little more.

Another thing that could be done is a signage program asking visitors and local riders to respect one's community by throttling down in residential, hospital, seniors home and school zones.  Reminders NEVER HURT.

Or we could all turn to electric motorcycles.
Then no one could bitch about us or our noise, because we wouldn't make much noise.

The bad assed image, the role playing so many who get on a motorcycle partake in; that's our problem!

The man in this lawsuit, Richard Jones, has had an offer of financial support for his court costs from the group One Square Inch of Silence, a Seattle noise-free advocate group for Washington’s Olympic National Park according to the article referenced above.  I will be making phone calls to find out if that is in fact true.

Alberta has become the centre of the fight against motorcycle noise pollution in Canada.
The eyes of noise pollution activists are going to be on this suit as it has been reported throughout the media all across North America.

This man, Richard Jones, has set a dangerous precedent and whether he is successful or not, others who follow will learn and change tactics and the try it again - have no doubt about that.

A non-profit motorcycle association, one that has been around since the 70's is facing a legal battle they cannot afford to fight and why? Because they are identifiable; visible.

The Fort Saskatchewan Motorcycle Association needs help. If for no other reason than the ensuing rise in their insurance premiums, but be aware, they won't be alone. Every riding club and  association's risk factor for being sued just went up and that will reflect in increased premiums most likely.

I want to make one thing abundantly clear to everyone who reads this - this issue of noise is NOT going to go away.

So folks, all of you who are in a social riding club, do you have insurance?
Are you prepared to fight a legal battle if need be?
Do you have a Legal Fund?

If not, you'd best get your affairs in order, because this IS going to become the norm.

I have been PREACHING for years that we needed to self police things, that we needed a riders rights organization, but as usual deaf ears heard none of those dire warnings.

Now everyone who rides with a motorcycle riding club, association etc. could find themselves being sued, even if they aren't the offenders. You are identifiable because you wear a patch, you are at risk while the person with no patch and rides in an obnoxious fashion is not so easily identified.

Well done complacent riders of motorcycles - well done. Its time to pull your heads out of the sand and quit thinking it won't affect you or that it doesn't affect you because it does.  It affects our events, our lifestyle and our freedoms.

Now we all get to pay the price for the inconsiderate few.

M.O.D.E.L. (Motorcyclists Opposed to Discriminatory Exhaust Legislation) has not gotten the support from riders it needs to get rid of the discrimination aspect of the Edmonton Motorcycle Only Noise Bylaw.

Now this situation in Fort Saskatchewan - I guess it is truly time to look at electric motorcycles and how they will allow us to stay riding and on the right side of our neighbours because yeah - we aren't smart enough collectively to do the right thing - PIPE DOWN IN URBAN AREAS and to out those who are destroying it for the rest of us.

This is going to be one expensive lawsuit to fight, and as a non profit they, the FSMA, do NOT have the funds to protect themselves not for the legal fees or the increase in insurance premiums they will undoubtably face.

Our newspaper and web site will be offering all of the support we can to them, but none of that is going to mean anything if people don't reach into their wallets.

Perhaps, just perhaps this lawsuit will be the impetus to a uniting of voices and people to form a Riders Rights Organization. One that can help defend and protect the riding community. I keep hoping, praying....

I hope that if you are riding today you will be respectful in urban areas and please ride like everyone around you is blind and cannot see you.