Motorcycling in Canada - A Ride Through our History - Part 11

0 A Ride Through Our History, Art Robbins, Michele Mercier, Suzuki Motorcycles 4:12 PM
A+ A-
Print Email
Suzuki entered the Canadian market in 1973 alongside Yamaha and Kawasaki. Having started producing motorcycles in 1952, it only took them 10 short years to break onto the racing circuits in a meaningful way.

Suzuki built its first motorized bicycle, the ’Power Free’, it was designed to be inexpensive and easy to maintain, it used a 36cc, two-stroke engine clipped to the frame of a conventional bicycle.


During the 50's and into the early 60's Suzuki produced a motorcycle called the Colleda which was sold primarily in Japan until the late 50's.

Suzuki changed the face of motorcycling and motorcycle racing in a very meaningful way.

Suzuki was the first motorcycle manufacturer to utilize a design house to design a motorcycle.
The GSX1100S Katana was that bike  designed by the Target Design Team.

When they introduced the Katana in 1980/1, they made people stand up and pay attention, the aggressive in your face styling and innate handling of the machine made people realize that Suzuki motorcycles were going to be contenders on the track and on the road.

In 1985, they introduced GSX-R750 - the Gixxer - a motorcycle that radically changed the face of motorcycling and racing.  This machine (and the Katana), made it affordable for independent racers to be competitive.

In 1996, Suzuki re-invented GSX-R750. This was the turning-point model of the GSX R series.
Equipped with a twin-spar frame instead of the double cradle frame, a shortened wheelbase that generated smooth drivability and a dry weight of  only 179kg, this machine .

Suzuki kept innovating, wanting their machines to stand head and shoulder above the rest.
And they did so in 1999 with the unveiling of the GSX1300R Hayabusa. The 1298cc liquid-cooled DOHC in-line 4-cylinder engine that powered the Hayabusa  was the epitome of world class engineering. Aerodynamic in design with the superb balance of the engine performance coupled with impressive handling and a wide speed range on the road made the Hyabusa an instant success.

Suzuki had become a racers delight.
But the innovations did not stop in 1999. Oh no, it seems they were just gearing up.

The GSX-R1000 became the newest addition to the GSX-R family in 2001 and it had the same impact as the GSX-R750 did in 1985. The rule book on performance, weight, handling and styling were once again re written by Suzuki. Dominating race tracks and awards ceremonies around the world, the Gixxer became a racer and a fan favourite.

2008 was another banner year for Suzuki, a company that never rests on its laurels. A naked muscle bike with attitude, the Suzuki B-King, which had first been shown as a concept model in 2001 joined the Suzuki stables.

They also launched the worlds first production fuel injected motocross bike - the RM-Z450 in 2008 along with the GSX-R600 and 750 models. But they weren't done yet!
The motorcycle many called "the thinking mans bike" was introduced, the 2nd generation Hayabusa 1300.

The V-Strom 650 has been the best-selling model in its class since it was first introduced in 2004.
In 2012, the revamped V-Strom 650 saw improvements its performance and comfort. The 645cc V-Twin engine had improved low-to-mid rpm performance that was matched by enhanced fuel economy and environmental performance.

When it comes to the race track, Suzuki has produced some impressive results.

Art "The Dart" Robbins from Scarborough Ontario was considered to be one of the most natural of all riders in Canadian Road Racing history. He was also sadly plagued by many personal problems which eventually caused his demise as a racer.

Colin Fraser, then organizer of the Parts Canada Superbike Series, commented that Art Robbins was "the greatest wasted talent in the history of Canadian Motorcycle Racing".


The machine that caused the meteor like rise of Robbins was the 1979 GS1000.

Winning his first major pro race in 1982, Art Robbins went on to win many races.

In 1983 he won the Canadian Superbike Championship onboard the GS1000.

He won the championship a second time onboard a Yamaha TZ750.

He and Michele Mercier battled head to head many a time.  Michele, a factory Suzuki rider won the Championship in 86 & 87 on the GSX-R750, he too ended up moving to Yamaha, winning the Pro Superbike Championship 1990 on the Yamaha OWO1, the last championship in this class of his career.

The Suzuki machines, the Katana and the Gixxer in particular, made it affordable for many independent riders to become real competitors in the sport of road racing.

In the final article of this series we will explore the Kawasaki motorcycle. 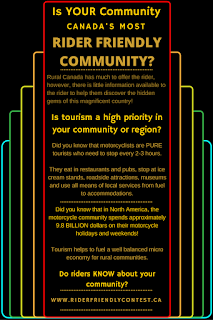 No other manufacturer in Canadian Racing has dominated the track the way Kawasaki has.

I hope you have enjoyed this segment of the "Motorcycling in Canada, A Ride Through Our History" articles.


Research for this article: