0 Fort Mac Wildfire, Fort McMurray, Highway 63, Larry Pegg, Mental Health, PTSD, SuicidePrevention, Wildfire 11:49 AM
A+ A-
Print Email
The Fort McMurray wildfire may very go down as the biggest story of 2016.  It was Canada’s largest-ever natural disaster.  Eighty-eight thousand people were evacuated down highway 63 as flames erupted around them.

Fort McMurray still needs help to rebuild, and to aid in a meaningful and financial way, Larry Pegg has been inspired to write a song and put together a touching music video about this ‘coming together’ in such a time of need. 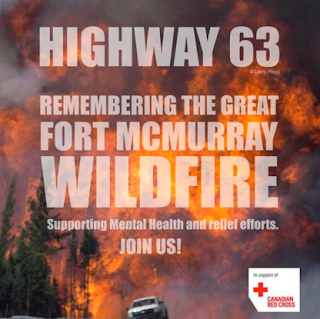 "...it looks like hell on the CBC..." is a line from Larry Pegg Music’s moving song Highway 63. The song is supporting the wildfire relief efforts and creating awareness for #MentalHealth, #PTSD and #SuicidePrevention, all key issues that will affect those affected by this dramatic and tragic event. As Larry has suffered unimaginable loss himself,  he was able to tap into that and thus create his beautiful rendition of this tragedy.

Larry would like to recognize and thank Michel Chamberland who captured the images seen on the video, and to the CBC for their tireless coverage and their interview of Captain Adam Bugden (as you'll see on the video), Chief Darby Allen and so many others. Thanks as well to the Montana Smoke Jumpers who provided their fearless footage in solidarity with their fellow firefighters, both brothers and sisters.  All their efforts and hard work that are seen in the images of the video drove the rhythm, the melody, the lyrics and the message. 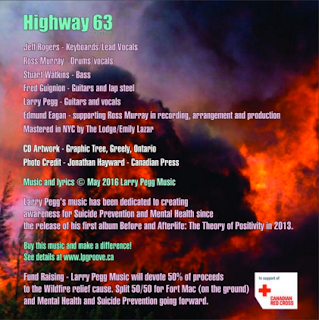 You can download Highway 63 here. Click 'Your price' in the player to download and Larry will devote 100% of download proceeds (set your own price, $2.00 minimum CAD) to the wildfire relief cause and mental health and suicide prevention going forward.  The Red Cross is doing incredible work in supporting those that are in need.

Highway 63 features Ottawa-based Jeff Rogers (keyboards/vocals), Ross Murray (drums/vocals), Stuart Watkins (bass), Fred Guignion (guitars and lap steel), Larry Pegg (guitars and vocals) and Edmund Eagan (supporting Ross Murray in production and arrangement). Jeff sings the lead, and he kicks it out of the park with his great voice and delivery. Mastered by the iconic Emily Lazar at The Lodge in New York City.

We feel this song is a strong contender for ‘Canada’s song of the year’ and we are asking you to download, share, and share some more! 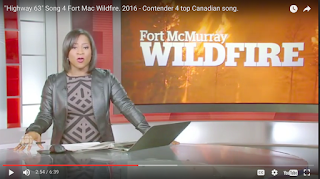