0 2016 Season Winner, Canada's MOST Rider Friendly Community, Port Alberni, Port Alberni Toy Run 9:59 AM
A+ A-
Print Email
My time in Port Alberni was rewarding.  After partaking in a toy ride that saw well over 1,500 bikes come out (the official count was under 1,300), we pulled into the parking lot at the Glenwood Centre, everyone dropping of their toy and then off to buy tee shirts, get an adult beverage and a seat to watch the rodeo.

The games were run with a precision I have not seen in years! Everyone in the stands were hooting and cheering the competitors on.

Man does this toy run get crowd participation happening! There was no shortage on competition, these folks love their rodeo!

During the Toy Run I was blown away by the number of signs thanking the riders for supporting their community. During the event that followed I was blown away by how much the community at large participates in what the committee hosts.  The number of families and children that were present just made you smile - this is what a toy run should be.  Here is one of the the Facebook Live videos I did that day: 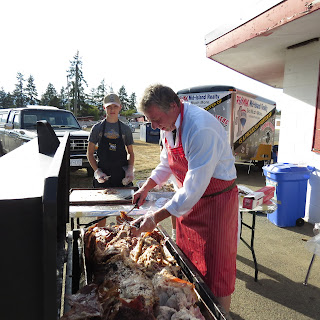 The guy that was cooking up the pig, a 200 pounder, had his son and a friend helping debone the meat and get it ready for the midnight luncheon at the toy run dance.

He was handing out cracking like it was crack and people were gobbling it up - me included!
He was also playing in the band Big Daddy for the dance!

After the rodeo, I went back to the hotel for a bit to change footwear and ended up having wonderful conversations with a number of my Island friends.

At 9:00PM I headed back over to the Glenwood Centre and the dance. They had two bands playing and both were really freaking good! 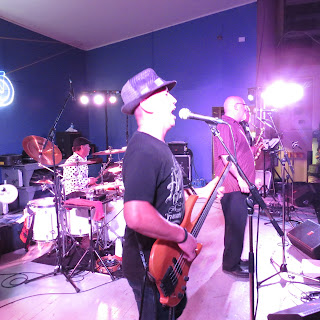 I was shocked to see how many people were already there and dancing - the dance had only been on for a half hour or so!

By the time I got done interviews the hall and the beer gardens were packed. Everyone was dancing, having fun.  The Shuttle bus was busy making sure no one risked drinking and driving.

There was one other rather interesting observation that I made.... all weekend long did I see a police car or an officer other than for one walk through for the liquor permit.

This event is attended by people who have great respect, there was not one harsh word, no one disagreeing or fighting, and I guess that means the police feel good about the precautions the Toy Run Committee takes and what transpires with the attendees! 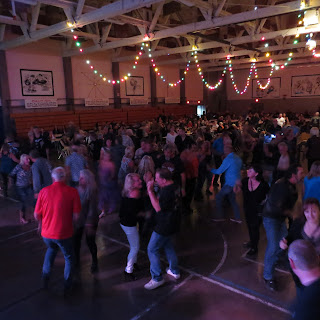 Port Alberni British Columbia on Vancouver Island is a must do for any rider, but if you love Toy Runs, the Port Alberni Toy Run is also a MUST do!  You need to see for yourself why Port Alberni IS Canada's MOST Rider Friendly Community!

To see the interviews and video from the Toy Run, tune into Ride Like a Local on EastLink TV or YouTube in December!

If you are blessed enough to be riding today,
please ride like everyone around you is blind and cannot see you.