Run to the Hills Memorial Rally - All the fun you can have with crayons and beer! 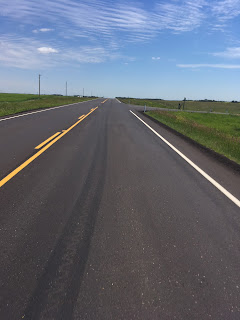 I had stayed in Camrose the night before in order to be fitted for a gown for a ceremony that I will be part of in September.
Ladies, if you are in need of a formal gown Tish's Fashions & Finery in Camrose is the place to go! Wow what incredible service - but more on that another day, I promise.

Back to Two Hills and my reason for being there, the Run to the Hills Memorial Bike Rally....

In Beaver County, just before the little community called Viking, there was BRAND NEW black top, about 10 K worth, not a whisper of wind and amazing blue skies.
What a happy, happy place to be! 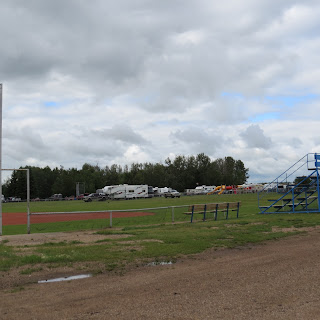 I pulled in to the grocery store in Two Hills to meet up with my girlfriend Laurie from Fort Saskatchewan. She had picked up the order of Scavenger Hunt Maps that Staples had printed for us.  All 20,000 of them, her poor little Ford Thunderbird sports car!

Well, we set about dropping off maps to lighten her load and then went to the Two Hills Inn for some Chinese for lunch. Lemon Chicken and Special Fried Rice! As usual the portions were so huge that Laurie took enough leftovers home for her and her hubby to have for super!

Although the Two Hills Inn is an old building, Julie and her hubby, Chow, have renovated all of the rooms and they are really decent rooms, with individual air conditioners, bathrooms, albeit small ones in each room, comfy beds and a really good price point. 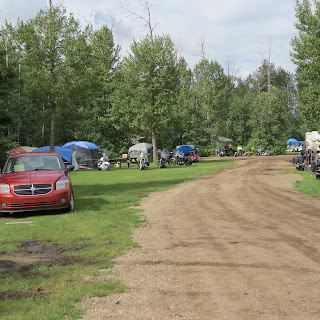 After our scarf, we headed down to the rally site at Galeta Park and dropped off a ton of the maps in the beer gardens so that the various advertisers could pick up their share of the maps for distribution.

There had been vicious rain the night before but low and behold, there were motorhomes, toy haulers and tents everywhere. Easily 300+ people were already here!

Laurie and I headed over to the Junction Inn which is where I would be staying this year for the rally.

I had my favourite room, #107 on the ground floor.

Laurie had to head back to Fort Saskatchewan so we said our good byes and I proceeded to get settled in my room when all of a sudden the thunder hit and a few minutes later, so did the hail. That was followed by 2-3 minutes of a total deluge, an absolute down pour.... 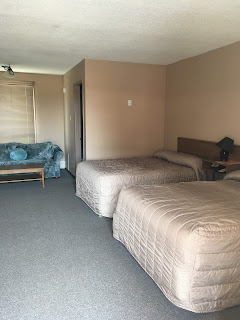 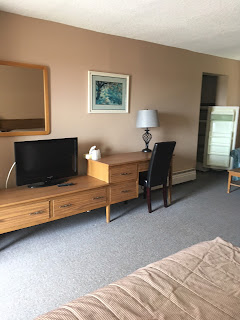 On Friday night the rally serves up a welcome dinner as part of your rally fee, and this year was no different except that lightning had knocked out the power to the better part of the entire town for about an hour and as a result dinner was late getting underway.

Josee Milroy and her team of volunteers including Twiggy did an amazing job serving up ham, veggies, lazy cabbage rolls, buns, salad....

Music got underway with Anthony Poirier the one man band and people started coming in from their soggy campsites to listen to him. The Steven Spencer band came on at about 10 pm and rocked the house out.  When my time to hit the hay came I took the shuttle sponsored by Wing Shot Guiding Service over to my motel room and closed the door on an amazing day. 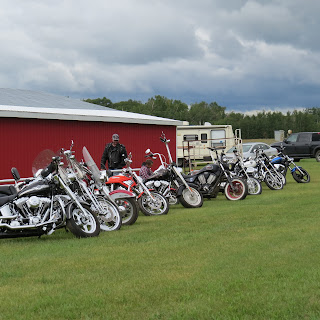 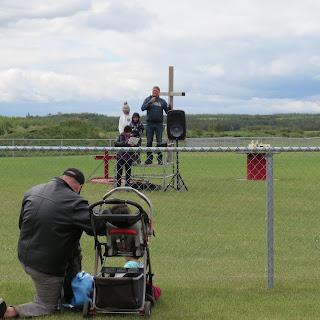 Weather people don't seem to have a very good handle on the weather, it had been calling for partly cloudy and 22 on Saturday, but that never materialized until Sunday. (At least everyone had a nice ride home weather wise!) The sun finally came out late Saturday afternoon/early evening, but the temperature never hit 22 and the wind was cold and bitter.

In spite of Mother Nature's hissy fit, the riders just kept coming, and coming and the unofficial head count was about 485 people registered, down from 700+ of the year before, but still an admirable and respectable number!

Of course the poor ice-cream vendor didn't sell a lot of ice cream, but the mini donut vendor did a decent trade. MJ Hearing didn't do big business, but the Golden Gopher Tattoo Studio & Cafe in Derwent (Reneta and Dana) worked their fingers off until the wee hours of the night on both Friday and Saturday and Dana was tattooing on Sunday morning! 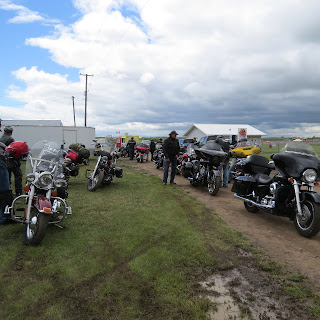 Tara Allen was on hand with her massage studio and there was a gal there selling skull candles - Wicked Wanda was selling her leather gear and managing sales of the Run to the Hills Memorial Rally gear and Wayside Fallen Riders Park gear and The Bear Biker Wear was also on hand as usual - Bear and Penny are a joy to be around!

Lots of bikes entered the Show 'n' Shine, mud and all, about 350-400 took in the roll call with Pastor Wes as the of 28 names of lost love ones were read out after a short sermon and there were about 40 brave souls who went out on the poker run.

While people were out on the poker run, I helped Bob get the rodeo games set up and generally ran around for him, pitching in where I could.  You see Bob is the Vice President of the Canadian Motorcycle Tourism Association that I am executive Director of and so we help each other out, a lot. 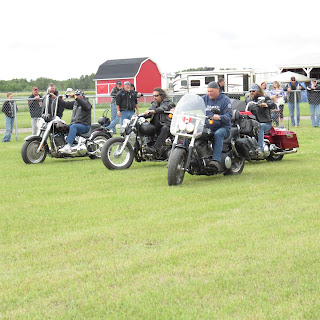 After the rodeo games, which were shorter than normal thanks to the wet ground conditions and the ensuing safety concerns, I caught up with some good friends and was invited for a feast of corn, roasted potatoes and baked BBQ'd pork chops. Joey Carruthers Csapo, you rock!

There was a wedding happening, but word throughout the campground was that the wedding party did not really want the rest of the rally goers to attend, so many just stayed in the camping area while the wedding party were riding around honking their horns and revving their throttles letting everyone know they were part of the wedding.

The wedding party held a dinner and the $10 per plate they were asking for went to the Rally as a thank you for providing them the venue, music, etc....again, because a rumour had circulated very few from the camping area attended which sadly hurt how much the rally earned, but it is what it is and I know Bob was grateful for the gesture! 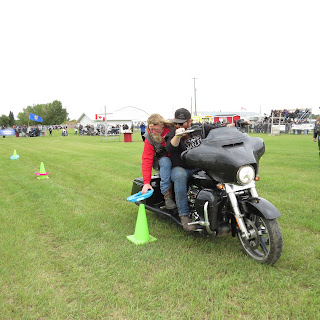 There were a whole host of wonderful people from the community of Two Hills doing security - the Fire Department, town and county had a number of volunteers working their butts off and the gals that were running the bar were phenomenal.

Heck earlier in the day the mayor had come out to welcome us all and to thank Bob and the whole Rally Committee for everything they do through the motorcycle community that aides Two Hills town and county so much.

The Fire Chief for the county, Brad Straty rides and volunteered in security, and one of the longest serving members of the Ag Society, Cleta Dieken attended the rally on her bike. Sherry Baker, the manager of the Junction Inn loves riding and volunteered on the shooter bar, Deb Tupetchka a town councillor was on the gate with her mom handling registrations.  In fact county employees and volunteers from other organizations in Two Hills were all taking part in helping this rally succeed. 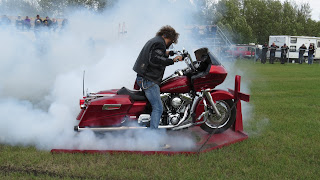 Out of all of the volunteers though, Ricky is probably the best loved of all them all, as this man who has his challenges, is the most friendly ambassador a community could ask for and as usual he was out keeping the grounds clean. Ricky's smile, hugs and hand shakes are well received by all!

Throttle Up was the band for Saturday evening and man, those guys managed to pull people out of the campground in large numbers! 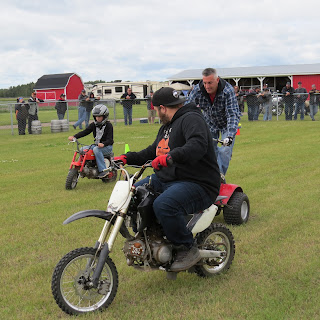 After Miss Charlie Vegas, the burlesque dancer did her routine - which was incredible given the small stage for her to perform on, I brought Rita around with me to sell raffle tickets.

Well that little beaver ended up being a real money maker and together we made over $300 for the Memorial Rally's coffers in about an hour and a half!

One of Bob's volunteers is a gal named Sue Tchakuk and when I asked, she brought me 8 boxes of crayons. She liked this idea I had of holding an adult colouring competition!

We divided the crayons up into beer glasses and started handing out the scavenger hunt maps, you see Road Trip Rita is featured on the back of the Two Hills Scavenger Hunt Map! 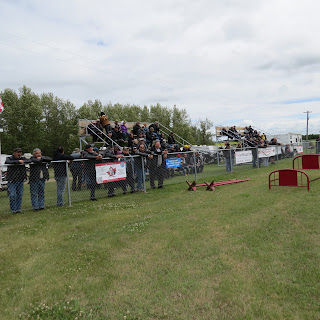 The prize for this contest?
A shot of Jack Daniels....

What we didn't expect was the number of people who coloured my beaver and the number who actually submitted their creations for judging!

Bob Ross chose the winning entry by Sharon and Nadine.

I laughed until I cried at the good old fashioned, tongue in cheek adult humour.

My face and tummy hurt from laughing so hard.

Afterward, we danced, and we had fun and we laughed and that's why everyone loves this rally - everyone has FUN - there are no fights, and
when people do get a tad carried away as they are want to do sometimes, they all listen to Bob and they knock it off.

There are no attitudes and no campgrounds left dirty for someone else to clean.


And you know what...this rally attracts that kind of respectful person, no matter their age.


This year saw all kinds of young, fresh faces, and they exhibited those same qualities, and that says al lot about what the rally committee, the town and county of Two Hills is doing right, TOGETHER. Promoting a welcoming attitude based in respect, and they get that respect back. 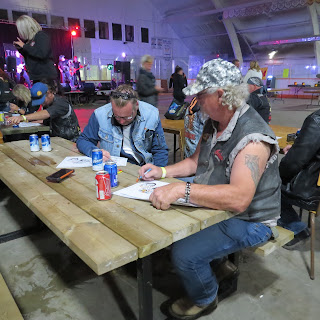 
This is a rally you need to come and experience.

WARNING....it will steal your heart and cause you to be a repeat attender! 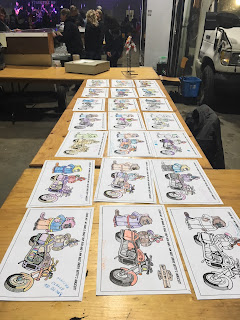 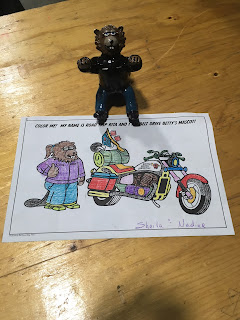 To see more photos from the rally  visit this link: https://photos.google.com/album/AF1QipPJz_mT9oyzDGxKOJ8TL2ULkDo1EThH09M9N8wr

And to see some of the burnouts and other videos visit this link:
https://www.youtube.com/playlist?list=PLXAWHZhbbRFoHLQcPLFR0yTHb3GZoxGYv

If you are blessed enough to be riding today, please remember to Ride like everyone around you is blind and can not see you!