Will 2015 start with more of the same? The SAGA continues!

6 of those sued had been offered to settle and consent to dismiss orders were signed by all 6, BUT
4 of the orders never got filed. Why? Well, Ray's lawyer was suspended, then Ray decided to self represent and he took possession of the documents pertaining to his case.  He never filed those orders.

Since July - Ray has pretty much has quit communicating with any of the legal people or defendants in the suit and has left everyone in limbo for several months now.

As a result of the lack of communication, I have been keeping a very close ear to the street in an effort to stay on top of any news or information about this man or his dealings.

I went to his BC Securities Commission hearing in October and it was a real eye-opener as to how Ray, his wife and their accountant have been doing business. It will be mid February before the commission makes its decision, and from what I heard, saw and read, I do not believe that their decision will be in Ray's favour, but I am no lawyer...

I went to that hearing hoping to confront Ray face to face, but instead ended up giving his security hearing lawyer, Gregg Alphonso, some documents to pass on to him as Ray did not testify at his own hearing.   Although he does not represent Ray in the lawsuit that Ray launched, the attorney agreed to speak to Ray about the matter.

Mr. Alphonso did at least speak to Ray about the documents - new consent dismiss orders that included me.

I know this because via email, this attorney asked me to guarantee that I would never write about Ray or his family again.

I told him that I would stay away from all topics outside of those that might affect the motorcycle community and since then the lawyer refuses to answer any correspondence and so has Ray.
I have not spoken of that hearing at all until now as I was hoping for a resolution to this situation.

It has become quite obvious to me that there will not be a resolution unless I agree to never write about Mr. Sasseville, link to any articles about him in the newsfeed on our web site....

I have sent several unanswered emails to the securities hearing attorney, Ray and Joan, Ray's partner in the suit.

Why would Mr. Sasseville refuse to sign off, refuse to communicate?
Is he planning another motorcycle event?

Will 2015 start with more of the same?
The SAGA continues!

An interesting little tidbit of information was dropped in my lap by way of an oilfield buddy who recently stopped in to see me. I began hunting to see what I could find out about what he told me.

It took me a few days, but....low and behold, look what I found: 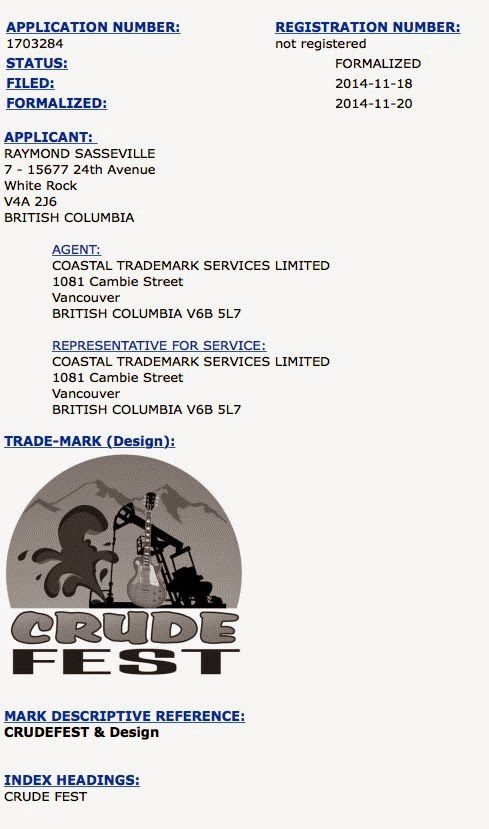 Interestingly enough, in my research I came across the fact that there is an event called "Crude Fest" in Midland Texas.  thecrudefest.com

Is this another case of Ray trying to copy the recipe for an event from the USA that is popular?

I called the people in Texas to find out if somehow, they are aligned with Ray. They are not. They knew nothing of the event in Canada or the man.

I am told that this new endeavour is to take place here in Alberta, however I have not as of yet, found out where.

If he has the funds to do a trademark application, complete with a logo design, then he should at least have the funds to file the 4 (already signed by the other 4 parties) Consent Dismiss Orders he has in his possession and do what is right, what he agreed to do.

I feel so bad for the Sicamous Chamber of Commerce, that little not for profit does not need this thing hanging in limbo like this, no one does. The communications that our attorney has does mean that the case is over for the four who signed the Consent Dismiss Orders however, because they were never filed, the case still exists as far as the courts are concerned.

Since Ray is self representing, he could at least have the decency to respond to legal communications, it's not like an email is costing him anything.

I have personally emailed Mr. Sasseville and offered him the opportunity, yet again to put his side of things forth and still ZERO communication.

I'd like to push for this case to be expunged. There is no way my reputation will ever be fully repaired, and I doubt I could ever recover my costs. Above and beyond the close to $10K the lawyer has cost, there are many, many other ways that this has impacted my business and my life.

SO, I will be looking at creative ways to raise the funds needed to just get this thing over and done with.  My attorney feels we have a good shot at getting this thing expunged for lack of prosecution, at the cost of another $3K - I hope he's right.

In the mean time, I am working at staying focused on all of the good that is going on in our little company like the newly formed coffee company, the great Beat the PMS Blues Online Show n Shine that is going to help ease the PMS and the new - PMS - How Bad is it Contest, where there will be a little money up for grabs to those willing to share their coping tips.

The Canada's MOST Rider Friendly Contest is shaping up to be fabulous with lots of great sponsors coming on board!

The website upgrade that has been killing both Ali and I should be done by the end of the first week of the new year...

Yes, in spite of this fly in my in the ointment called Ray Sasseville, things are progressing well!
I am a very blessed woman with so very much to be grateful for.

I am deeply, deeply thankful for the support this community has given me.

Have a fabulous day everyone...