The Veterans MC and Remembrance Day

0 RCMP, Remembrance Day, Royal Canadian Legion, Veterans, Veterans MC 12:03 PM
A+ A-
Print Email
Before I share with you the information regarding conversations with Inge Kruse of the BC/Yukon Command of the Royal Canadian Legion and the journalist who wrote about the situation in Ladysmith BC, I want to discuss the Charter of Rights and Freedoms.

The Charter of Rights and Freedoms - A Double Edged Sword
(Get a beverage, cause this is along winded one, basically two articles in one!)

Under the Charter, we all have:

a) freedom of conscience and religion;


(b) freedom of thought, belief, opinion and expression, including freedom of the press and other media of communication;

(c) freedom of peaceful assembly; and

I am a firm believer that our veterans fought to protect these fundamental freedoms and that if we take them away for some, then we all risk loosing them.

Many believe that some members of the Veterans MC conduct themselves in such a way as to allow or create a perception that they are 1%ers and not just a traditional outlaw club.
Even if it is true that some of these members are less than forthright about their conduct and beliefs, their conduct of today does not negate that they are veterans and have served their country.

Just because I have taken the stance that the Veterans MC has the right to attend Remembrance Day services, to march and lay a wreath in their cut, does not mean I condone illegal conduct, if there is any.

What it means is that I believe the Charter of Rights and Freedoms applies to everyone.
If we attempt to strip them of their rights based on belief and not fact, then we are no better than the countries of the world who suppress their peoples.

If the RCMP and other police services do their jobs properly and gather the proof that these men are not who they say they are, if the courts convict the offenders, and the offenders serve time and pay their debt to society, great. This becomes a non issue.  While in jail, they have most of their rights and freedoms stripped from them, but when they get out, they are once again citizens and the Charter applies to them again.

I do not like the way a lot of people dress these days, but, under the charter, they have the right to dress the way they want. I do not agree with various religions, but again, under the charter people are allowed their choice on religious belief and affiliation.

What you like and don't like has very little to do with the essence of the fundamental rights & freedoms in our country.

We live and let live. It's what our soldiers have fought to preserve for all of us.

You can't preach/scream charter rights & freedoms and then exclude someone because you don't like them or their ideologies, unless their ideologies go against the charter.

The members of the Veterans MC are citizens of Canada and veterans who served this country.
No matter what else they have done or are, no one can take away their rights to freedom of association, freedom of peaceful assembly.
It's illegal to do so and to do so would be a crime against all citizens of this country.

The good news is, with great freedoms and rights comes great responsibility and consequence.

The offending members, if there are any, will eventually be caught for their offences, tried and convicted and they will pay the price for the way they chose to exercise their freedoms.

And no organization anywhere in the world, is comprised of ALL good people.
In every walk of life, in every organization, you will find those who break laws, do criminal things.
Let me remind you that the RCMP has had its fair share of "bad apples", but we don't go around condemning every cop as a result.
In case you need some reminding of the misdeeds of some police officers visit this page: http://en.wikipedia.org/wiki/List_of_controversies_involving_the_Royal_Canadian_Mounted_Police
or this one: http://thenonconformer.wordpress.com/2010/10/25/canadas-bad-police-officers/

We need to remember that in a court of law, the individual who commits the crime does his own time.

The whole police force did not go to jail for the crime of Const. Desmond Sandbox who admitted to beating a prisoner in a cell at the Lac La Biche detachment on Sept. 13, 2009.

It is NOT our job to decide if the members of the Veterans MC are who they say they are.


It is our job to decide if we want to associate with them or not, if their values align with ours or not, and nothing more.


What we must not do is allow anyone to take away their Charter Rights & Freedoms, for if we do, we risk loosing them for ourselves.


Who is telling the truth, will we ever really know, and does it even matter?

Yesterday, late in the day, I finally got a chance to speak to Inge Kruse, the executive director of the BC/Yukon Command of the Royal Canadian Legion.

In my conversation with Ms. Kruse, she says that she was "misquoted and that one statement was not hers at all. She, however did not want to take the writer on, she said she wanted to focus on the veterans and Remembrance Day."

She expressed that "this experience has taught her a lot about the motorcycle world." She says she has spoken to members of the Veterans MC and has expressed that the Legion has NO DRESS Code when it comes to who marches or lays wreaths and all branches have been provided with the same information:


This is the official statement from the BC/Yukon Command of the RCL:


BC/Yukon Command does not have a policy regarding who may or may not attend Remembrance Day Ceremonies. The Legion strives to be a welcoming environment for all - particularly Veterans whether young or old. In that spirit, we encourage and welcome all Canadians – regardless of affiliation - to attend a ceremony in their local communities this Nov. 11th, and we hope to see Veterans and active duty service people of all ages marching to honour our fallen. What one chooses to wear while paying tribute to those that served our country is a personal choice, and the Legion takes no stance on this issue, and we apologize for any confusion.
We would also like to point out that BC/Yukon Command has invested heavily in programs to help a new generation of Veterans. These programs include the Veterans Transition Program which helps those suffering from PTSD, Cockrell House which provides shelter to homeless Veterans, and the BCIT Military Skills Conversion Program which helps advance the civilian careers of former and current Canadian Forces personnel.
- BC Yukon Command of the Royal Canadian Legion

Here are the comments attributed to Inge Kruse in BCLocal and the Nanaimo Daily News:
(To read the article for yourself please visit: http://www.bclocalnews.com/news/341906341.html)

“Let’s say you’re part of a Lions Club and you were your Lions Club uniform with medals — it’s frankly a bit tacky,” Kruse said. “It’s not that veterans can’t march, that’s ridiculous. It’s that there’s a lot of baggage that goes with motorcycle patches, especially when they are the one-per cent patch.”

The reference is to the patches of outlaw clubs. Asked if the Veterans MC is an outlaw club, Kruse said “I don’t know everything about those guys. All I know is my branch has asked them to take off their patches and their vests.”

A message on the Veterans MC club website says: “We are not a 1% club, nor do we have the intention of becoming one.”

Veterans MC club members planned to wear their colours to Chemainus if Ladysmith blocked them, but Kruse said Legion Command has send the same message to every branch.

“This is the stand of the branches and the RCMP,” Kruse said. “When the RCMP make advice, we’re not going to just shake it off.”

I wanted to get to the bottom of the comments that were attributed to her in the BCLocal, Nanaimo Daily papers.  I reached out to the reporter who wrote those articles, Darrell Bellaart, because without his comments regarding his integrity as a journalist this article would incomplete.

He refused to speak with me as he did not want to become a part of the story. He wanted to retain his neutrality. He did however make this statement: "As I've stated elsewhere, everything I directly attributed to her, she said. Period. Anything within quotes is a direct quote. Word for word."

According to the above referenced article written by Mr. Bellaart, Staff Sgt. Ken Brissard, stated that he met with the Legion Wednesday about the upcoming parade and “they were not asked to exclude anyone.” 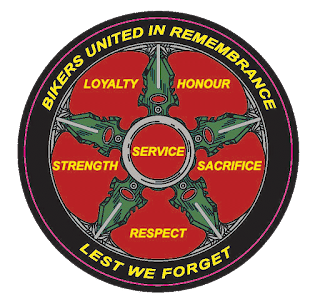 I have reached out to the Staff Sgt. Ken Brissard who is a very thoughtful and eloquent man and he unequivocally requests that, "All Canadian citizens come out and take part in Remembrance Day services."

So, what is the truth? Who started this mudslinging fest that hurts the Royal Canadian Legion, our veterans, the motorcycle community and the citizenry of this country at large?

We'll never know, not with any certainty.

And in the grand scheme of things does it even matter?  What matters is things have changed for the better.

Please go to a cenotaph near you, wear what makes you feel proud, thank a Veteran for the freedoms and rights you have, and be grateful that there have been and continue to be those who are willing to put their lives on the line to defend our rights and freedoms.


All data and information provided on this site is for informational purposes only. The Belt Drive Betty Blog makes no representations as to accuracy, completeness, currentness, suitability, or validity of any information on this site & will not be liable for any errors, omissions, or delays in this information or any losses, injuries, or damages arising from its display or use. All information is provided on an as-is basis.