Potholes, the ever present danger in a Canadian Spring Season

0 11:33 AM
A+ A-
Print Email
Many of my friends and I complain about the potholes here in the Grande Prairie and northern regions of Alberta. We have lots of reason to complain too, potholes here end up being craters that whole 4 x 4 trucks can get swallowed up in, I swear!  And I also swear that those suckers multiply faster than rabbits. It's almost to the point that sometimes you have to choose which potholes you are going to hit because avoiding them isn't an option!

While we'd like to think we are special, according to Bill Gardiner, potholes are a problem all across Canada.

I had the pleasure of interviewing Bill, our favourite Canadian TV Mechanic again, this time in his capacity as a spokes person for Kal Tire.

Bill's reputation as an automotive mechanic is legendary here in Canada and so it makes great sense that he and Kal Tire have teamed up to educate people about the hidden dangers of hitting potholes.

According to Bill and the survey that Kal Tire did (1,000 Canadians responded) 40% of those who hit a pothole say it damaged their vehicle.

39% of those said the damage was to the alignment of their wheels.

When you feel the front end of your car vibrating, or shaking, if you feel a wobble in the steering wheel, or a pulling sensation, that's a good indication that your alignment is out.

A blown tire or a severley damaged rim are rather obvious to spot, and are also common results of hitting potholes too hard or hitting ones that are very deep.

However, what most people never consider is the damage they didn't see or feel right away. 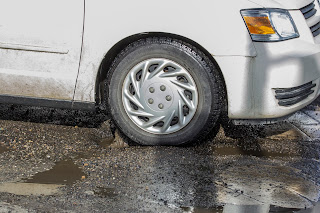 A minor tweak in the rim of your wheel can create a leaking situation and depending on where that tweak is located it can mean the integrity of the rim is shot, but you might not realize that the rim is actually the cause of that leak.

Your suspension could be compromised.

A leaking shock or strut will cause poor handling.


Un repaired damage is a hidden risk to us all!


Hitting a pothole hard enough can create a reduced ability to steer, absorb and dampen the shock of the impact. It also makes the maintaining of road contact and supporting the vehicle’s weight just a few of the suspension issues that can arise from hitting pot holes - either repetitively or in a harsh manner.

An interesting, but very disturbing fact that came from the survey conducted by Kal Tire...
Of the 32% of motorists who experienced an alignment issue (pulling to one side), only 44% of those drivers had the damage fixed.

That means, they have a poorer handling vehicle that is putting themselves and every other motorist at risk potentially.

If nothing more severe than the damage to their pocket book is inflicted on them and others, they are lucky, however an out of align vehicle becomes costly, quickly.

Their tires will wear out prematurely, struts and other alignment components are also going to wear out earlier as well.  Other mechanical components like the breaking system, hoses and lines can also be damaged as the result of a hard enough hit.

It's spring time in Canada, watch for potholes, and if you do strike one with any force or speed, please consider having your front end checked at your local Kal Tire.

If you are on your motorcycle, hitting a pothole could have severe consequences, stay safe out there.

In other news, Canada's MOST Rider Friendly Community Contest is in full swing over at www.riderfriendlycontest.ca

Which community will move on to face Cape Breton in the final round?

Have you voted today? Well, if not - get over there and vote and help us determine which community moves on! Have your say!

Our Rider Friendly Directory at www.riderfriendly.com has now surpassed the 1,300 business mark!
This tool is sure to make your riding season just that much sweeter and it's free to use & free to register to take part in special contests where you can win hotel room nights, event tickets and so much more!

Have a fabulous day folks and for those lucky enough to be riding today, remember to ride like everyone around you is blind and can not see you!