Divisive and ill conceived laws and agendas and how they ruin well, everything.

0 Afghanistan Memorial, ANAVETS, Discrimination, Profiling, RCMP 12:28 PM
A+ A-
Print Email
I am normally a very outspoken character. When I found my voice after years of verbal, physical and sexual abuse, I vowed I would use my voice for as much good as I could.

I am someone you either love or hate and there are generally very few who are in the middle of the road on that. I know that, and I accept that.

Part of my job is to make people think.  If they get angry and call me all kinds of obscene names and jump all over every little mistake a person makes like it's some sort of conspiracy, so be it.  If they want to point mistakes out politely and help a person grow as a human being - WONDERFUL. As long as they are engaged and thinking, that's all I care about - I achieved my one and only goal.

Lately, I have been quiet on a lot of very contentious and touchy topics. I know, it's not really like me, right!

Some of the reason for the silence has simply been how busy I find myself these days.  After almost two years of being ill, doing only what absolutely had to be done, I find myself playing catch up in a huge way. I am feeling good these days and enjoying working again, but man oh man the work load makes it tough to balance things or find time to write.  And the fact that I find a 12 hour day is about all I can handle at work, well when you are used to producing for 18 hours a day and get reduced by 1/3 it gets interesting!

March is a very bad month for me. I have so many birthdays for people who are no longer a part of this physical realm that I am emotionally raw and so much of what I say becomes misconstrued because in March I can not effectively communicate my own name much less anything of any import.

April has gone by in a whirl with me filling out copious amounts of paperwork for grants, hiring a new CA because the one I had has done me no favours and left me and my books in a hell of a mess - ah the joys of running a small business - but please note that while I expound on the fact that I face challenges, I am thriving on them again, not dreading them.

Some of the reason for my silence however, has been the nastiness - it seems these days that if your viewpoint is not exactly the same as everyone on a certain side of any issue, you are lower than a snakes belly and unfit to be around.  It's hard to want to focus on the good, but be in this business and in this community. We can't even get along with each other or agree on much more than insurance rates.

In our country of Canada, we have huge political divisions that are tearing at the very fabric of our culture.  Our prime minister seems hell bent on bankrupting our country and leaving a legacy of debt and destruction for generations to come not to mention welcoming in ideologies that do not integrate well with western culture.

We have extreme Islamists attempting to destroy anything that represents freedom and so many hell bent on letting them destroy our country and its freedoms.  Female genital mutilation, the rape culture and many other unsavoury scenarios have played out around the world, yet our prime minister has not learned from those happenings.

If you voice your opinion, you'd best be feeling really strong, be wearing teflon, and not engage in rhetoric that will revert to mudslinging, name calling and other debasements.

Simply state your case and never look back, or be prepared to be skewered by such vehement anger and hatred that you are truly terrified for the future of our world much less our country.

As a PTSD survivor, I have found my own unique ways of dealing with the things that trigger me.  I can control myself so much better now than even a yer ago, but it takes constant effort and awareness.

Islam, Sharia Law, Profiling of Motorcyclists - these things trigger deep responses in me.

Today I am feeling strong and I have a few things to get off my chest.

So here goes nothing....

I am also very PRO Our Charter of Rights & Freedoms and when the people on the Blue Lives matter side of the board start infringing on the Charter, I get really cranky - why?

Because it's hard to walk that line, to support the cops because they are necessary,  because there are bad people who do bad things in our society, communities and world, and YET, to have those very same people we rely on to solve murders, robberies etc., target the motorcycle community over its clothing the way they do year after year is getting sickening - and it puts one in a quandary, which never feels good.

Right now, there are a number of things transpiring that go against the Charter Rights of ALL Canadians who ride motorcycles and wear brand tee shirts, support clothing, regardless of who that clothing is supporting and it's got to stop.

Divisive and ill conceived laws and agendas ruin everything.

In a country where women can wear Burqa's and conceal their identity, even when voting, how in the H E DOUBLE HOCKEY STICKS can it be "Immoral or Illegal" to wear ACAB gear (ALL COPS ARE BASTARDS is what some claim that means, but I also know it can mean All Cats Are Brilliant).  Or Support Red & White, Support Green & White - really? What happened to free speech?

In this day and age when you can have piercings and tattoos all over your face and you can wear pants that make you look like you crapped yourself, why is motorcycle apparel so offensive?

I'll tell you why.  Sadly the police and the politicians of this country have an agenda.

The police agenda is to ensure their jobs and careers are safe, their egos are properly primed and their point of view properly pushed.  Public safety is their last priority - budgets and careers folks - that's what it's about these days. Having a bunch of "Bad" boys who ride motorcycles that are visible, makes career security a guarantee.

Politicians have an agenda - to get elected and force you to live by their principles and ideologies, even when they are misinformed.

Our community is under siege in Bathurst, in PEI, in Alberta and really all across this country.

The police are preventing people who wear ACAB and any support gear from entering the Tim Horton's on 82 St. and why? Because they can under the petty trespass act.

Bars in Calgary force riders to turn their Harley shirts inside out or leave - again the petty trespass act protects these kinds of discriminatory practices.

So what is the big confusion? What is the hullabaloo all about?

IGNORANCE - LACK OF KNOWLEDGE and subterfuge - (the unwillingness of the police departments to disseminate the truth).

Not their conduct, their clothing.

Now, the police and liquor boards would have you believe that all those who wear three piece motorcycle club colours are criminal or an undesirable element of society and that they (the cops & liquor boards) are trying to protect people from gang violence.

YET - they will not explain to business owners what patches are legal and illegal - wanted or unwanted... Why? Because none of these pieces of clothing is illegal. They just use this subterfuge to make life hard for all of us. They abuse the petty trespass act, I have even heard of bar owners who are threatened with their liquor licenses if they let these articles of clothes be worn on their premises. So...what ends up happening? Innocents get caught in the cross hairs.

I have, over the years written extensively about our patches and what they really mean. I have spoken on the topic until I am sick of it. (Here is one of the articles I have written about how challenging the patch issue is...  http://beltdrivebetty.blogspot.ca/2014/07/a-little-education-on-mc-world.html)

The police will not tell politicians or citizens who is or is not "legal", business owners and event hosts get bullied into complying with the cops and it gets media coverage thanks to the politicians who are spreading mistruths  that end up supporting the cops. And our community looks like a bunch of villains.

It's disgusting but unless we find a lawyer willing to take a challenge to the supreme court, and we have the millions of dollars in funds it is going to take to fight this profiling, and someone to take the lead - we are going to continue to be persecuted.

So get used to it Canada.

WE ARE A VISIBLE MINORITY because we ride and that makes all of us an easy target,
and that my friends is why the police can attack our lifestyle and our fellow riders. 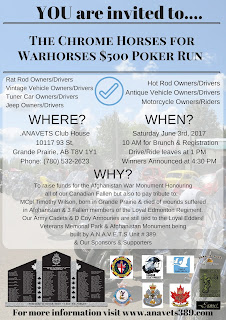 Our Canada's MOST Rider Friendly Community contest is winding down.  Unofficially it looks like Port Alberni BC on Vancouver Island will be the 2016 Season winner!  We'll know once the audit has been done, but that's how it's looking!

Here in Grande Prairie and area - the A.N.A.V.E.T.'s has a few things going on you should know about - read their posters!

Look for me to be writing again, far more consistently! 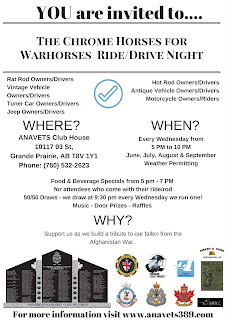