1 Law & Politics, Riders Against Government Exploitation 12:26 PM
A+ A-
Print Email
I had my first interview with Don Thompson the VP of products for SGI. (Saskatchewan Government Insurance)

As many of you have probably heard, our brothers and sisters in Saskatchewan are up against the hard wall of massive rate hikes if SGI's request is met with favour. (Up to 400%)

Statistics as we all know can be generated in any way you want them to appear.

You can compare year over year "accident" payouts for a category and say they have gone up 15% and not say that the group affected grew by 100%.

So instead of doing the usual type of interview with the man, I decided to simply ask for the facts, the hard numbers and guess what. I had to email him with a list of questions to get answers on and the facts sent back to me.

I had asked members of R.A.G.E. (Riders Against Government Exploitation) for a list of questions they wanted answers to and then did my best to ask as many of their questions as possible.

Here is the letter of request that I sent out following my brief discussion with Mr. Thompson.

Thank you for speaking with me today,

Here are the questions and the answer or information I seek.

Q: How much is the average motorcycle claim?

Q: How much is the cost of the claims?
IE - What is the amount for the claim as opposed to the costs to administer the claim.

Q: What was the total amount paid out on motorcycle claims? We hear that $9 million was the short fall - what is the total?

Q: What the increase is for motorcycle accidents/injuries/costs over the last 10 years

Q: Cars, pickups and SUV's/Mini Vans account for how many road users?

Q: And what percentage of claims?

Q: What is the average claim for an auto collision.

Q: How much is the cost of the claims?
IE - What is the amount for the claim as opposed to the costs to administer the claim.

Comment: In Alberta we have PL/PD coverage that you can purchase which offers section B benefits for wage loss and out of pocket expenses.

Q:Why are Saskatchewan riders not offered a similar option?

Comment: There are 165 claims involving bicycles according to TIAS Report
Q: What portion of these claims go back to motorcyclists assuming it is divided by all 31 classes to bear the cost.

Q: Is the actual number of bicycle claims higher or lower?

Comment: You claim the 53% of motorcyclists are at fault in collisions.
Request: What data can I see to verify that fact?

Request: How many motorcycles were involved with Animal collisions?

Request: How many motorcyclists were hit in left hand turning situations?

Q: Has SGI considered the damage to the motorcycle industry, the dealership, the staff if no motorcycles were sold?

Q: Has SGI considered the impact to the environment if there are fewer motorcycles and more large resource using vehicles on the road?

The documents I included in my request so that we were dealing with the same information are: 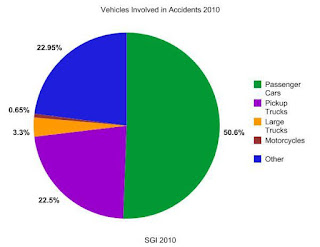 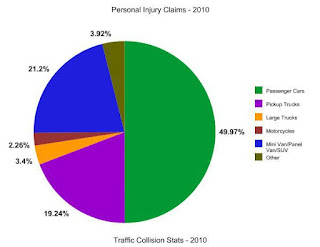 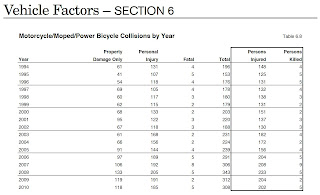 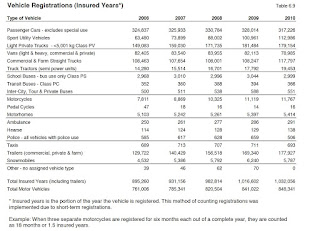 I am looking forward to the man's email back to me and will give you what he has to say when I have it.

The questions I did get answers to where:

Q: Does the Ticket Surcharge go into the Auto Fund?
A: Yes.

Q: According to the TIAS Report there are 11,747 motorcycles registered and yet you state 25,000 motorcycles in your radio comments.

A: The number of 11,747 is called Earned Exposures

Exposures are a measure of what is being insured. For example, an insured vehicle is an exposure. The term earned means that the exposures were in fact at risk of a loss in the period in question. For example, if a vehicle is insured as of July 1, 2008, then during the 2008 Accident Year, this would represent an exposure of 1/2 to the insurance company.

Q: What about exploring mandatory rider training and giving discounts to this who take training?
A: It is something that has been discussed and has some possibilities.

According to Mr. Thompson the TAIS Report is not the data they use for determining claims so I have to wait until he can provided the data that SGI uses.

That's what is fit to report right now - when I have more I will be passing it along.

Have a great day everyone