0 BC, Law & Politics 7:03 AM
A+ A-
Print Email
As I am just back from a tour with Celtic Rider Motorcycle Rentals & Tours, I found it rewarding to see that they had won yet another award.

I can say from first hand experience that their dedication to tourism in their country is amazing. It's rare to meet people who love what they do and where they live and who exude enthusiasm the way they do. So Paul, Mick, Sibodhan, Liam et al - congratulations for being rewarded for a job well done! You truly deserve it.

In other news, BC's Hells Angels have set themselves up as constitutional champions on behalf of all British Columbians.

The have mounted a challenge of British Columbia’s Civil Forfeiture Act in the B.C. Supreme Court.

According to the article in Maclean: “It’s really an end run around checks and balances in the criminal process,” says Michael Vonn, policy director at the B.C. Civil Liberties Association. End Quote

And the Hells Angels lawyer agrees. Begin Quote: the group’s lawyer argues, is not a proven criminal organization, therefore, forfeiture of its properties in east Vancouver, Kelowna and Nanaimo is a violation of its Charter rights. End Quote

The BC Civil Liberties Association says: Begin Quote: It’s a battle others in similar situations can’t afford to take on, says Vonn, noting the minimum cost to defend a civil claim is tens of thousands of dollars. Because of this, she says, many on the receiving end of forfeiture claims end up settling. The Civil Liberties Association also questions whether penalties administered through forfeiture fit the corresponding crimes. While originally meant as a tool to target organized crime, regular folk have had their homes liquidated for housing a handful of marijuana plants, or their cars seized for speeding, says Vonn. End Quote

I have to say it, bizarre as it may sound, that the Hells Angels are probably the best suited to take on this charter challenge. Is everyone who wears their patch a criminal? I would hazard a guess and say no.  Have they been convicted as a criminal organization? Not in BC.  Do they have the money to fund this kind of fight? Probably, they all seem to have good paying jobs or businesses.

Queensland Australia is heating up the battle of the bikies with the first arrests under their new laws.

Under these new laws it is illegal for bikies to attend their clubhouse, to work in Tattoo Parlours, they are not allowed to wear their colours to hotels or be seen in groups larger than 3.
Under the new laws, automatic mandatory 6 month jail sentences for the above crimes will be handed out.

About the first arrests - from SBS:

Begin Quote: Peter Johnson and Mark Filtness, both 47, were arrested in Cairns on Friday morning and charged with offences under the state's new anti-bikie gang laws.

The pair were granted bail in the Cairns Magistrates Court about 4.30pm (AEST) on Friday.

The men must surrender their passports and are due to reappear on November 1.

They were arrested on Friday morning and each face one charge of being a participant in a criminal organization entering a prescribed place.

The court heard that the pair told police they had been members of the Odin's Warriors for 20 years.

Their lawyer, Philip Bovey, said the pair had been at the gang's clubhouse as both of their flats were located on the same property.

He said the men were arrested shortly after Johnson visited Cairns Police Station to ask whether it was against the law for him to be living on the same property as the clubhouse.

Mr Bovey argued the men didn't pose a flight risk or a threat to the community.

He said Johnson had no criminal history, while Filtness had only been convicted on minor charges in 2000 and in the 1980s.

Johnson works as a diesel fitter in Weipa on Cape York and Filtness is a truck driver.

Police prosecutors opposed bail, saying the men were a flight risk as the club could provide financial assistance.

They argued that the pair could flee as they face a mandatory six month jail term if convicted. End Quote


Reportedly the government in Queensland is planning on building a new "Bikies ONLY" prison, where each prisoner would be in lock down for 23 hours a day, among implementing other harsh conditions.

Begin Quote: "Mr Bleijie says the confiscated bikes will be crushed if gang members are convicted of the offences.
"Legislation that I introduce tomorrow into Parliament will have certain new offences for criminal motorcycle gang members," he said. Upon those offences being committed, there will be immediate impoundment of the motorbike and upon conviction of the particular offences, the motorbikes will actually be crushed." End Quote

Begin Quote:
Members of 26 bikie gangs declared criminal organizations in Queensland face being locked up in maximum security jails for a minimum of 15-years unless they rat on associates.

Legislation introduced to State Parliament yesterday will make it almost impossible for outlaw motorcycle gangs to exist in Queensland with jail terms applying for riding in groups or even wearing club colours to a hotel.

More serious offences such as drug possession, trafficking, dangerous driving or assault will carry additional mandatory sentences of 15-years, plus an extra ten for office-bearers, unless the gang member becomes a police informant. End Quote

Ordinary riders who ride with a groups/association/club that is non 1% in Queensland are terrified as one man was stopped 11 times in 11 days!

I for one am very concerned about the laws in Australia because like it or not, there are police officers who are rogue and will harass innocent riders just because they wear their riding group patch and the cops in many cases don't know the difference nor do they appear to care to.  Even if it only happens infrequently - it's wrong.

Then there is the BC Hells Angels issue.  I for one say good.  In enough cases to warrant my comment, the punishment has far out weighed the crime.  If the Hells Angels are truly a criminal organization then it is up to the system of law we have to prove that, charge them and have them convicted.  But again, as with the case in Australia, what happens to the rest of us who ride with non 1% patches - are we going to have to waste hundreds of hours, money etc to continually prove we are who we say we are?

Is there NO Balance that can be found when it comes to 1% issues and the lives of ordinary people who ride?

So - what are your thoughts on the key two topics for today?

Are the BC Hells Angels Charter Champions for all British Columbians and the Harsh new bikie laws in Queensland Australia - what do you think?

This should provide some heated conversations - let's see if we can be more level headed than government!

Join us on Facebook, Twitter, Google+, Linked In or right here in this blog for some discussion - hopefully civil about these topics.

In the meantime, I leave you with a few funnies, shared with me by friends on Facebook and via emails: 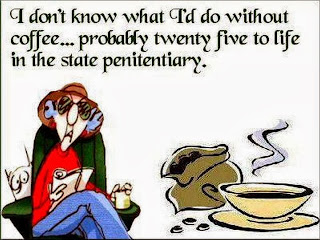 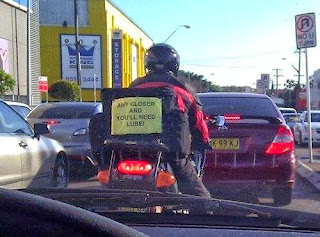 If you are lucky enough to be riding today, remember to ride like everyone around you is blind and can not see you and please remember to dress for the slide and not the ride!