January 10th is coming soon and I need your help

0 Community, Law & Politics 8:59 AM
A+ A-
Print Email
The deadline to file my response to the lawsuit filed against me made by Sturgis North, Ray Sasseville and Joan Hansen is January 10th, 2014. As of today's date I have raised $1,620.00 with promises of 2 cheques in the amount of $500 each being in the mail.

For this first round of this suit I need to raise $5,000.00.  I want my day in court to face Ray and Joan and prove that what I have had to say is true. That what I have gathered for evidence shows a certain pattern of behaviour.  I want the documents I have becoming public record, I want to clear my name and protect my community.

I have come, helmet in hand to ask the motorcycle community to help me defend myself.

For those of you who don't know the history of Sturgis North here is a quick glance at what has transpired since the first event held in 2011.  The first event was a financial failure and faced a number of challenges because of the way the venues were laid out, communications and organizational issues. Depending on which set of documents you read, the debt from 2011 was between $200,000 and $975,000

2012 - the event moved to Vernon's Motoplex and was again a financial failure, the venue was terribly laid out and it again had communication and organizational issues.
To visit Vendor Alley you had to pay $20
The liquor control board put huge sanctions on the beer gardens.
The BEU was everywhere.
The 2012 event left close to $400,000 in debt.

The 2013 event was cancelled and during the down time it was rebranded it to Sturgis Canada.

I started out as a supporter and sponsor of the event. I became a detractor about 2 minutes after I rode into the Motoplex venue the second year when I saw how things were laid out.

As it turned out, that investigation took some serious turns and I learned a lot of things that made me uncomfortable about Ray Sasseville in particular.
I published some of those the findings here in my blog and again in our newspaper the Busted Knuckle Chronicles.

Because I have again brought their event to the fore front of people's minds, reminding them of the history, I am being sued along with 6 others for slander, libel and defamation.

Next to being reduced to asking for financial support for my defense, having to revisit all of the evidence I have, is the most painful thing I have had to do in a while, but I have been doggedly working to pull it all together into a chronological format for the lawyer.

I decided to revisit some of lawsuits against the above mentioned parties after reading Martha Wickett's articles in Salmon Arm Observer the other day to see if anything new had transpired.
I sent my research assistant off to retrieve the documents on the Ministry of Justice web site.

Besides the case Sasseville et al have initiated against myself and 6 others, there are lawsuits that were initiated by Michael Smith, Warren McKay, Okanagan Aggregates, Robert Lopez,and Marjorie Paula Sasseville that are still active and a couple that were withdrawn or dismissed and one that indirectly involves Sturgis North. You can purchase the documents at: http://www.gov.bc.ca/justice/  under Court Services. Just search Sasseville, Sturgis North.

As I read the documents of the Michael Smith case over, my memory was refreshed and I realized I had known about this case, I had just forgotten it. 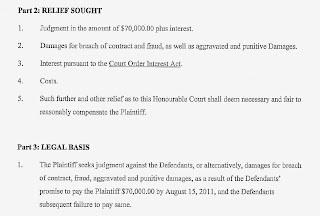 And as Martha Wickett stated in her article, Michael won his lawsuit by default judgment on August 16th, 2012.

The next lawsuit Martha alluded to; the Motoplex one:
Okanagan Aggregates DBA Motoplex Speedway is suing Sturgis North Encore Productions, Ray Sasseville and Joan Hansen for $398,567,34. According to the documents, on July 20th, 2012 the plaintiff agreed to advance the defendants $539,023, on the 25th of July 2012, the amount advanced had been reduced to $454,11.72. A guarantee had been signed by both Sasseville and Hansen.
The plaintiff recovered some of the money that had been advanced, leaving the outstanding debt at $398, 567.34.

Ray, Joan and Sturgis North Encore Productions Inc are counter suing and allege that they never had an agreement with Okanagan Aggregates regarding the advance of funds. They also claim, among other things, that the Motoplex took all of the ticket sales money and converted it for their own use.
They want the judge to dismiss the Motoplex suit.

And I did discover something new - a lawsuit filed by one Marjorie Paula Sasseville filed on Feb.12th, 2013.

Whoever this Marjorie Paula Sasseville is, Ray's wife Edith, has power of attorney for her.  And Ray's wife on behalf of Marjorie, as Power of Attorney,  is suing Ray for $140,000.00 alleging that Ray signed a promissory note for $140K at 12% interest.  What is most interesting to me is that Marjorie lives at the same address as the plaintiff.  Interestingly enough, it is the same address that has always been identified as Ray and Edith Sasseville's home address.

Please support my Defense Fund if you can, and if you can't, please consider sharing my story.
With your support, I will be able to continue the work I do in the riding community.
I deeply appreciate your help.