The 25th anniversary version of Summer Stomp - A HUGE Success

The 25th anniversary version of the Summer Stomp was a roaring success.

Riders from all over western Canada converged on Sicamous BC, and were treated to a wide variety of entertainment.

I missed the burnouts and first round of bands on Friday as I had stopped in Golden overnight so I could see a friend in the hospital.

I heard nothing but rave reviews and was wishing that I could clone myself.

Saturday did not disappoint either though. It poured from Golden to Malakwa but then the blue skies materialized and the rest of the day was picture perfect Okanagan weather.

The main street of Sicamous was a motorcycle only zone and was lined with vendors of all types just like they are at all the major American rallies and there is no fee to visit these vendors or any of the entertainment on the street.


Kamloops Harley-Davidson was there with their event truck, Rollin' Rubber from Vernon was letting riders know about their tire services, Behind the Bars was selling all kinds of gadgets and goodies, and the list goes on!

There were handmade belt buckles, handmade shirts, leggings and all kinds of food vendors and then of course the beer gardens.  The music was rockin' and people were dancing to the BC DC Band - the AC DC tribute band. What a hoot!  This is a fun band to watch and listen to.

At 4 pm the poker run with over 100 bikes rolled in and that was a signal for the stunt riders to start doing their thing. People lined the street watching talented young men whip their machines around doing stop pies and all sorts of stunts.

The winds were too high so Kris Garwasiuk was not able to perform any freestyle jumps, but the crowd thoroughly enjoyed the entertaining riders on their sport bikes.

After the beer gardens closed down on main street, I headed off to my accommodations in Sorrento.

If you don't reserve your accommodations in Sicamous a year in advance, you aren't going to find a motel or hotel room!

I headed back to the main Stomp grounds at 10pm. 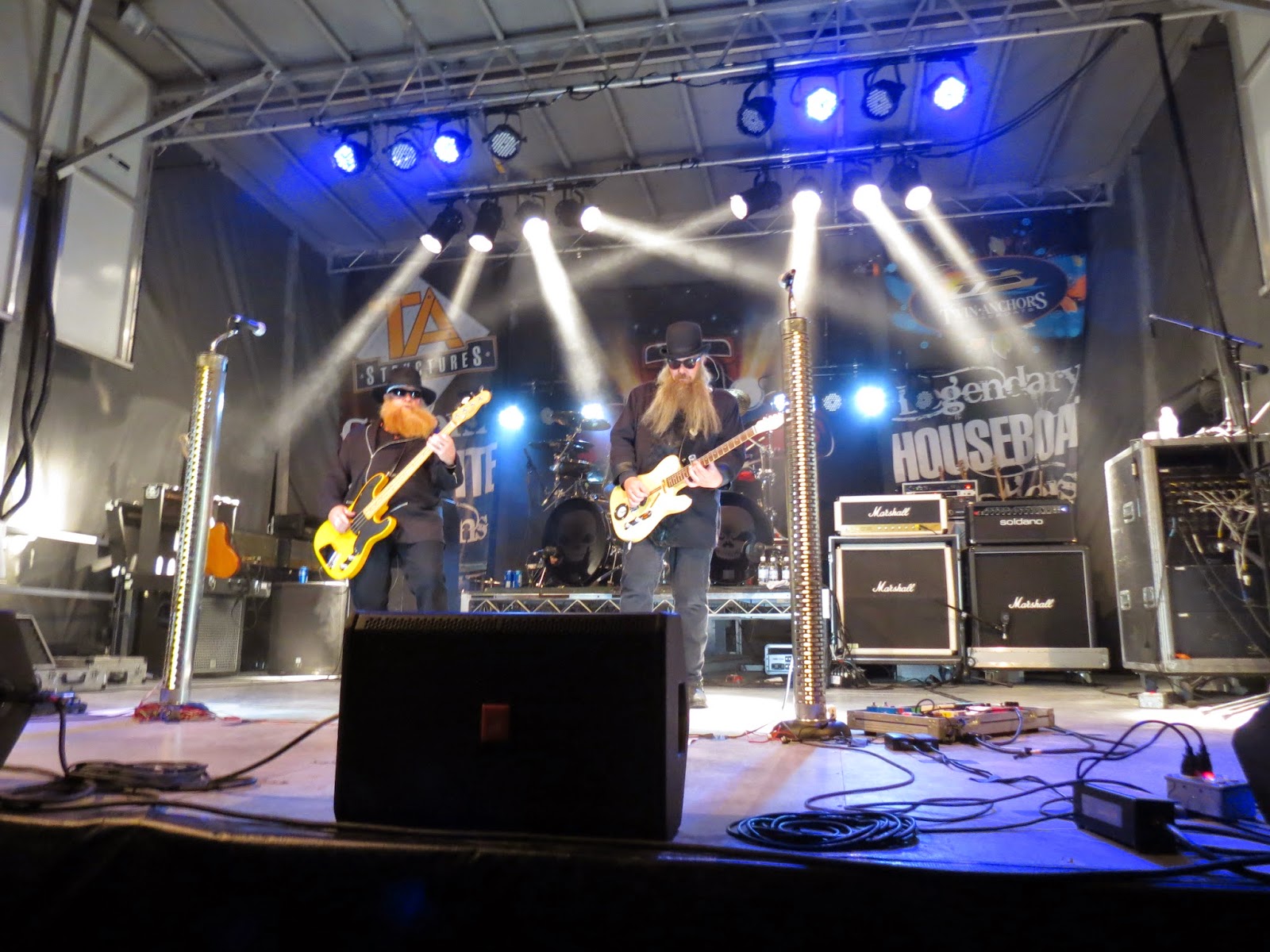 The venue was laid out very well with tenting off to the right of the main gates and vendor alley straight ahead and ringing the perimeter.   There were big tents and picnic tables for those who wanted to partake in the food and beverages out of the heat of the day.  The big Houseboat where the VIP's were partying was full and people were hollering and hooting - having a blast.

Vendor Alley still had many vendors open, Up Your Leather, from Vancouver, Rose's Front Room from Blackfalds Alberta was there as was Dark Lord Clothiers just to name a few.

There were 4 - 1% er booths on the grounds, and lots of new club patches everywhere.

This time, as in the past, there were no issues with the clubbers other than the fact that they bring the gang squad with them. A few patrons were uncomfortable with the police presence, but the officers were pleasant enough and not oppressive in their numbers.

LegZZ, the ZZ Top Tribute band brought the house down. There were people everywhere and not one person was standing still, they were bouncing around, singing to the music, dancing and just having a smoking good time.

At midnight was the wet tee shirt contest and there were a dozen gals who decided they wanted in on the action.  Some people don't like this aspect of a lot of biker events, but the ladies who got involved seemed to love the attention they were getting. 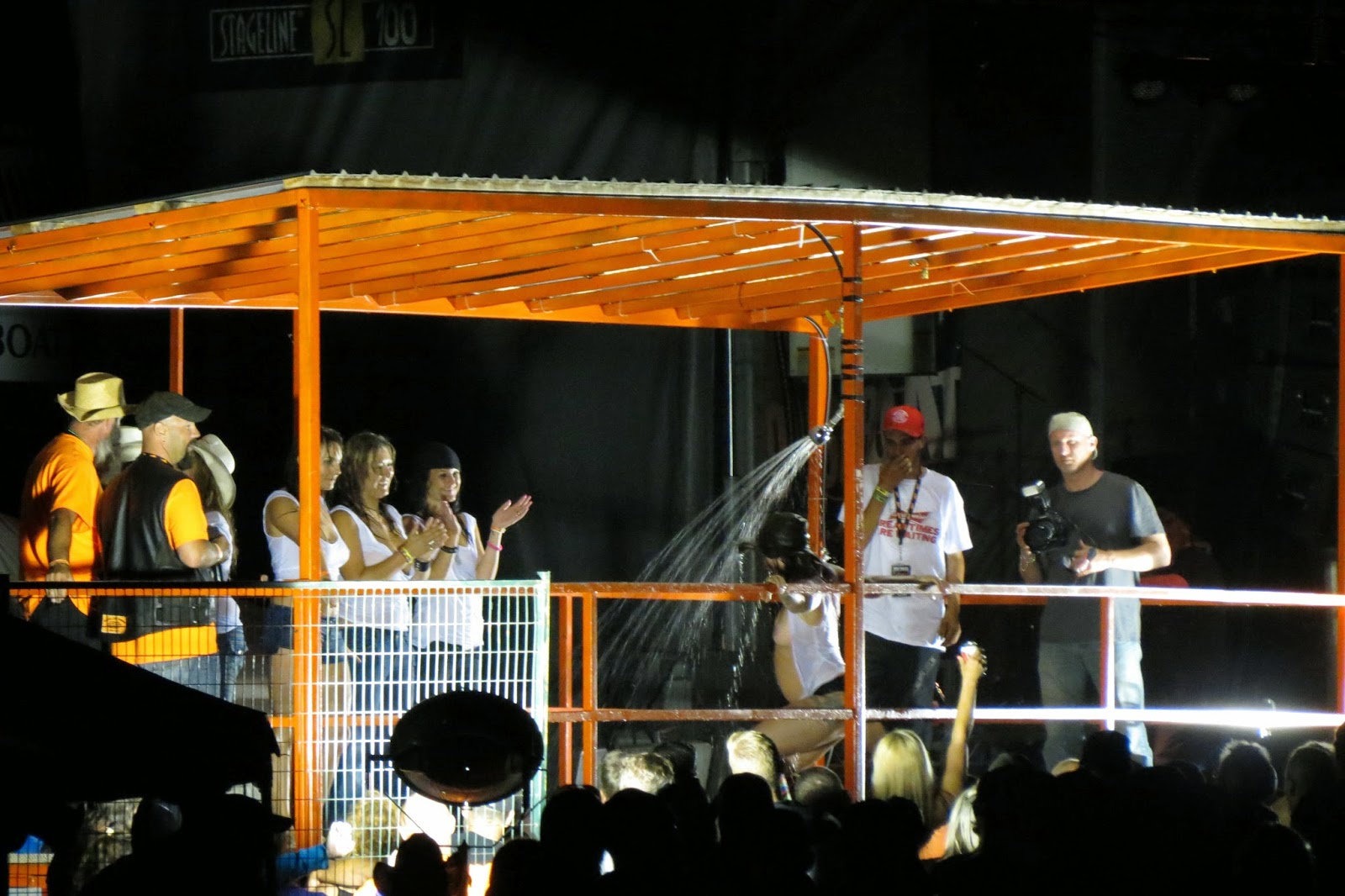 I myself don't really get into the whole wet tee shirt contest, it's just not something that I enjoy and certainly not something I would participate in, but there are many who have no issue with dropping their laundry in front of a few thousand people.

I did note that the police who were on the main gate all wandered down to watch the contest and they seemed to be enjoying the show, even the lady police officer.

As I headed back for the main gate to leave, so did the police.

It had been a long day but thoroughly enjoyable day.
I want to thank Steve Hammer and the entire Stomp team.  I truly enjoyed the heck out of myself!

For those considering attending the Summer Stomp, stop considering it and just do it, you'll have a blast!  Not only is the Stomp a well run event, but the location is awesome, tenting is included in your ticket price and the town of Sicamous is so welcoming that you will feel right at home!

(The following photos are from insight-photography.com and give you a glimpse into the first 2 days of events that I was not present for):