0 Canadian Motorcycle events, Merritt BC, Sturgis Canada 12:04 PM
A+ A-
Print Email
Thanks to some friends who had a booth at Sturgis Canada, I was able to attend the event on Saturday evening, so that I could see first hand what was going on and speak to people about how they felt about the event.

With a venue like the old Merritt Mountain Music Fest site, one would have thought that this event would be stellar, after all, according to articles in the Merritt Herald, they had a new and improved management team with rock solid finances.  http://www.saobserver.net/news/236404261.html

They had a great line up of bands and the coordinators have had two previous attempts to learn from and they had almost two years to plan this one, so what went wrong?

According to some of the locals that I spoke with, the town was invited to the event for free on Thursday evening, all they had to do was show their DL or another piece of ID to prove they lived in Merritt and they'd get free entry. There were, in the picture that was shared with me from Thursday night 12 people, 6 of them staff/volunteers watching the bands. 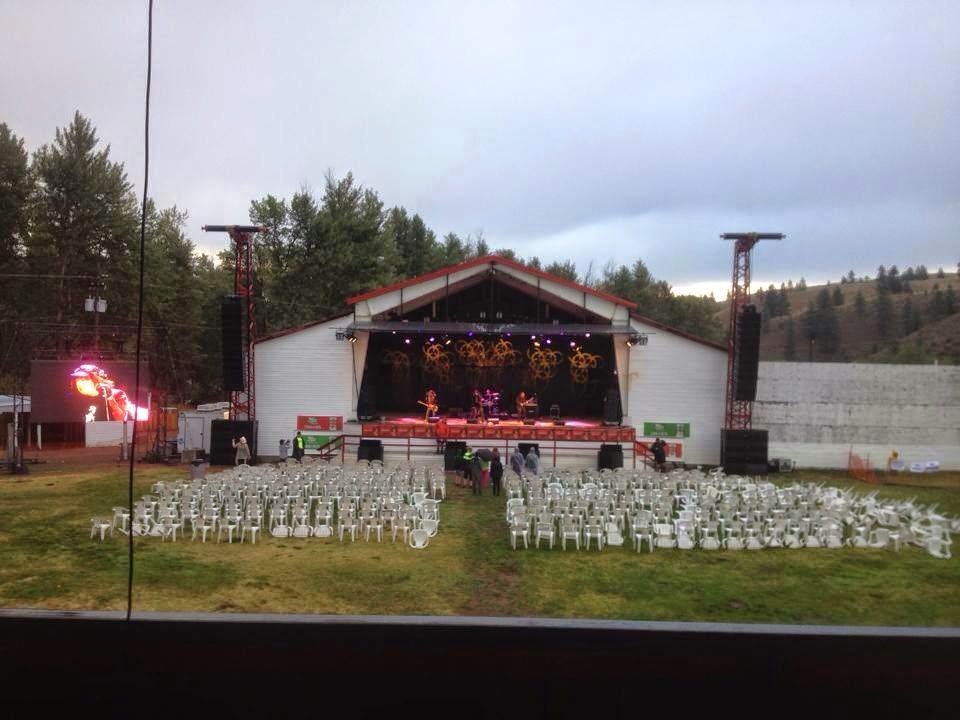 So why did the town of Merritt not embrace this event?

Here is my thought, why would a community want to support a group that sued another city, a chamber of commerce and a mayor over the burnout competitions? The suit was publicized in the regional newspapers: http://issuu.com/blackpress/docs/i20140115070529177/1?e=1205826/6357636

If you are going to sue a partner community and a non profit, then that might make other partner communities a little leery, no matter that the suit was dropped only five short months later.
When you sue a town, you are in effect suing the taxpayer.

It did rain hard about 2 hours before the event opened but reportedly it had cleared off by 7pm.

Why did this event not have great attendance?

I have a number of points that I'd like to touch on here...

There was almost no marketing of the event, I saw one ad in the Port Dover Maple Leaf, they had their bus at the Cloverdale Rodeo, but beyond some radio and the odd poster, there was no real hype about the event.

Did you know that there was a Sturgis Canada App? Neither did I until I was going through comments on their Facebook Page looking to find out what others were saying and feeling.

Their promotions, their web site, Facebook page and their entire marketing plan lacked the super human effort it takes to get the word out, at least that's the way it appeared to me.

They went head to head with the PNE, where reportedly there were some awesome concerts like Trooper on the Thursday night that Sturgis Canada opened, that were free with your $18 gate fee: http://www.pne.ca/thefair/index.html.  You could also reserve seats if you wanted to pay an extra $20.

They went head to head with the Salt Spring Island Toy Run, the Defenders Poker Run, the Airdrie Bikes & Bulls event, the Assholes Toy Run and many, many other events.

When you combine the lack of marketing with the time of year and the volume of motorcycle events and all of the music festivals in BC, you really reduce your chances for success.

When it comes to the riding community, many people who attended in the past decided to take a wait and see attitude.  The few who did decide to give it another chance, have had very strong comments about their experience: 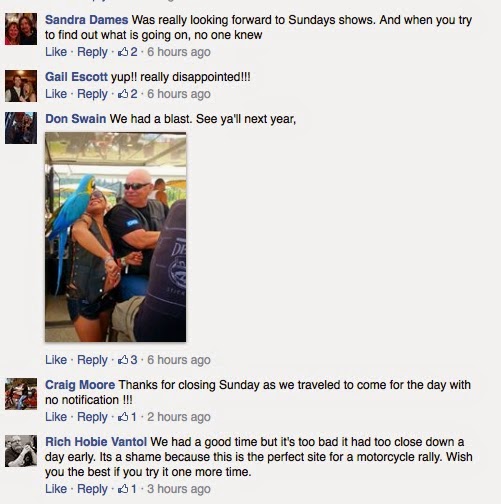 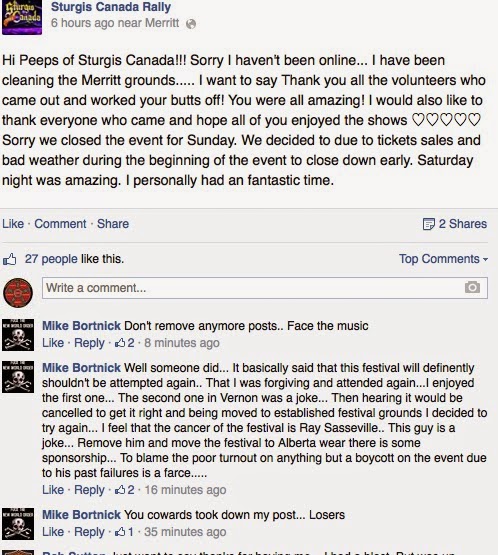 Reportedly the motorcycle rodeo games never took place and the Motorcycle Cowboys never performed. The Veteran's and the Breast Cancer Poker Runs were both cancelled as was the Cabbage Patch Wrestling. The show n shine apparently went off, but no one seemed to know much about and no winners were announced. The Miss Sturgis Canada competition is another event no one seemed to know about and there was little publicity for.

The Mad Mike Rocket Jump was postponed, but no where was that fact mentioned to people, and apparently the VIP tickets weren't so VIP according to the posts and comments made by some of the VIP's. 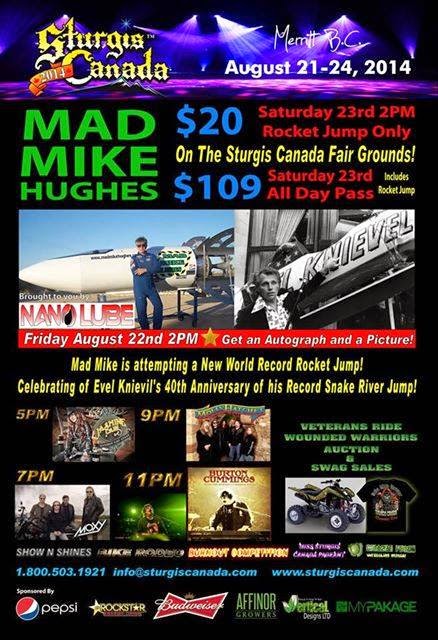 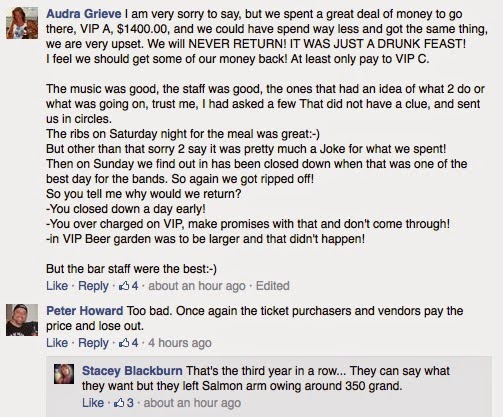 In speaking with some riders from Saskatoon and Regina who had bought VIP tickets, they were pissed that they were charged in American funds.  They were given the choice of a pulled pork sandwich or a beef brisket on a bun for their meals other than the one night when they got ribs.
The snacks that were served were nothing more than small cups of potato chips. There were all kinds of non VIP people in the VIP beer gardens and non VIP in the main stage seating area. That was just some of Annette and Herb's observations.

There are so many things that went wrong with this event that it is truly hard to find anything other than the music that went right. The production crew from SWAV did a phenomenal job making those musicians music come across loud and clear and the guy in charge of lighting did an amazing job of making sure they looked good.  The gent running the Jumbotron camera was incredible at his job.

The people who attended the event enjoyed the music, who couldn't, it was awesome, but the lack of communication, the lack of marketing and two failed attempts in the past created a scenario that I am sure no one fully expected.

If there were 100 people to watch Moxy, I'd be surprised and by the time Burton Cummings came on stage there were close to 500 people present. Some people say I am wrong and that the number was more like 350.  Either way, it was not the turnout that was hoped for I am sure.

It has been interesting attempting to get to the truth as to why Sturgis Canada was shut down on Sunday.

I have heard rumours about everything from the liquor license got pulled to the production people pulled out for non payment and all things in between.

The truth that I have been able to uncover is that the liquor license was NOT pulled, not by the RCMP or the Liquor Board.

The truth is the organizers cancelled Sunday:

No where does the person making the updates for Sturgis Canada address the issue of refunds or partial refunds for the fact that the event was only three days and not 4. Nor do they address the cancellations of various events or any kind of compensation for the lack of activities.

I spoke with Nick Brusatore of the band Franklin's Dealers who were supposed to play on Sunday.
Nick is a business man and a musician.  He was also a sponsor of Sturgis Canada to the tune of $50,000.  He is disappointed that the event was cancelled on Sunday but also says he understands that sometimes in business you have to make tough decisions.  Since the attendance was so poor, he said he could understand them shutting down to save the costs.

The money he sponsored for the event was supposed to go towards paying for Katey Sagal to come and play, but he did not know why she cancelled. I have sent an email in to Ms. Sagal's booking agent Belle Zwerdling to see if I can learn why she cancelled.

I contacted the Port o Potty supplier, Interior Portable Rentals out of Kelowna, the manager declined to comment on why the port o potties were chained up on Sunday morning, he stated he knew there was animosity between myself and the coordinators and said the details were between him and the client and none of my business.  I thanked him for his time and moved on to the next calls.

The RCMP in Merritt had their media relations officer, Constable Tracy Dunsmore contact me regarding the allegations that the police were heavy handed and had removed the road signs directing people to the event. Cst. Dunsmore assured me that the RCMP did not remove any signage and expressed that many members were sent home and that only regular time officers were on duty and that was because the event was so quiet. It appears that Sturgis Canada will be getting a refund on the enhanced policing costs. Only one Hells Angel's booth was on hand but it was in the campground, away from the general public at the festival site ergo there were little or no BEU agents present or at least they weren't highly visible.  The police did have a road side check stop, but they were stopping ALL vehicles, not just bikes. 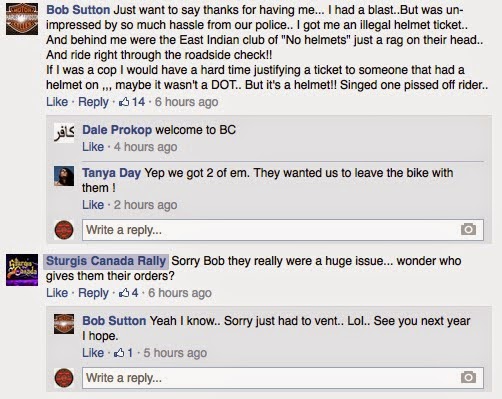 During my conversation with the constable, she expressed that in their detachment there are 8 officers who ride, including the Staff Sergeant and for anyone to think they hate riders, well that would be wrong.

They were just doing their jobs.

There was a ticket handed out for a helmet violation to a gent who was wearing a beanie that was not DOT, he was the most vocal about the police being oppressive. Personally I found the officers on duty to be very pleasant and all seemed to have a good sense of humour.

That alone should tell you a lot - I generally don't enjoy the police at many events, but these people were more than pleasant and friendly, in much the way they were in Sicamous.

I have a call into the sound company, SW Audio Visual out of Kelowna, my goal in talking to them is to find out if in fact the coordinators told them there would be no bands for the day or if there was any other reason they pulled out early.

Keith Sharp of Music Express had some harsh comments regarding Sunday:

I have emailed Keith to see if he will talk to me about what transpired.

I will do a follow up on this event if I learn anything of value, it is early days and the fallout has just begun of that I am sure.  Every event, even the ones that go off seemingly perfect, have fallout to deal with!

I hope you have had a wonderful riding season, I know mine has been busy and exhausting and I am looking forward to finally getting home and getting back into full swing work routine, I have a lot to accomplish in the next while and I am stimulated in spite of being tired.

I am looking forward to squeezing my hubby and snuggling my cats and sleeping in my own bed.... that's gonna be a bit of heaven!

If you are blessed to be riding today, please ride like everyone around you is blind and cannot see you and please consider wearing good gear....dress for the slide, not the ride.