Motorcycling in Canada, A Ride Through Our History - Part 1

Man’s ever-innovative and inquisitive mind, coupled with his need to find new thrills and adventure, means the development of the motorcycle was inevitable. The early years of motorcycling are fascinating as they offer up some of man’s most bizarre experimental machinery!

Sylvester Howard Roper built the first motorcycle in 1868. It was powered by a steam engine, and was demonstrated at fairs and circuses.

Many modern motorcycle features, including the twist handgrip throttle control,  evolved from the innovations on this machine.

By the late 1880s, motorcycle development became influenced by the internal combustion engine that had arrived on the scene.


Hildebrand & Woflmuller developed the first production motorcycle in 1894, and theirs was the first vehicle of its type to use the term “motorcycle”.


In 1901, Royal Enfield revealed its first motorcycle; it came with a 239 cc front-mounted engine and a belt drove the back wheel.

From 1901 on, the burgeoning sport of motorcycle racing fueled innovations at a fast and furious pace and as a result, hundreds of motorcycle companies sprang up around the world.

Even Canadians got into the act of producing motorcycles.

The CCM (Canadian Cycle & Motor Company) produced the Lightweight Motor Cycle from 1908 to 1911, there are only three known left to be in existence and one of them is at the Deeley Motorcycle Exhibition in Vancouver.

Triumph Motorcycles provided the allies with over 30,000 of its newly created Type-H bikes in World War I. Dubbed by many as the first “modern” motorcycle, the Model H by Triumph was the first motorcycle to be produced without pedals.

By 1920, Harley-Davidson had become the largest manufacturer of motorcycles with dealers in 67 countries, although it lost that spot for a number of years to German owned DKW in early 1930.

After World War II, as part of the reparations for the war, Harley-Davidson in the US, BSA in the UK and MMZ in Soviet Union were given the plans for the DKW RT125.

In the US the motorcycle became known as the Hummer, in the UK as the BSA Bantam and in Soviet Union as the M-1A Moskva.

Although many manufacturers in the US had sprung up to build and sell motorcycles, by 1931, only Harley-Davidson and Indian were still standing.

From 1931 until Indian closed its factory in Springfield Mass., and Royal Enfield took over the name in 1953, Harley-Davidson and Indian were fierce competitors.

Here is a short list of some of the oldest American motorcycle marques:


The early 1900’s were an exciting time for the fledgling motorcycle community in Canada and Harley-Davidson Motorcycles played a huge role in that excitement and the growth of motorcycling as a sport and a pass time.

In 1907, Vancouver BC became home to the very first gas station in Canada; it was an Imperial Oil station. This would prove to play a significant role in the growth of motorcycling in Canada, and BC in particular, as the lower mainland of BC and Vancouver Island became hot beds for the sport.
Without a doubt, motorcycling in Canada would not have evolved into what it has today if it had not been for the Deeley’s, Fred Sr., Fred Jr. and Trev.

Some historical tidbits on the expansion of motorcycling in Canada:

I hope you enjoyed this little history lesson. 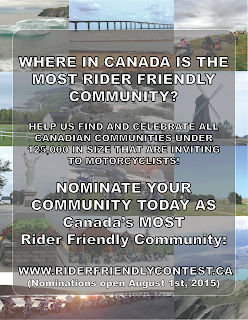 I also hope you will join us as we begin the quest to find Canada's MOST Rider Friendly Community.
Community Futures of Alberta,
Belt Drive Betty Media, EastLink TV and a whole host of motorcycle media sponsors have gotten together to create over $60,000 in marketing packages to be shared by 12 communities!

It truly will be a contest of Exploration, Discovery & Community Pride!