The Eighth Edition of the Run to the Hills Memorial Rally

0 Alberta, Run to the Hills Memorial Rally, Two Hills Alberta 1:45 AM
A+ A-
Print Email

Two Hills, Alberta is a small north-eastern community of around 1,500 people.
There is a motel, gas station, grocery store, pharmacy and a number of restaurants and convenience stores. They have a hospital, an active fire department, an RCMP detachment and pretty much any other amenity you could ask for.

Two of those amenities are Geleta Park and the Ag Society fair grounds, the home of the Run to the Hills Memorial Rally. 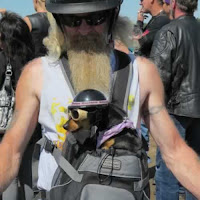 Campers started showing up 6 days early for the rally as they wanted to stake their claim to the campsite they wanted, nestled in among the trees! When I arrived on Thursday night before the rally, I was amazed to see over 100 people already there, all anticipating the fun and memories they would be making.

Friday was brutal, high winds and rain, but true to form the die hards just kept rolling in and over 200 people bellied up to the table for an incredible pig roast. Porky’s BBQ from Ashmont Alberta cooked those pigs to absolute perfection!

The beer gardens was filled with people enjoying the music from Black Crimson and The Marshall Lawrence Band and the beverages being served by a group of local ladies with wonderful senses of humour.
There was an unusual scavenger hunt that took place as well and those who took part had to do some crazy things like kissing Bob Ross’s arse! It was all a part of the stag and stag-ette for a couple who had met at the rally the year before.
Laughter and smiles filled the arena.

Saturday morning dawned with beautiful sunshine and the riders just kept coming in. The show ‘n’ shine was a marvel with lots of motorcycles and antique vehicles for people to ogle, but one motorcycle and rider stole the hearts and minds of every rider there. 10-year-old Scott Mackenzie and his Honda 50! This little man was the first one entered in the show ‘n’ shine and the pride he exhibited in that handed down motorcycle was palpable. He spent about 20 minutes cleaning and shining it up and then he talked to other riders about their motorcycles. Not one rider present wasn’t impressed with this young man as he rode his motorcycle out of the show ‘n’ shine taking away three trophies!
After the Show ‘n’ Shine, Pastor Wes took the pulpit and said a prayer over the riders and their machines that were going to be participating in the poker run. He also delivered the roll call of 17 names of riders who had fallen in the last year be it to motorcycle crashes or medical issues. Out of those 17 names, 4 of them were friends of mine. 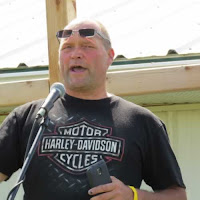 Pastor Wes soberly reminded the riders as to why we were gathered for this rally, to build a monument to all riders who have lost their lives. So many riders have their ashes scattered to the wind and there is no marker of their lives other than the memories we carry in our hearts. The monument and fallen riders is why this rally is held and he wanted to ensure that fact was not lost in amongst the good times and laughs.
The poker run takes people throughout the county of Two Hills and the small businesses that support the poker run were appreciative of the 75 or so riders who participated. 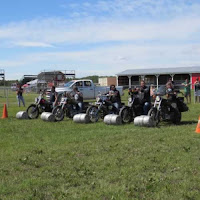 When everyone returned to the grounds, the bike rodeo started and the fun began in earnest with riders and their passengers showing off their skills in competitions like the slow race, the keg push, honey I’m home, the pantyhose race and the burn out pit. The stands were filled with spectators and the howls of laughter and cheers of support were loud and raucous.

After the rodeo, Casey Werney and Laurie Ellison became man and wife in the first wedding to ever be held at the rally. What a hoot that was! Casey was delivered to the ceremony site via a hearse supplied by the Forsaken Souls RC and yes; he was in a coffin! Laurie was delivered to the ceremony site on the back of Shawn Hamel’s motorcycle. During the exchanging of rings, everyone noted the little balls and chains that were attached to the rings and that brought a lot of giggles from the crowd.

The maid of honour, Josee Milroy had cooked up a fabulous turkey dinner that cost $10 a plate with the proceeds being donated to the memorial. 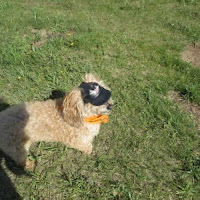 When I found out how much money was still needed to be raised to get the memorial built, I offered to have my head shaved if we could raise the $10K needed to make a serious dent in the construction of the memorial and getting the park ready for visitors. I had told everyone the minimum I would shave my head for was $2,000. We were all slated to be on stage for 11 pm. At 7 pm, after that big turkey dinner, I went and laid down in the camper I was staying in, supplied by Robbie and Ian of the Dark Horse Café in Dewberry. I had had too much sun and was sick to my stomach. No one came and got me and so I missed seeing Ted from the Protection for the Unprotected get his head shaved for kids with cancer.
I had only raised just shy of $1,200 because of having to lie down. When I woke up to a quiet campground around 1 in the morning, I grabbed the bag of cash and beetled down to the arena with a pounding headache. The band on stage when I got there was that Wayne Allchin band, sadly I missed the Tom Hammered band. 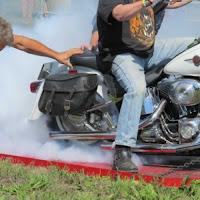 I donated the cash I raised to the memorial but did not shave my head. I took some flack for that but at the end of the day, I had set a goal and did not meet it. I will be hosting an online fundraiser where I will shave my head and donate my hair once again to Locks of Love. The last time I shaved my head, 5 years ago at the Grande Prairie Toy Run I raised over $2,000 and donated enough hair to make three wigs for little girls. I intend to donate it again – but, the goal truly is to help see this memorial and the gardens get built and so after Bob Ross figures out how much more he needs to get the job done; that will be the goal I set. I personally have over 25 names I want to see on the memorial, friends who are no longer with us. I want a place where I can go and reflect on their lives, the memories and the meaning their loves brought to mine. I am determined to help Bob reach his goal.
It will be filmed for airing on YouTube so that people will be able to see that the hair really did go!
Sunday was a day of mixed emotions. Unlike previous years where people packed up and were gone from the campsite by 10 am, this year many campers stayed until well into the afternoon, no one wanted to have to say goodbye.
I stayed on in Two Hills as Bob and I had meeting with Community Futures and a few other stakeholders in the region that also want to do what they can to see the memorial become a reality. You see the first 5 years of the rally, Bob lost money; money he had to put in from his own pocket to ensure all of the bills got paid. It took 4 years to negotiate the lease for the Wayside Park on the edge of town. It’s been a long road.
In the last two years, new roofs were put on the outhouses and the old cook shack that is being converted into a chapel and the buildings have gotten a coat of paint.
Bob has amassed a ton of sidewalk paving bricks, the concrete culvert that will serve as the base of the monument, the arch for the gate and a number of other items that will be used like folding chairs and tables, but there is a ton of work to do to the grounds.
Bob wants the landscaping done, flowers and trees planted, a deck on the chapel where people will be able to host BBQ’s and meals to support memorial services and then of course there is all of the brickwork for walk ways and the paving of the driveway to be done.
The last big ticket item is the metal sculpture for the top of the monument that needs to be done and the bronze plaque to commemorate the park. 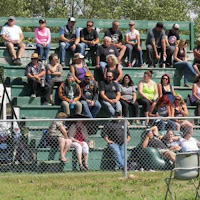 I was so proud of the people who attended the rally – they left their campsites immaculate and the only clean up that needed to be done was picking up garbage that the high winds from Friday had scattered along the fences and to have all of the equipment put away and the concessions scrubbed down. I also helped Bob clean up at the arena. Did you guys and dolls realize this man is literally a committee of 1?

Did you realize that he has NO help to do the cleaning and putting away of equipment? Neither did I, so I am glad I was able to stay and help him over two days to get everything whipped back into shape.
This rally has become one of the best rallies in Alberta with close to 400 people attending a far cry from its humble start 8 years ago when 40 people came out.
It’s well run with events taking place on a reasonably tight schedule that ensures no one is bored!
It’s a true riders event, one that is pure in its intent and purpose: To see riders have a place of reflection!
The Run to the Hills Memorial Rally is a MUST attend event that gives back to the riding community, a community that is too often wrapped up in helping everyone else but themselves.
Plans are already well underway for the 9th Annual event and it is my hopes that the numbers swell to 800 or a thousand so that the memorial can become a reality and the riding community can celebrate the lives of those we have loved and lost.
Belt Drive Betty
Editor and Rider
www.beltdrivebetty.com
www.bustedknucklechronicles.com
Posted by Belt Drive
Share to: