Borne in St. Ulric, QC on December 10th 1879, Jacob DeRosier would move to Massachusetts at the age of four and went on to be one of the winningest motorcycle racers in history.

The wiry DeRosier started his racing career riding bicycles. In 1898m he got the opportunity to ride on one of the new French pace bikes owned by Henri Fournier.

They were large-engined two-wheelers that were used for pacing bicycles in an effort to help the riders achieve faster speeds.  Fournier agreed to let DeRosier try one and he demonstrated so much skill that he was hired to ride the machines at bicycle races in Paris.

In 1901, Jake who was considered one of the top cycle pacers in the US, met the co owner of Indian Motorcycles, Oscar Hedstrom. He was offered a job and a motorcycle to race.

DeRosier worked for Indian for a short time, but ended up becoming a factory sponsored board track racer.

DeRosier had not only won the National Federation of Americas Motorcycles Championship in 1908, but held every FAM speed record there was to hold in 1911.

It is rumoured that his departure from riding Indian Motorcycles was as a result of George Hendee being disappointed in DeRosier's showing at the Isle of Man TT in early 1911.  As a result, Jake DeRosier ended up riding for Excelsior.

Excelsior's V-twin, pocket-valve motor was nearly unbeatable.  At Chicago's Riverview motordrome, in August of 1911 an Excelsior set a record for the mile, burning up the boards at an average speed of 88.9 mph.

By September, the former Indian rider was in the saddle and not only did he win the feature event at Riverview, he set an unofficial world record for the kilometer, at a speed of 94 mph. With DeRosier riding, Ignaz Schwinn's motorcycle company, Excelsior quickly became a serious race contender. Excelsior was being hailed as the fastest bike on the boards! DeRosier's tenure at Excelsior proved brief.
Jacob DeRosier's career, which saw him ride in over 900 races, came to an end on March 12, 1912, he suffered severe injuries to his left leg and thigh at Los Angeles.

Enduring three surgeries, as doctors attempted to repair the damage to his left leg, he succumbed to complications of the last operation on Feb. 25,1913.  Jacob DeRosier was laid to rest in Springfield Massachusetts, the home of Indian Motorcycles. As his funeral procession passed the factory, it was to the flags of the Indian Motorcycle Co., being flown at half mast and all production at the plant was ceased. DeRosier was 33 years old.

Suzuki, Honda, Yamaha and Kawasaki have many things in common.

They all got their start in Japan.  Of the four, Kawasaki was the late entry to Canadian manufacturing. Honda came to Canada in 1969, both Suzuki and Yamaha entered the market in 1973; Kawasaki did not arrive until 1982.

They all proved one thing, very quickly!

They could dominate on the racetracks of the world and one Canadian racer, Michel Mercier, rode all of them, winning many championships on each brand, covering 4 disciplines!
Born in Thetford Mines Quebec in 1953, Michel, like many a young man began his racing career in motocross.  He won many a motocross championship and held the prestigious #1 Canadian National Ice Racing plate 5 times!

People like Fred Deeley and Raymond Greff helped this great Canadian racer when he road dirt track. He was given a Harley-Davidson XR750 to ride in 1978 and he did not disappoint H-D either!

In fact this man, Michel Mercier was one of the first Bombardier team riders – in other words, he rode everything two wheels and did it like a champion!

Today Michel is the owner of Fast Riding School.  He teaches at Shannonville Motorsports Park.

No article on Quebec motorcycling would be complete without talking about the Gref family.
The Gref family is another of those families that has motorsports in their blood.

Charles Gref Sr. was born in 1912. His love affair with the motorcycle began in 1937 and by 1947 he was the Canadian Champion in the expert class of the Canadian Trials. He went on to be a director of the CMA and the president of the Montreal Motorcycle Club.

His son Raymond, a founding member and the first president of the Club Moto Saguenay spent over 50 years in the motorcycle industry. As a competitor whose racing career spanned 8 years, Raymond was only defeated once.

He went on to be a driving force in Quebec motorcycling. Not only did he found Moto International and Harley-Davidson of Montreal, but he was responsible for organizing many a race and could always be found promoting the sport.

Like his grandfather before him, Charles Gref Jr., the president of Moto International and Harley-Davidson Montreal had the motorcycling bug, only it found Charles Jr. much earlier in life.

At the age of 13 he had already won a number of trophies. He won the Miller Trophy, which in trials riding is the top honour in Eastern Canada, in both 1976 and 1977. His first win of the Miller Trophy came exactly 26 years AFTER his grandfather had won it!

Charles Jr. excelled in motocross, enduro, acceleration competitions and snowmobiling and the experiences he gained from being a competitor has helped him continue the tradition of Moto Internationale and Harley-Davidson Montreal being consistently top dealerships in Canada.

Quebec has produced so many inspiring motorcyclists, Yvon Duhamel, Duc du Four, Marc St Laurent, Pierre Corbeil, Paul Noiseux and many, many others.  It is no wonder that Quebec has one of the highest concentration of riders in Canada.


I hope you enjoyed our little ride through Quebec's impressive history of motorcycling.

1901 - The Montreal Canadians are founded

1940 - Quebec is the last province (of the time period) to grant the vote to women.

1941 - Legislation is changed to allow women to enlist in the Canadian Forces. 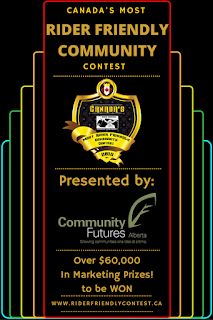