The "Wailing Wall" A Book Review

0 Book Reviews, Deedra Climer, Inkshares, Wailing Wall 9:12 AM
A+ A-
Print Email
The "Wailing Wall" by Deedra Climer is an examination of one woman's life and all of its turbulence.

Deedra Climer is a woman like so many others.

Raw and poignant this short, 89 page book is anything but a light read. From the first page, she sucks you into her life.


Raised by a single teenage mother who suffered a brain injury after a car crash when she was only 1 year old, Deedra lived in a drug addled and neglectful environment.

Physical love was a substitution for the emotional love she was denied as a child. As she put it "There was always someone who wanted me, at least for a little while."

Although she herself repeats the cycle and becomes a teenaged mother, she was determined to become a different parent from her mother.

Having a child out of wedlock in Memphis Tennessee in the mid 60's, the young Deedra was ill prepared her for how hard it would be raising a Mullato baby girl named Kimberly with a hearing impairment.

Her brief marriage to an illegal Mexican immigrant produced a son named Joshua, and an abusive relationship with a man named Ramon produces another girl, Claudia.

Finally she finds a loving relationship, marries and moves to Michigan. Things start looking brighter, but life has another body blow or two waiting for this woman. When her son Joshua dies in a motorcycle crash, she is forced to go back to Memphis and it is there that she relieves her life in her mind's eye.

Loosing her son at the tender age of 23, she takes you through the wild ride that is the grieving and self examination process.

Deedra Climer, tells her life story in painful detail that pulls you in.
She makes you feel it all, the raw pain, the fierce love and pride, the extreme anger, confusion and feelings of being inept and conflicted. The "Wailing Wall" is a life's story worth reading for if nothing else, you discover your own empathy. 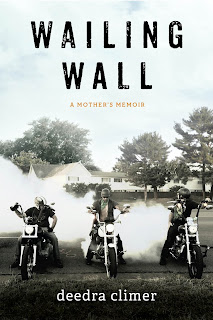 Wailing Wall: A Mother's Memoir by Deedra Climer  is published through Inkshares
Posted by Belt Drive
Share to: