Stripping away our Charter Rights and Freedoms: The Royal Canadian Legion, the Police and the slippery slope of discrimination.

It started because a police officer took offence to a veteran wearing motorcycle garb at a Remembrance Day event while also wearing his medals. The police officer called it disrespectful and after discussions the Dominion Command of the Royal Canadian Legion decided to adopt a ban on "outlaw" clubs...

In the late 40's, after WWII a lot of veterans came back missing the camaraderie of those they had worked with, and needing adrenaline fixes to keep the PTSD at bay (they called it shell shock back then).

A lot of veterans took up motorcycle riding and today, our highways are filled with veterans who ride motorcycle to ease the pain in their head and more.

A lot of these veterans have joined male only motorcycle clubs that are generally comprised of a small knit group of like minded people. They support each other just like they did when they were in combat. They have each other's back, they eat together, ride together, drink and party together. They stay to themselves for the most part, because they want to be with peers who understand, without having to say a word.

I truly understand that whole world these days and in ways I never thought possible.

It's the same world that Firefighters belong to, where peer to peer counselling is a big part of what goes on after a fire because there is a credibility the person you are talking to has when you fought a fire side by side  with them or you fed them....When I spiralled into an 8 month PTSD pit of hell in May of 2017 after the first anniversary of Fort Mac's wildfire, I couldn't afford counselling. It was the guys from Wood Buffalo that literally talked me off the ledge twice during that 8 months and I credit them with why I am still here today.

I was that close to going down the rabbit hole.

It is for that reason that many veterans choose to ride in close knit groups with a vetting period to ensure that the person they let into their fold is going to have their back when they wig out.
There really is nothing more sinister than that going on in 99% of these clubs.

The problem with a lot of riding clubs - one piece patch outfits - there is no vetting period - you buy your patch and you attend or don't attend events and rides. There are a wide variety of backgrounds and experiences but very seldom do they and the veteran truly have much in common. A lot of the time, because the supporters don't know how to handle PTSD etc., there is a large ebb and flow of membership, this is not what most veterans are looking for, they are looking for consistency, stability in an otherwise unstable world.

A person who has never experienced PTSD has no clue how to deal with the psychological traumas that some of these people have. Being around people who don't understand makes some of these veterans pull away, become anti social etc...

All three piece patches are not created equally and this is not an issue about 1% clubs like the Hells Angels or the Outlaws or support clubs like the Dirty Few.  Those clubs, they don't give a rats arse about the average rider. Individually I know some members of those clubs, and they have always treated me with consideration and respect, however, in the grand scheme of things, I am no one in their world and neither is the average rider.

I am not here to judge who is a criminal and who is not. I know that there are members of 1% clubs who don't have so much as speeding tickets because that's who they are as a person. I work hard not to generalize as generalizations lead to profiling which is what the police appear to do in our community on a regular basis.

I have two uncles who were RCMP officers and they definitely did not like the Rock Machine, the Angels, the Popeyes but...they did not deny the rest of the riders in the country their charter rights to try and nab what they deemed to be the bad guys. They did sound police work to get their "man".

Why the Royal Canadian Legion has decided to do just that is beyond me: take away the charter rights of VETERANS - the very people they are sworn to serve...

A person I know who wears the patch of a Veterans MC was asked to leave a licensed establishment for wearing his colours on date night with his wife just a few weeks ago.

He is not a criminal, his Motorcycle Club is not a gang. BUT because the waitress knows she stands to face $10K in penalties and or up to 6 months in jail for serving "outlaws"....well, she asked him to take his cut off or leave and he didn't want to do either so the cops were called.

Nice right, a veteran, eating dinner with his spouse... let that sink in...

He wasn't fighting, he wasn't disrupting the other patrons, he was having a nice dinner with his WIFE.

It's for people like him that I am standing up and putting my butt on the line with my Legion Membership.

Please people, educate yourselves about the fear mongering and what the penalties are for volunteers, waiting staff and owners...here are just a few of the penalties in the province of Alberta for serving someone you are not supposed to under the act: 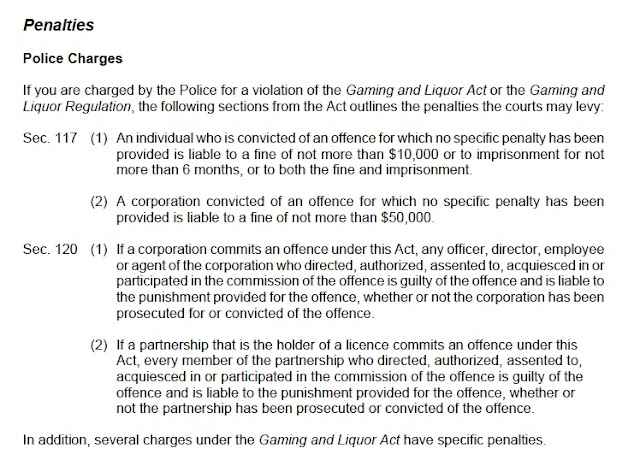 I am not fear mongering here.
These are the laws in Alberta, check it out in your province unless you live in Saskatchewan where this law does not apply because it was struck down in 2009 as unconstitutional. (http://www.cbc.ca/news/canada/saskatchewan/saskatchewan-gang-colours-law-1.3953848).

If you serve a member of a "gang" who is wearing their "colours" you can face the fines above if you get the right police officer because under the liquor control act, they are considered liquor inspectors.

So, out of the 5,000 or so Motorcycle Clubs in the world, how many are considered criminal or unwanted by the police?

And how many get tarred with that brush simply because they have asked for permission to wear a three piece patch instead of doing what the Iron Order did in the US and just stand themselves up, don't talk to the dominants and create turf wars everywhere?

Our Traditional MC's get penalized for being considerate and polite and NOT CAUSING TURF WARS, by the police who try to make it look like these guys are in bed with what the police consider to be a criminal entity.

So folks - this petition I started is not about standing up for the 1% clubs.
They can and will do that for themselves.
My assistance is not needed by them, neither is yours.

No, this is about standing up against Patchwearerphobia (Similar to Islamaphobia which is now illegal in this country).

Our Charter of Rights and Freedoms under the Constitution Act of 1982:

2. Everyone has the following fundamental freedoms:

I feel for the waitress or volunteer who tells someone they must either take off their clothing or leave.
I feel for the person whose Charter Freedoms are being stripped away.

Why is this happening?

It's a police narrative and agenda.

The Legion's general meeting is in August.
I am trying to reserve my personal decision on staying or leaving until that meeting transpires.

I love our branch president here in GP and the relationship that I have with our region 1 commander. is wonderful. I really don't want to loose that.

I do not love what the organization's command has decided.  I think they have forgotten that a Veteran is a Veteran - their clothing choices do not cancel out their service to our country.

Win some Haupy's Beaver Rub by snapping a photo of the "dad" in your life at the BBQ...
and then Like our page: CanadianMotorcycleEvents on Facebook.
(Please, rub responsibly and remember, this rub is not for use on live beavers) 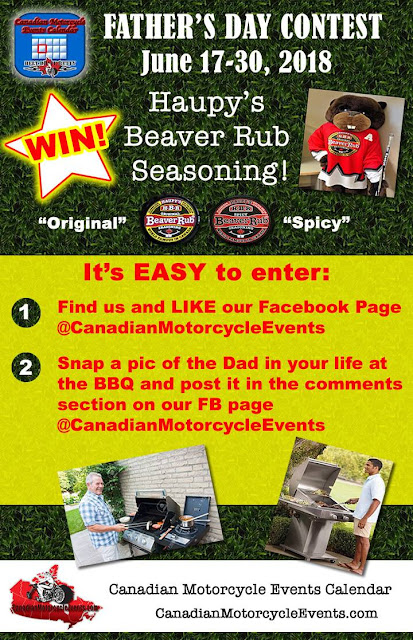