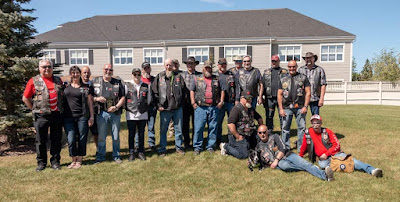 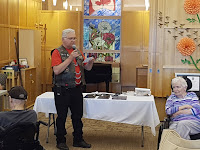 I was fortunate to attend this years 7th annual UN NATO Canada Veterans – Edmonton Crew’s Show and Shine and BBQ which was held at the Kipnes Centre for Veterans.

The Kipnes Centre is home to more than 80 veterans, with the eldest turning 101 years old this year. The centre provides 24/7 nursing care as well as other support such as physiotherapy, recreation therapy, occupational therapy, social worker, dietician, music therapy and spiritual care. The centre itself has 100 registered volunteers. This years one day event raised approximately $2540 which was generated through the registration fees for the show and shine, silent auction, 50/50 draw and the cost of the BBQ for non-residents. I must give a big hat’s off to everyone who made this event such a success, especially the two key organizers Don and Sheila. 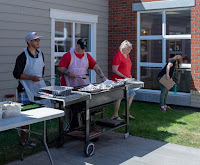 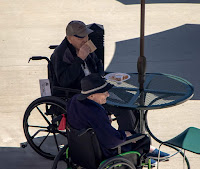 The event started with several of the members of the Edmonton Crew meeting at the Edmonton Garrison and then arriving at the same time on their motorcycles which created lots of excitement for the residents to kick off the afternoon of activities. Mother nature was good this year and the weather was terrific for enjoying a BBQ. The UN NATO Canada Edmonton crew took care of all the supplies including doing all the cooking of the burgers and Hot Dogs and offer’s the BBQ to the residents at no cost to them. The Show & Shine portion of the event had 16 bikes and 4 classic vehicles registered.

There were also two gentlemen who were offering rides to the residents in their Urals which was a giant hit.

It is great to see some of the increased mobility equipment and other purchases that the centre has been able to make over the years for the residents through these fund-raising activities. As one of the Board members of the Kipnes Centre stated at the event. “without these funds raised through these events they would not have the money to purchase these items”.

You can see and feel the appreciation from the staff, residents and their families when you look around the room when the prizes for the Show and Shine are being presented and the announcement of the additional funds generated to assist with additional purchases in the future.

This year was my second year of being able to attend this event and present a cheque to the UN NATO Canada Veterans – Edmonton Crew in support of the Kipnes Centre on behalf of the Edmonton Harley Davidson Motorcycle Community through our Calendar sales and Annual Motorcycle Fashion show. In 2018 the E.H.D.M.C. has raised over $11,000.00 for the centre.

If it wasn’t for these men and women who put their lives on the line for us we would not be enjoying the freedom we have today. I am hoping that the Edmonton Crew hold another event next year
Photos by Ray Ralph, Gerald Maximilien & Charles Issaacs 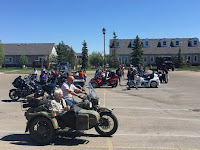