La Familia - parallels to ISIS - but tout being CHRISTIAN 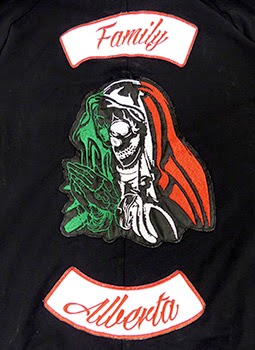 The news is full of information on 4 members of a Mexican Drug Cartel who were arrested by the ALERT team in Edmonton.

As bad as the police claim that the Hells Angels and other 1% motorcycle clubs are, the Mexican Drug Cartels are heinous and dangerous beyond most Canadian people's comprehension, according to a police spokesman on Global TV.

So who are these people?

La Familia, is based out of Michoacán in Mexico.
Michoacán is located 555 KMs south and east of Puerto Vallarta.

1) Formed in the early 80's as a vigilante group to combat kidnappings and other issues caused for the poor as a result of the drug trade.

2) In 10 short years, La Familia became aligned with the Gulf Cartel, using their paramilitary skills to protect the Gulf Cartel's interests. They were trained by Los Zetas, former Mexican commandos who had deserted their ranks to become the personal bodyguards of Osiel Cárdenas Guillén, the head of the Gulf cartel and later to become the armed division of the Gulf Cartel to protect its assets. Many of these men were highly trained by the Israeli and American special forces. Guerrilla warfare, rapid deployment, marksmanship are just a few of their skills.

3) In 2006, La Familia broke away from the Gulf Cartel and began their own enterprise and became enemies with Los Zetas as a result. La Familia aligned itself with the enemy of the Gulf Cartel - the Sinaloa Cartel. They, La Familia, became the largest supplier of methamphetamine to the US.

4) In 2009, the US federal authorities concluded a 4 year investigation into La Familia, called Project Coranado, resulting in the arrests of over 300 people, the seizure of 62 Kilos of cocain, 3.4 million dollars and a whole lot more.

5) In 2010, Los Zetas broke away from the Gulf Cartel and formed its own enterprise.
Los Zetas is a highly unstable and yet exceedingly powerful drug cartel in their own right and they aligned themselves with the enemies of the Gulf Cartel. During the civil war that erupted over the split between the Gulf Cartel and their enforcers, Los Zetas was credited with kidnappings, murders, extortion and more. The Gulf cartel, fearful of Los Zetas, aligned themselves with their old enemies, the Sinaloa Cartel and consequently La Familia as well.
Los Zetas has committed such atrocities as the massacre of 27 Guatemalan farmers, grenade attacks, a massacre of 72 migrant workers and so much more.

6) In 2010 another major split occurred that further caused chaos. After the supposed death of one of their leaders  - Nazario Moreno González, (his body has never been found) La Familia fractured into to two rival groups - La Familia and Knights Templar—Guard of Michoacán, commonly referred to as the Knights templar Cartel. In true Mexican Drug Cartel fashion, the Knights Templar Cartel is violent and their motto is “fight and die” for “the cartel.”

7) In 2011, Project Delirium resulted in the arrest of a further 220+ cartel members and seizures of cash, cocaine, heroin, and methamphetamine. Depending on which report your read, La Familia was all but decimated by the government projects and the split within their own ranks that created the Knights Templar Cartel.

La Familia cartel has been described as quasi-religious, as its leaders, Moreno González and Méndez Vargas, refer to the assassinations and beheadings done in the name of their cartel as "divine justice". (Read BBC Article)

La Familia's boss Nazario Moreno González, (a.k.a.: El Más Loco or The Craziest One) published his own 'bible'.  (Read the Telegraph Article).  According to the article -  Begin Quote "A copy of this bible seized by federal agents reveals an ideology that mixes evangelical-style self help with insurgent peasant slogans.

"It is better to die fighting head on than on your knees and humiliated; it is better to be a living dog than a dead lion," Moreno writes, mimicking the phrases of the Mexican revolutionary Emiliano Zapata.

Members of La Familia are made to abstain from drugs themselves and participate in charity work, its leaders claim. End Quote.

After the arrest in Edmonton, La Familia is obviously not dead, it appears that the Mexican and US authorities got that one wrong. La Familia is believed to also have connections in BC and Saskatchewan.

Radical thinking and ideology threatens us all.

Because of the fundamental beliefs of ISIS, and the Taliban, every Muslim who practices Islam will one day be called upon to kill infidels or die themselves, when Islam rules the world. Everything this group does, it hides behind a false religious authority - Muhammed, the false prophet. The man who subrogated his own teachings in the Q'uran when they no longer served his purpose.

Because of the fundamental beliefs of La Familia, righteous violence is to be used against anyone who betrays or crosses the cartel. Moreno Gonzalez, the "deceased" spiritual leader of La Familia and
Enrique Plancarte Solís, Servando Gómez Martínez, and Dionisio Loya Plancarte, the founders of the Knights Templar Cartel all fundamentally believe in the same religious concepts.  Remember, La Familia has its own "bible".

Radicals are radicals, it does not matter which religion/ideology it is.

Both have committed shocking beheadings (In 2006 La Familia announced its foothold in the drug trade by throwing the heads of 5 rival drug lords into the centre of a dance floor.)

La Familia has committed several mass murders of migrant workers and other innocents.
ISIS has beheaded how many foreigners now? The Taliban just murdered how many women and children in Pakistan?

Power, money and attention - that is all any of this is about and all of the people discussed in this editorial are bullies.

Sadly we will always have bullies and fanatics.

Bullies like Hitler, Mussolini, Stalin and how many hundreds of others has history revealed?

Religious fanatics like Jim Jones of the Peoples Temple who persuaded over 900 people to commit suicide and men like Charles Manson who practised Scientology and took many of his ideologies from the Process Church (Satanism), the "Family" looked at him as a guru and they committed how many murders?

ISIS, the Taliban and the Mexican Drug Cartels take radicalization and fanaticism to the same extremes and worse than any of the bullies and religious fanatics mentioned above.

The thought that La Familia and that radical, over the top religious ideology has already moved here to Alberta is scary.  Who in their right mind would think to themselves; "Oh, I am joining a gang that beheads people and massacres them when they don't believe as I do."  NO ONE in their right mind does that.

The fact that although no where can I find reference to them being a motorcycle club, yet they are sporting a 3 piece cut - well - that's scary.

With no consequences for their actions, with a feeling of isolation and emotional pain, our young, the socially disadvantaged and the mentally challenged are all fertile territory for these radical groups.

If these young people who are being radicalized felt connected, felt they belonged and were loved, valued and appreciated, they wouldn't be joining these organizations and committing the terrible acts that they do.

Parents, love your children, don't give them electronic babysitter at 1 and two years old.
Don't kill yourself working to give your children all of the toys they want.

What they really need is YOU.

This Christmas I am wishing for all parents to put their children first, not in a material sense, in a physical sense.

Hug them, spend time with them, discipline them, praise them. TEACH THEM.
If they don't feel loved, valued and validated by you, they might turn to other places to find what they seek.

And that's how I see this horrid state of affairs.