Manufacturers new models, a Ducati goes off road and a few other interesting stories

0 In the News, Product Reviews 5:58 AM
A+ A-
Print Email
The news is rather light today but what is in it is very interesting!

Ducati's new 1199 Superleggera has been revealed. It is a stripped down version of the 1199 Panigale R and the pwer to weight ratio is said to lead the chart for production motorcycles.

Honda is revealing it's new models in Milan and Tokyo, 16 in total, with 3 of those being worldwide models. Apparently the CBR250 is back on the market - it had been reported earlier that it was to be replaced by the new CBR300, but the CBR300 will only be available in limited markets.

Read the article to find out the minor changes it took to take this bike off road.
Watch the video below to see how well the TerraCorsa handled going off road.


In Sturgis SD, an early October blizzard that ravaged farmers and local businesses has caused the Sturgis Rally to divert funds that would normally go to rally charities towards the aid of their locals.
According to the article in the Republic $15,000 had been diverted.

In British Columbia, the trial for the gent accused of doing 300KPH is set to start.

Also in BC, the identity of the rider killed by logs that crushed him has been released.
Hugh Craig Roberts of West Vancouver was the victim.

In Quebec, the case of a Hells Angels member will remain in limbo for another 4 months because he had escaped from jail when a judge had stayed charges on his co-accused.

And in Queensland Australia, 8 alleged members of the Hells Angels were charged during a drug bust.
3 of them are reported to be high ranking members who have also had their motorcycles confiscated.

I hope you have a wonderful Wednesday and leave you with a few funnies shared with me by friends on Facebook and via email: 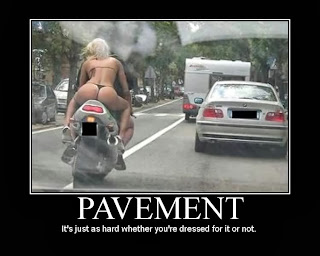 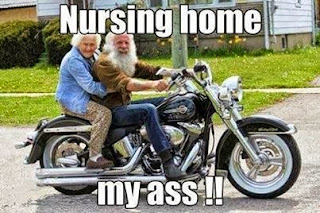 If you are blessed to be riding today, please ride like everyone around you is blind and can not see you and remember to dress for the slide and not the ride!