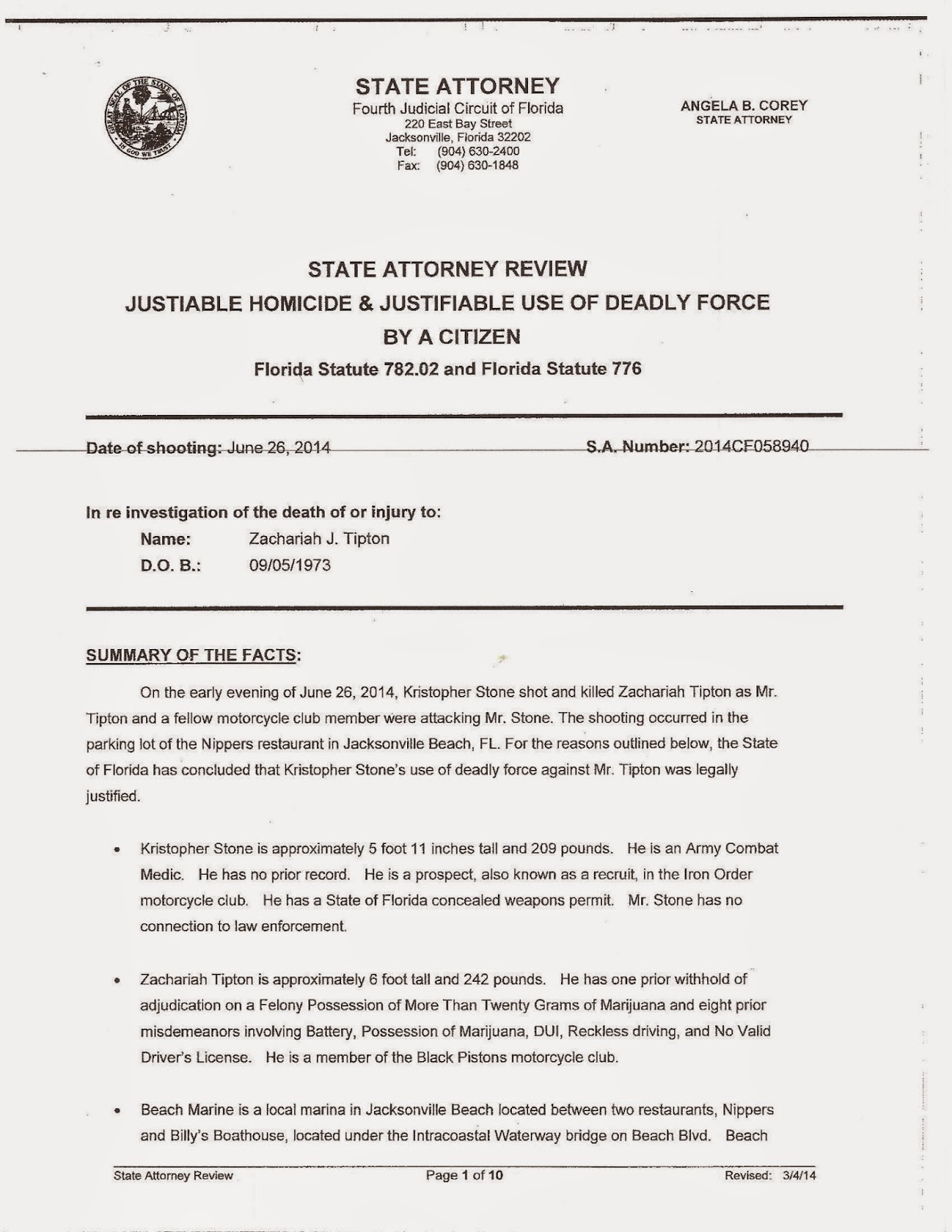 I have followed the shooting case of the Black Piston member, Zachariah Tipton, with much interest as just before this shooting took place, I had interviewed members of the Iron Order Snow City Crew near Edmonton.

Over the past several months, members of the 1% world have blasted me for reporting on the Canadian chapters and members of the IO MC because in the US,  the Iron Order is hated by the 1% clubs. 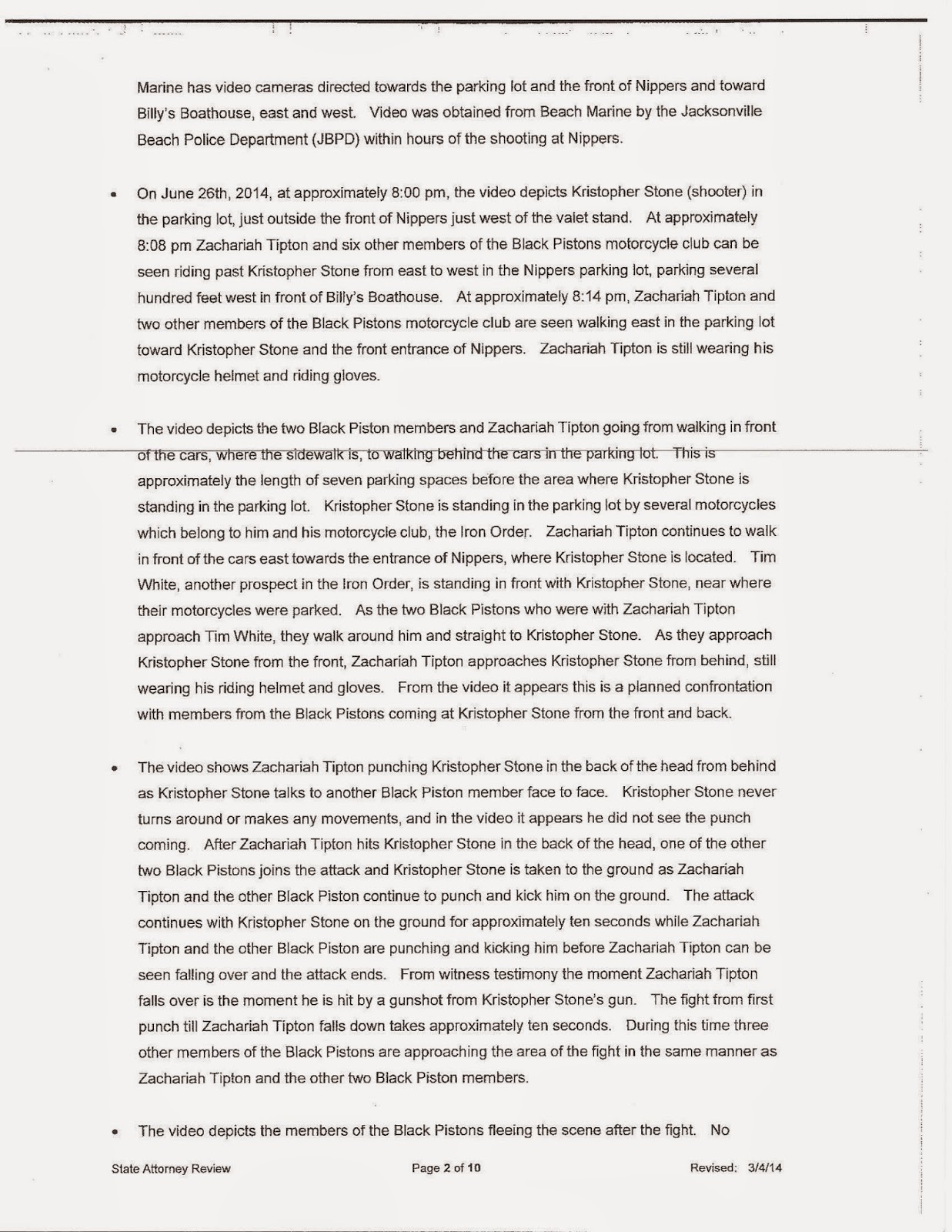 The IO MC which is a three piece outlaw club with a prospecting phase and is seen as a cop club by the 1%ers because they allow officers of various law enforcement agencies to be members.  Reportedly the 1%ers say the IO MC in the US tends to instigate trouble in an attempt to allow law enforcement a way in to the various 1% clubs.

They are also hated because they wear Black & White which are the colours of the Outlaws (AOA) of which the Black Pistons are affiliated and they do so without having gone to the dominant for approval of their cuts as COC protocols would dictate.  They did not go to the dominant because the IO does allow law enforcement members and are therefore not welcome into the Confederation of Clubs (COC).

The verdict regarding the shooting at Nippers Beach Grill in Jacksonville Beach, Florida that took place on June 26, 2014 is in. 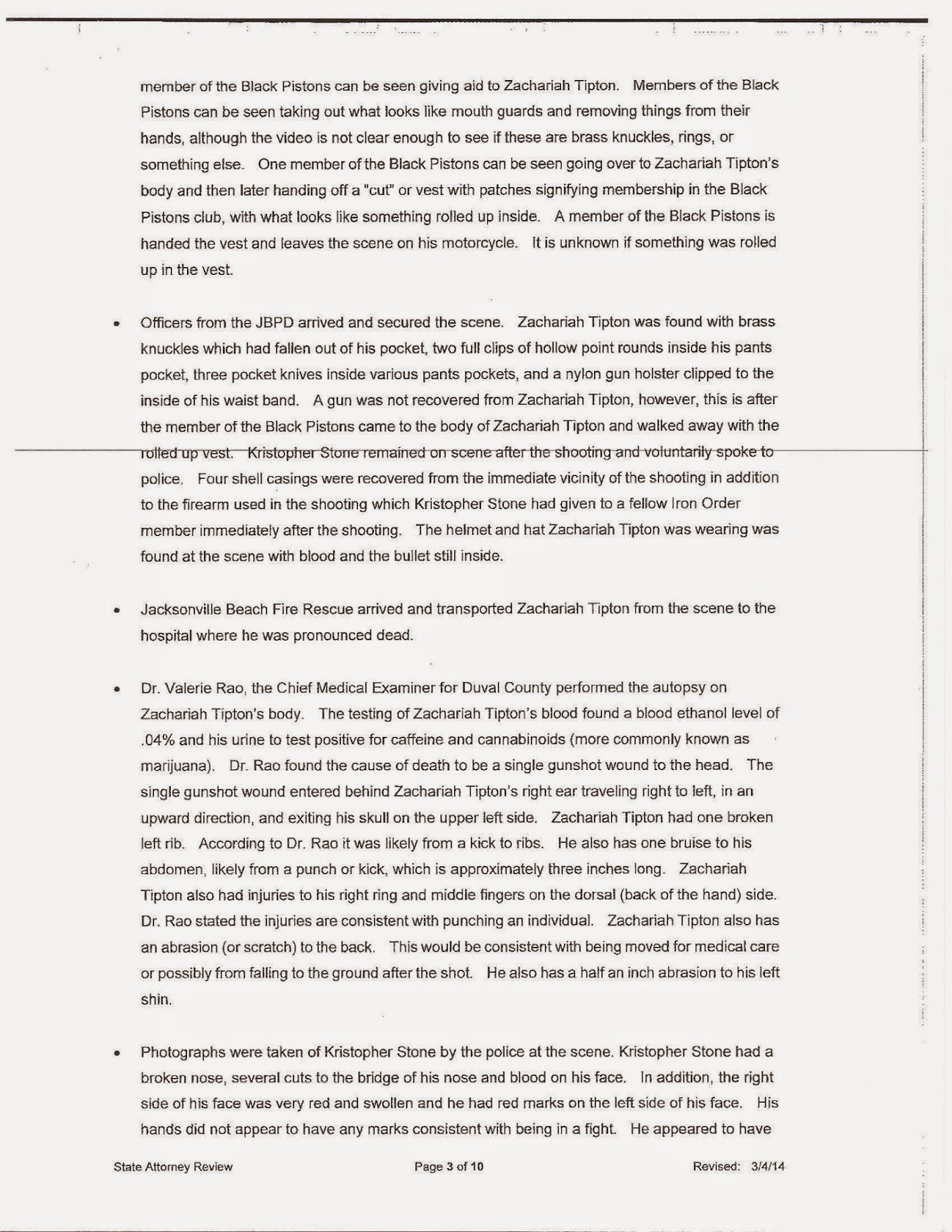 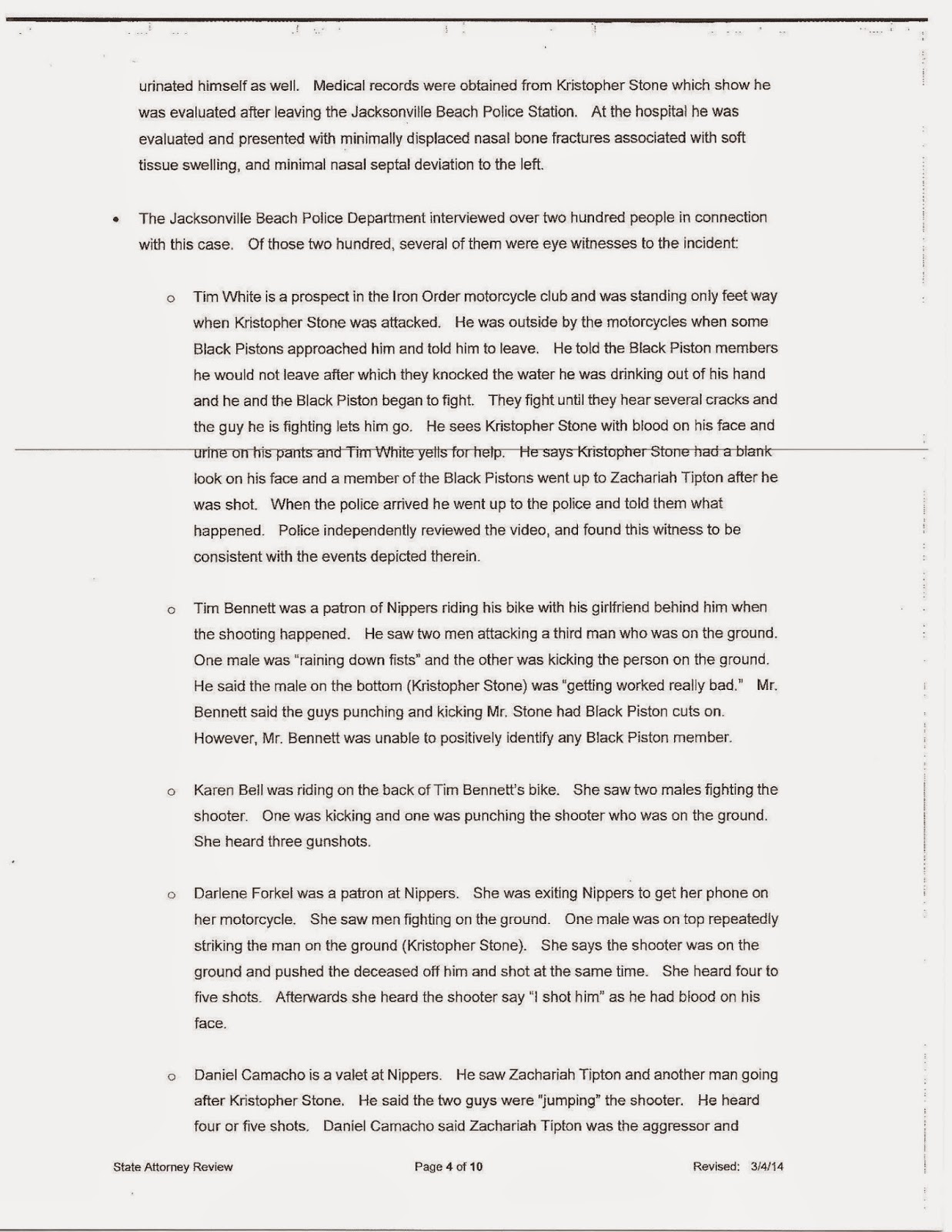 The State Attorney's office is not filing charges against the Iron Order MC prospect, Kristopher Stone, who shot and killed Zach Tipton. Justifiable homicide & justifiable use of deadly force by a citizen is the ruling.

The report is 10 pages long and it outlines the investigation into the shooting and identifies many of the witnesses who were interviewed.

I have saved the PDF into JPEG's for those who wish to read the State Attorney's findings, please watch the page numbers at the bottom of the images as Blogger makes it tough to get things in order.

There is also video to go with the report.
The 2 videos that accompany the report have been edited for time (IE - when the Black Pistons park their bikes and then walk to the Iron Order members takes about 4 minutes - that has been edited)

The first video is the TV report/Press Conference presentation: 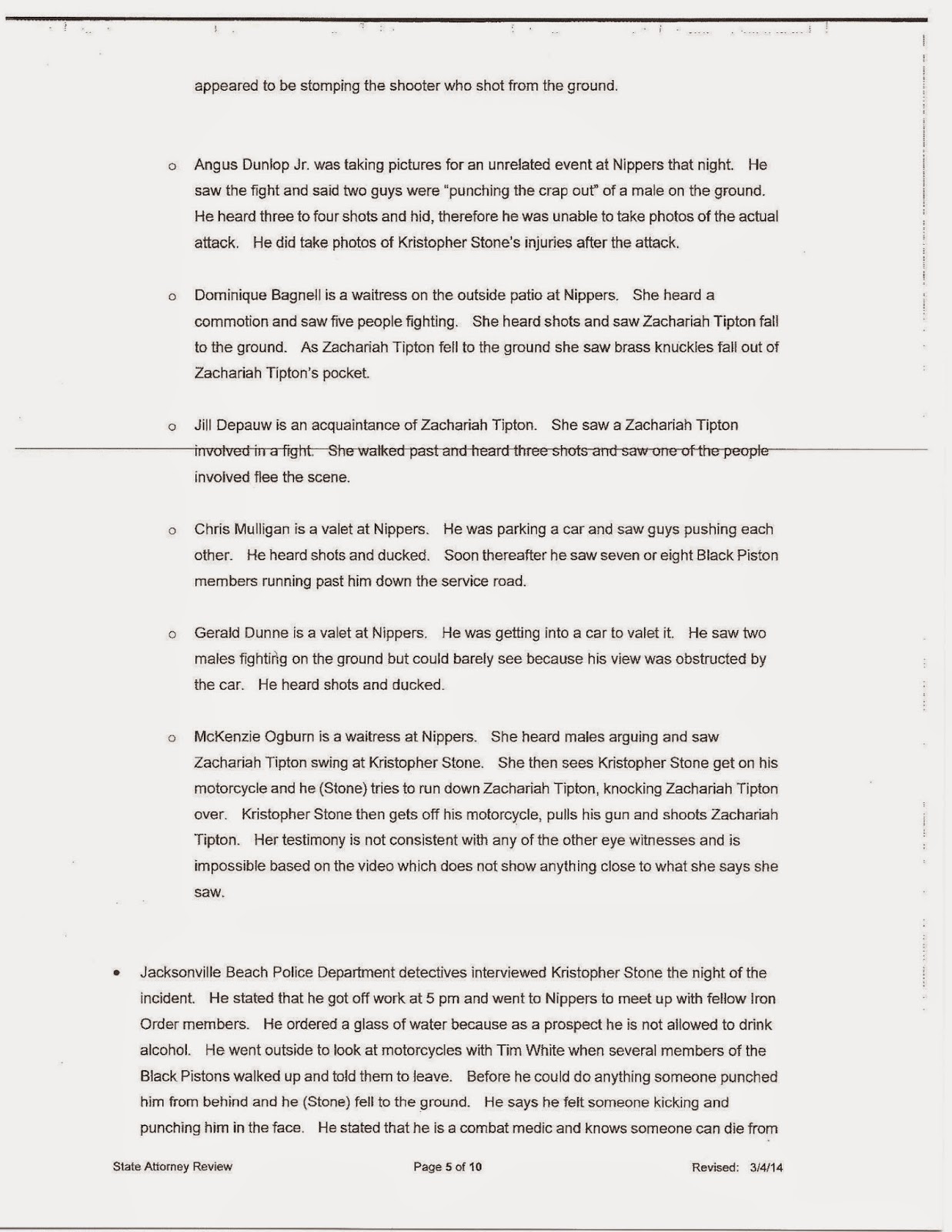 This second video is less edited: 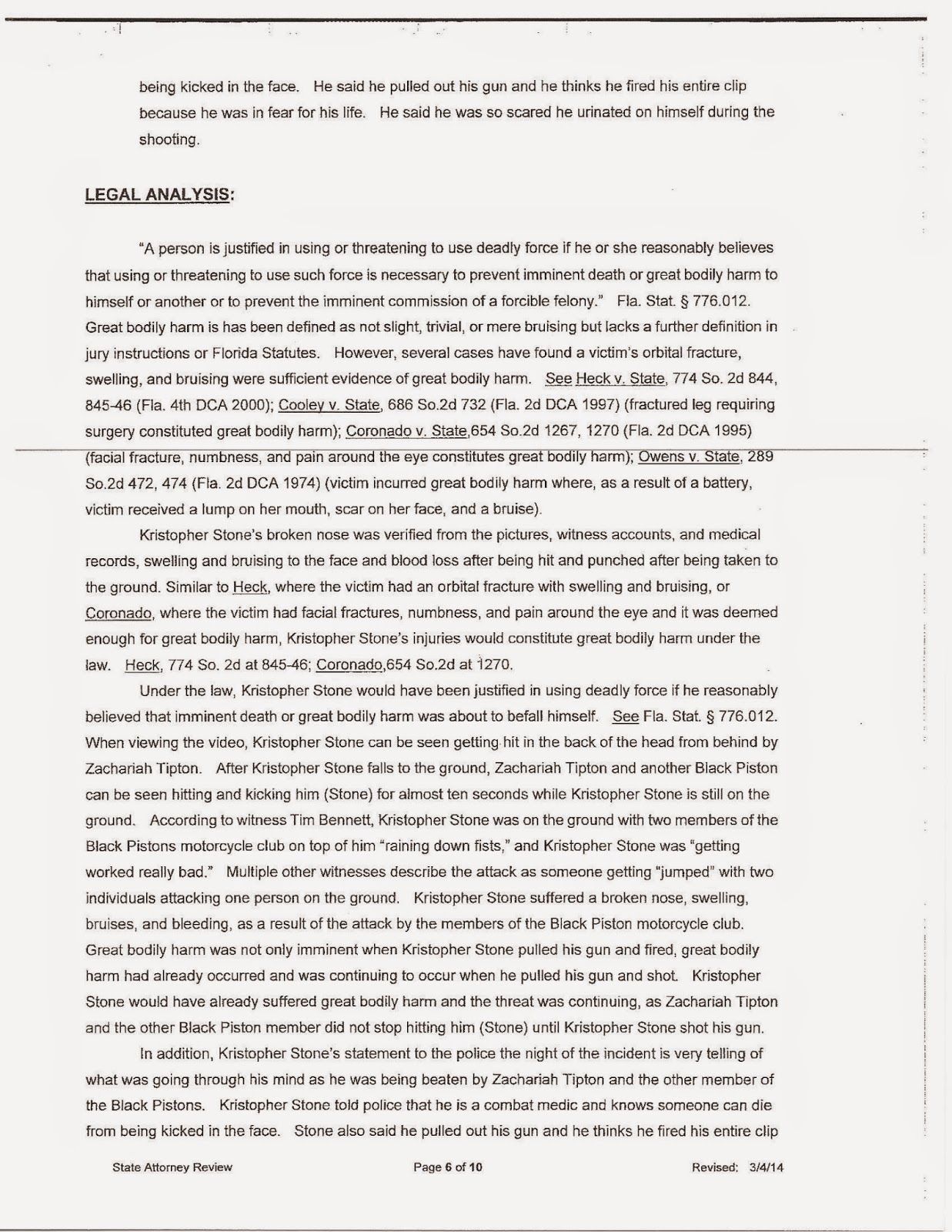 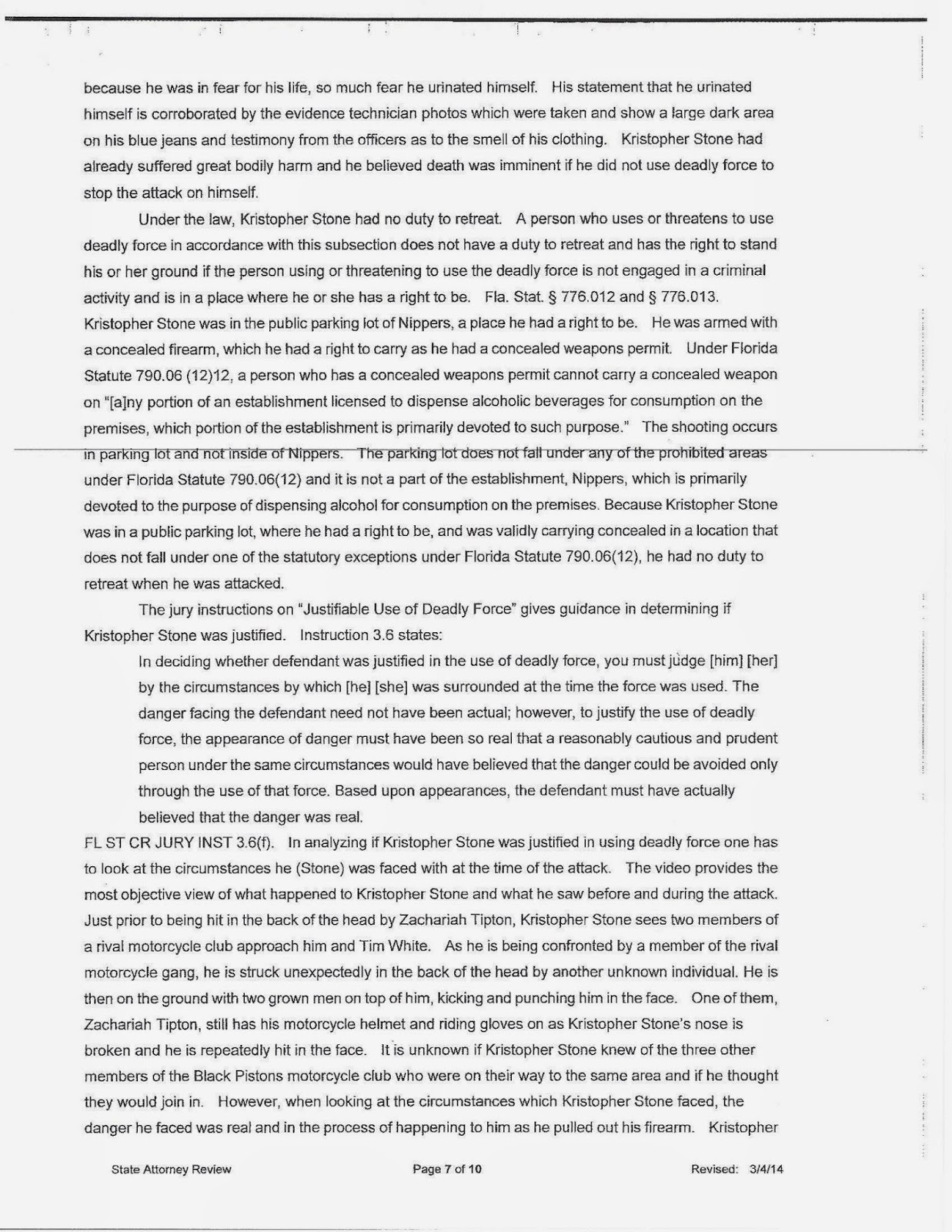 I will sum the report up for you:

The Black Pistons - 7 of them ride by members of the Iron Order MC and go park their bikes.

A few minutes later, three members of the Black Pistons walk towards the IO MC members, two from the front and one from behind.

Kris Stone was hit in the back of the head by Zachariah Tipton, while he had been talking to one of the Black Piston members who met him face on. 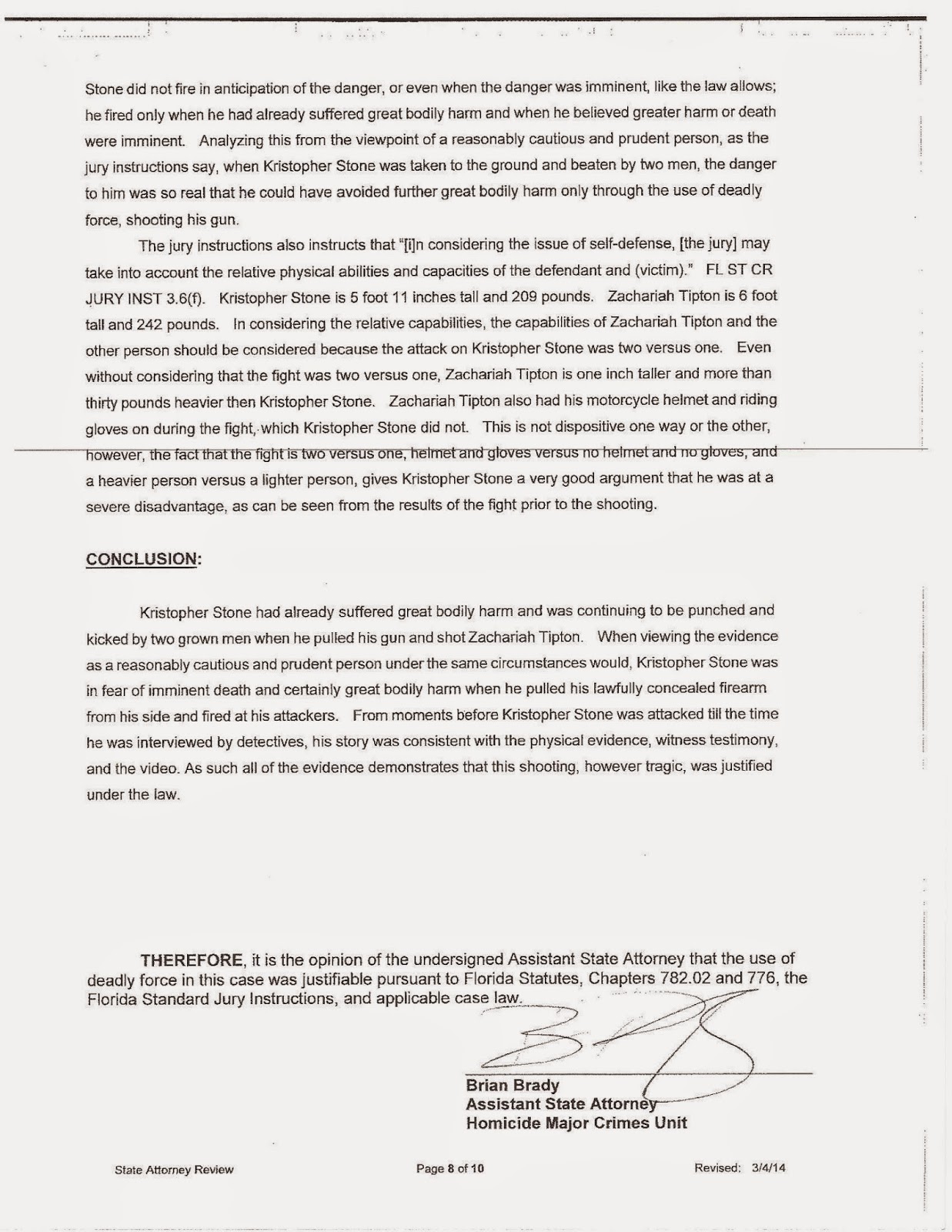 A fight ensues that lasts about 10 seconds.

During this time, other members of the Black Pistons are approaching the fight.

Kris Stone pulls his weapon and fires, killing Zachariah Tipton. The other Two Black Piston members do not provide aid to their brother, in fact they flee the immediate area.  Some members reportedly return a few minutes later to remove Zachariah's cut. 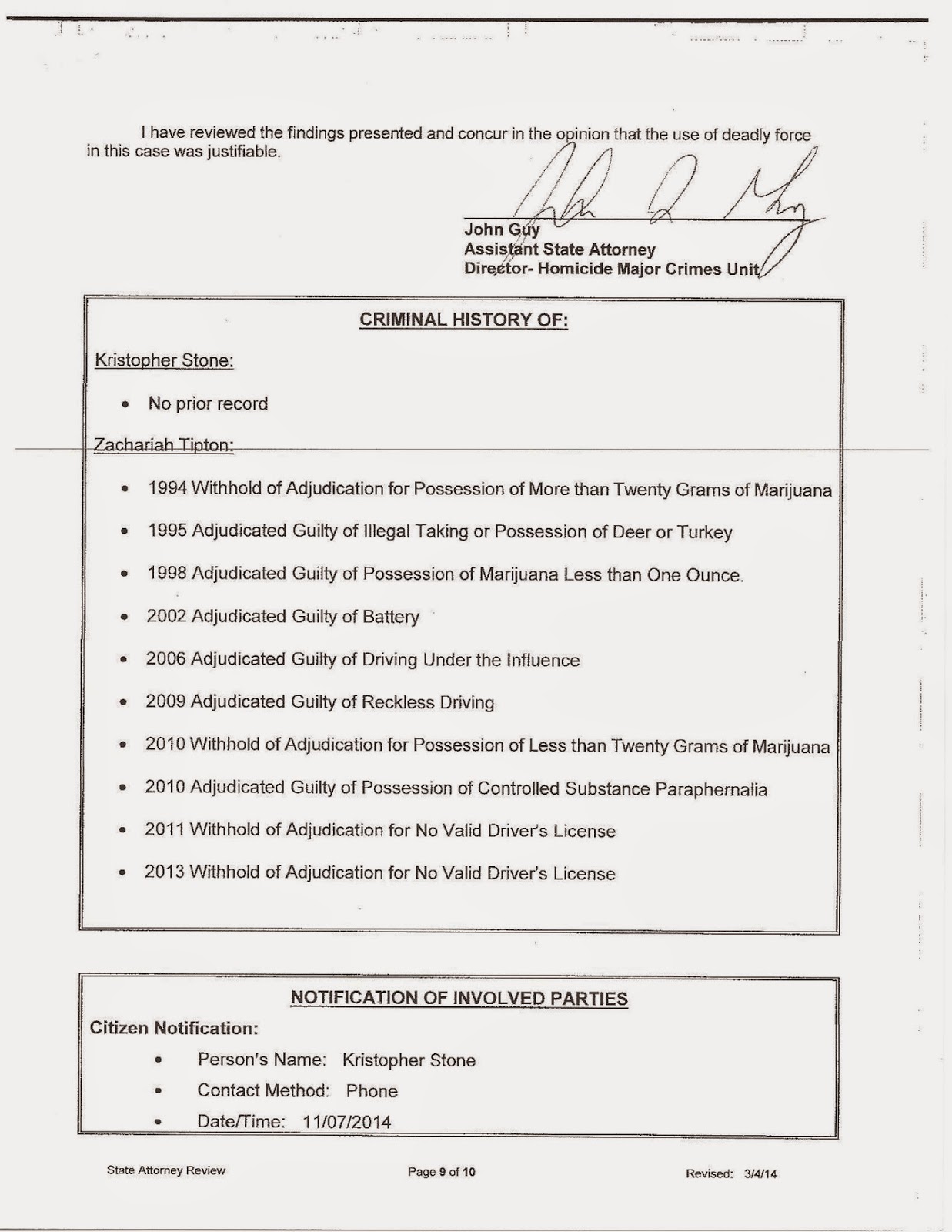 According to police, Zachariah Tipton had three knives, ammunition and a gun holster on him but his gun was not found. He also had brass knuckles and a mouth guard and was still wearing his motorcycle helmet and riding gloves. During his autopsy it was noted that his hands had injuries consistent of someone who had been throwing punches.

Also according to the report, other members of the Black Pistons were also thought to be wearing mouth guards and were seen to be removing them and either rings or brass knuckles although authorities cannot be 100% sure what they were removing.

From all indications this was a planned attack by the Black Pistons. 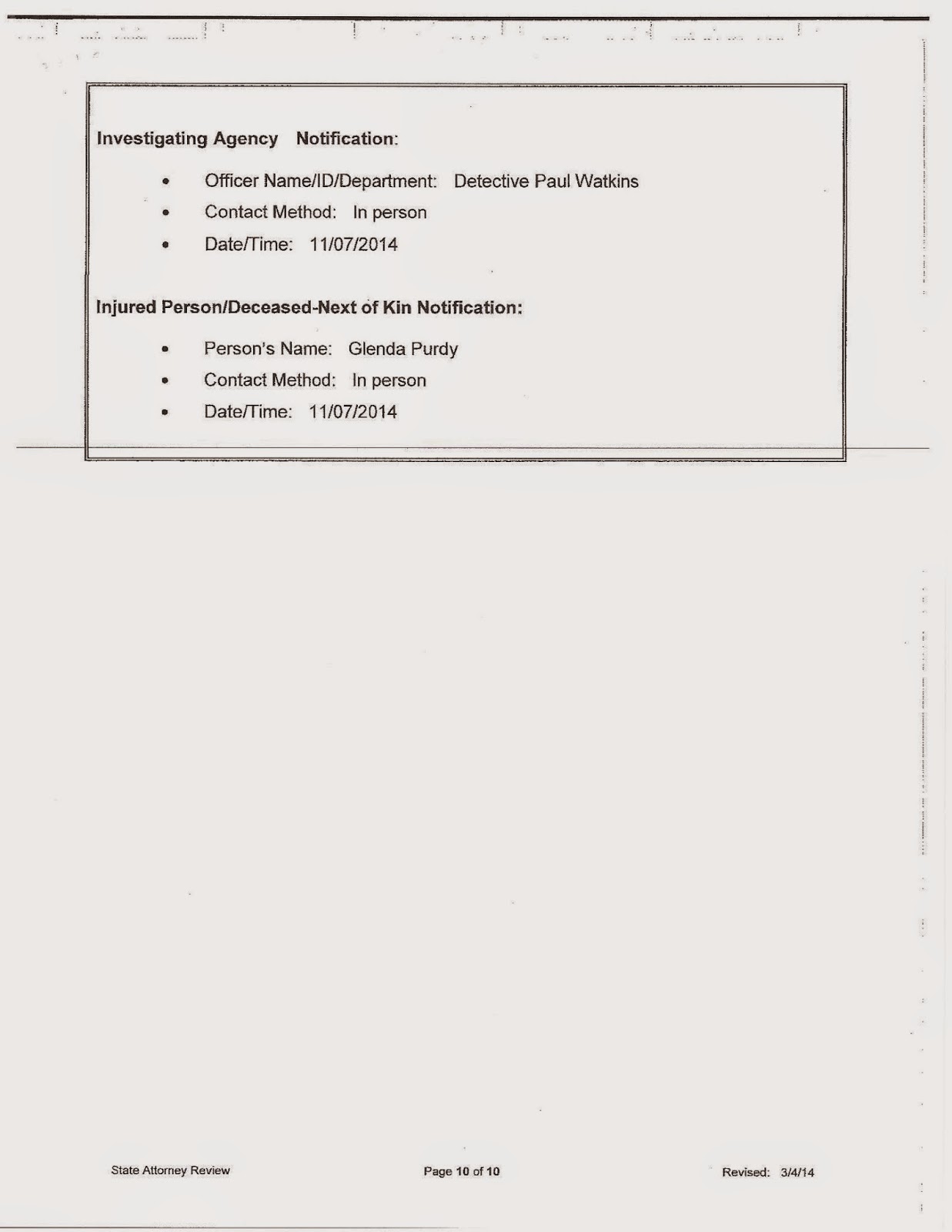 Also according to the report, Kristopher Stone, the shooter is a combat medic who has a permit to carry a concealed weapon. Mr. Stone had suffered blows and kicks to his head, his nose was broken and he had urinated himself during the attack. His hands showed no sign of having thrown punches.

In this case, the Iron Order Motorcycle Club is NOT the club who instigated the fight, it was clearly unprovoked and the Black Pistons were obviously the aggressors.

This is what it means to be a three piece patch wearing club member.


If you wear a three piece patch, although your club is reportedly a law abiding club, there will come a time when you will be called out and forced to defend your cut and your right to wear it.
Are you ready?

In this case, the aggressor dies.
As in all fights, the outcome could have been much different.

If you would like the PDF so you can read it, contact me and I'll be happy to send you a copy.

Have a fantastic Saturday and if you are blessed to be living somewhere where snow does not cover the ground, I hope you are riding!