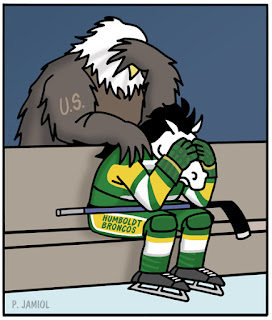 Our country just experienced a tragedy involving the Humboldt Broncos.

The Humboldt Broncos like so many hockey teams in Canada was comprised of young people from all over Western Canada.

Our good friend and the man who conceive Road Trip Rita and Flat Tail Freddy for me, Paul Jamiol (An American) sent us a beautiful condolence message in his unique style - a cartoon.

Paul is the author of the children's book series Bikers Are Animals and as a cartoonist, he has brought the grief we all feel, home.

There are no words that can possibly express the grief that our country and all of the families affected are feeling.

I don't think there is a truck driver alive who isn't feeling the horrendous grief or pain that the Calgary  truck driver must be feeling. I am pretty sure he/she never got up that fateful morning thinking they would kill 15 and injure over a dozen more.

My mind can not comprehend what that poor driver has to be thinking and living with in the prison of his/her mind.

I know that for us here at Belt Drive Betty Media, it's been really hard to even think of promoting Canada's MOST Rider Friendly Community Contest  given the sadness that everyone is dealing with.

So with that in mind, we are going to extend the voting out by one week, hopefully it will allow everyone a little bit of time to deal with everything that faces them right now. It means our contest will end one week later than originally scheduled.

Sending a heartfelt hug to all who are affected by this unthinkable tragedy. 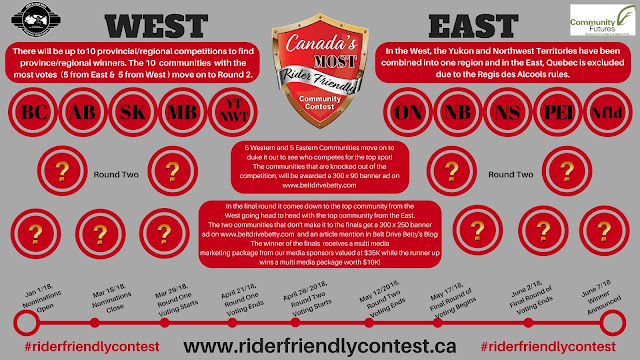