I wanted to be pro active and get them done early so that my bike would be ready for filming of my TV Show, "Ride Like a Local" on Eastlink TV and for the "Biker's United in Remembrance" Conga.

I gave Jeff Balmes my logo files in the right format - Adobe Illustrator & high resolution pdf.
He had my company's font.
He had my chopper chick and he had my maple leaf.  See the photo below.

I gave him clear instructions as to what I wanted,  in fact I spent a morning showing him exactly what I wanted...

My chopper chick with the tribal maple leaf in flames for the fairing.

On my tanks were to be three flaming maple leafs each getting progressively smaller and the in military stencil - "Belt Drive Betty" in ghost flames.

On my saddlebags and tour pack were to be three flaming maple leafs all the same size with "www.beltdrivebetty.com" again in military stencil, in ghost flames running through the maple leafs.

I was clear, supplied good foundation art and I waited.
And I waited.

No basic drawings were sent to me as to the concept...
No photos were forth coming.
When I asked for photos or when the tins would be ready - I got told, oh you'll be happy.

In February I had a photo shoot arranged with me and my bike - I had to cancel that - why?
No tins back from the painter.

Then I had another photo shoot scheduled and it got cancelled because - again - I had no tins.

I got excuse after excuse as to why I couldn't have photos at least - always being told, "I am working on it." Hell I even got told once that they had been shipped DHL and another time that they had been sent with a friend of his.  But when they never showed up and I called, I got the run around and a hundred excuses.

Now one of the reasons I took the tins to Jeff to be painted is he is a master at true flame, but come to find out that not only did Jeff not do the work, he had a 23 year old do it.
Nothing against the young man or his talent, which I think - once he has some time on a gun - will be HUGE...But - that is not who was supposed to do the work.

I finally got this photo TODAY - keep in mind, we begin filming here in Grande Prairie on Saturday and I need my tins by Thursday so that I can ride my own bike... 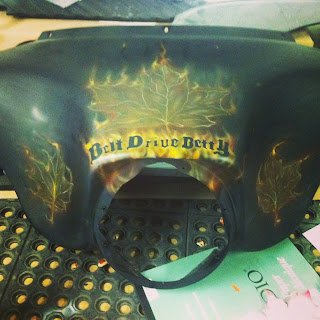 I am so disappointed. What I see here is uneven lettering that is in no way shape or form military stencil.  The maple leaf is not representative of the maple leaf that comprises a good chunk of my logo and he had not even begun on the chopper or the chopper chick.

This is what it looked like at 2 pm TODAY. After 7 months, this is all that is done.

The tanks, saddlebags and tour pack are completely untouched other than for base black.
Now keep in mind that I never once changed my mind - I knew EXACTLY what I wanted and that has never changed since day 1.

This is not it.

I have asked them to sand it down and paint it black, clear coat it and get the tins back to me.
I start filming THIS SATURDAY.  (Jeff has known all along about everyone of my deadlines.)

My husband needs at least a day to put it together and the clear needs some time to cure.

Jeff was going to be getting some prime advertising on my TV show, a feature in the paper and some other advertising in our phone book and newspaper. He had already benefited from some advertising I had done for him before...about $1,000 worth that we had agreed would go towards a future paint job - this paint job...

I am simply stunned that someone would do this to their own business - let's face it my bike is going to be a rolling billboard for over 26,000 KMS this summer as I go across this country riding with hundreds and hopefully thousands of other riders as we film for "Ride like a Local" and raise funds for the charities attached to my Conga - and the exposure value compared to the cost of the paint job - well -  a top end paint job will cost $10 grand and more from a guy like Blake at Cross-Eyed - one that is front to back, top to bottom, graphics.

My newspaper, web site and social media network reach upward of 150,000 people per month.
Then there are the articles I write for the Northern Horizon and East Coat Biker - another 130,000 reached bi-monthly. I am not sure how far TV will extend my reach, but suffice it to say that over 11 years of hard work, I have built up a communications network of somewhere around 250,000 - 300,000 people. And his artwork would have been on my bike for a whole season, maybe two...and in a guaranteed 13 episodes on TV and in countless articles...

I estimate the value of that kind of advertising and publicity is well over $65,000.

Is this kind of marketing opportunity not one you would put every effort into?
Am I wrong in thinking that an artist would appreciate the chance to have their art promoted extensively?

This was supposed to be a win - win situation - Jeff and his business would get the advertising and exposure they needed and my bike would have had a new look.

Instead there is a 10 year friendship/working relationship up in flames.


Who does this to themselves?

Who puts someone like me in this position where I have to tell you why my poor bike...my girl - "Black Betty" did not get the 100,000 KM facelift she so richly deserves. The one I have been talking about for months.


I am stunned to say the least.

So today, I did some playing around with photoshop - below - now bear in mind that I am NOOOO artist but I am investigating having Speedpro Signs here in Grande Prairie wrap my bike and their layout artist and I have been talking about what I want.

There is no time left to go to another air brusher, not if I am going to make it to all of the events that I am supposed to be filming at in May and June and then the Conga beginning June 18th.

It won't be everything I wanted, but at least the art will be far more representative of my brand - my logo...my business. I wanted the flames licking off the ends of the leaf, but I don't know how to make that happen. 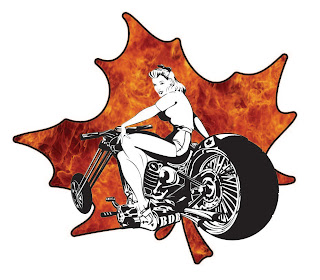 This is what the maple leaf would look like on black... 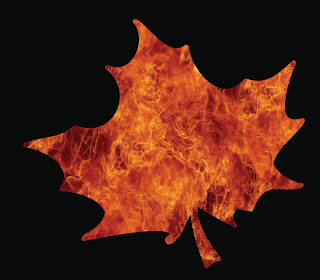 And who knows - "Black Betty" may have to stay gloss black for this season - we shall see.

I am a disappointed human being who has learned a valuable lesson - when something doesn't feel right, it probably isn't and I should have listened to my gut, months ago and drove to Kamloops and gotten my tins.  I should not have listened to the advice of others about dealing with artists and to have patience.

I should have done what I felt was right back in February and gone and gotten them.

So a little advice from me to you with love...follow your gut - ALWAYS and if something starts feeling like a jerk around, it probably is.

Don't ask me why Jeff has put me in this situation, one where in I have to tell you all, that this exciting paint job that I have been waiting on has turned out to be a flame out...and I get to share this disappointing news with all of you...

I am so sad and disappointed that there are no words to express the pain I feel.

I never imagined that I would be sharing anything but utter excitement and joy.

Oh well - that my friends is life...time to move on and shake it off.

This too shall pass.

Have a good evening everyone, I am going to borrow my husband's Road King and go for a brain clearer...cause, yeah, I have no bike of my own to ride now and who knows if I will even get my tins back - I have NO IDEA and tonight I am beyond caring.

Tomorrow I will deal with whether or not I get my tins back and what a plan B could be if he decides to make this more painful than it already is.

One way or another the Conga will go on, the charities I have chosen to support will not be let down by me - if I have to go get a loan to buy new skins and get her painted - I will...this situation has a solution and I will find it.  Just not tonight...