A Gag Order on ME & YOU, The Riding Community

1 Lawsuit, Motorcycle Community, Sturgis North 6:27 AM
A+ A-
Print Email
Two days ago I received, along with the other 6 defendants in the Lawsuit launched by Sturgis North, Ray Sasseville & Joan Hansen, a letter from their attorney that in effect offers to drop the entire lawsuit against 6 of the defendants if they agree to waive costs. If they agree the only caveat is that they are not discuss the settlement.

I then got a special letter directed at me only, with an offer to settle that is much different from that of the other defendants.  The notice starts on the bottom of one page and spills over the another hence why it is here in two images: If I understand their notice, they are saying that if I shut up and never utter another word about this group of people and the event, if I remove every instance of mention of the above group and event off of my website and out of my newspaper and blog, then they will drop their lawsuit.

BUT, if I publish ANYTHING about the event or the people - directly or indirectly, they want me to agree to pay them $250,000.

So what that means is that we would not be allowed to print letters to the editor or link to any news articles about the event or people noted in the suit.

This is effectively A Gag Order on ME & YOU, The Riding Community


As the Editor of a newspaper how in the H E Double Hockey Sticks do they think I would agree to that?

If I fail to agree to their demands they are going to apply to the courts for a cease and desist order that will gag me AND YOU from speaking of them or the event until we go to court as I will not be allowed to publish letters to the editor that people send in if it refers to the above mentioned parties! 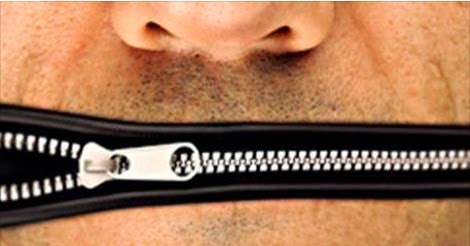 Now the other defendants in this suit would, in my humble opinion, be crazy not to take the offer given to them. After all why should they throw good money after bad?  There is no gag order on them other than not to discuss the settlement and although I am no lawyer, I really see no reason why they shouldn't accept. And they have.

Here is a screen shot of page one of the letter to me - because of the way the text flows on the page I am having to do this in 2 screen shots. 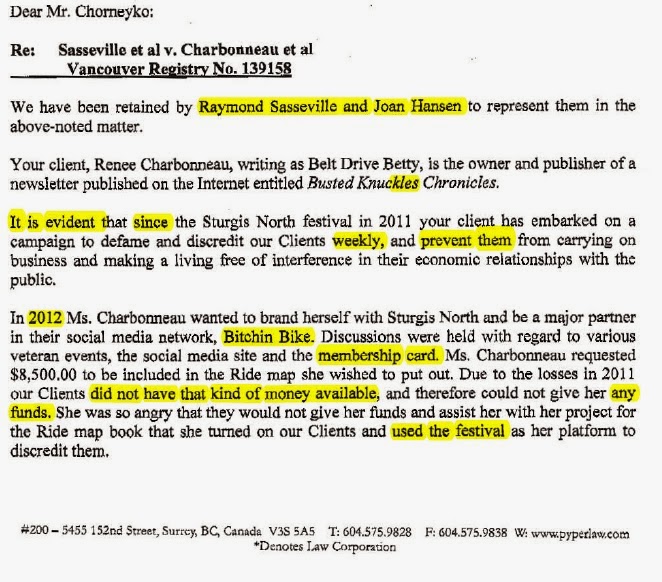 In January of 2012 at a meeting with Ray, Joan and a couple of others, held after the Vancouver Motorcycle Show we discussed ideas for improving and promoting Sturgis North.  I offered them a Ride Map in my phone book and showed them how they could cover the costs - it is the same proposal I deliver to many a tourism consortia.

Ray wanted me to bring my Rider Friendly business partners into his Bitchin Bike Social network to give them more exposure.  I was willing to look at it but at the time Ali and I were only a few weeks away from status walls and other tools being available on our own web site.  The deal Ray had offered at an earlier meeting in Calgary ended up being far different at the second meeting and I expressed that since people couldn't seem to remember what they said, I'd bring a tape recorder to the next meeting.

I received a Sturgis North Leather Jacket and an Alive Drive for Bitchin Bike at that Vancouver meeting, with Ray welcoming me to their team.  I told Ray that I needed to do my due diligence before I agreed to become part of anything.

I was later told in an email that because they owed their printer money the best way for them to recover good faith with him was to allow him to sell ads in and print their new ride guide - fair enough. I already had enough partners for a regional ride map, so if they didn't want to be involved no problem. As a sales person, I face rejection and acceptance everyday - it's nothing new.

I have all of the emails that detail the discussions and they are on their way to my lawyer.

I also produced the Sturgis North Newsletter for them in the newspaper in 2012 - so I am unsure how my "barrage of lies and half truths started when they were unable to provide me with a social media partnership and the requested $8,500" in 2012 - BEFORE the event.

I have posted links here to the four posts about my attendance at the 2012 event, the first one talks about the police presence and how it destroyed the Great Canadian Bike Rally and was even more oppressive at Sturgis North 2012.

The second article deals with my impressions of the events...

The third article involved my impressions of the 2012 event in Vernon and even in it I give the organizers the benefit of the doubt. I disseminated the event and identified everything that I saw as a challenge that would need to be addressed before a 2013 event could be contemplated.

It is not until August 17th 2012  after speaking with the BC Liquor Board that I started delving into the conduct of Ray Sasseville and why the Liquor Board and RCMP had placed such hard sanctions against the riding community.
http://beltdrivebetty.blogspot.ca/2012/08/some-hard-truths-about-travesty-called.html

Then on November 9th - 2012, I wrote about some of the things I was learning about event organizer Ray Sasseville:
http://beltdrivebetty.blogspot.ca/2012/11/sturgis-north-2013-will-you-support-it.html

I will be fighting Ray, Joan and Sturgis North in court as the only defendant.

I REFUSE to be gagged by these people. I refuse to allow them to attempt to gag the riding community either  - $250,000 if I print anything one of you says - get real...

Watch for a major fundraising auction on Facebook that will start very soon, because this IS going to be expensive and I intend to have the money to see it through and have my day in court. 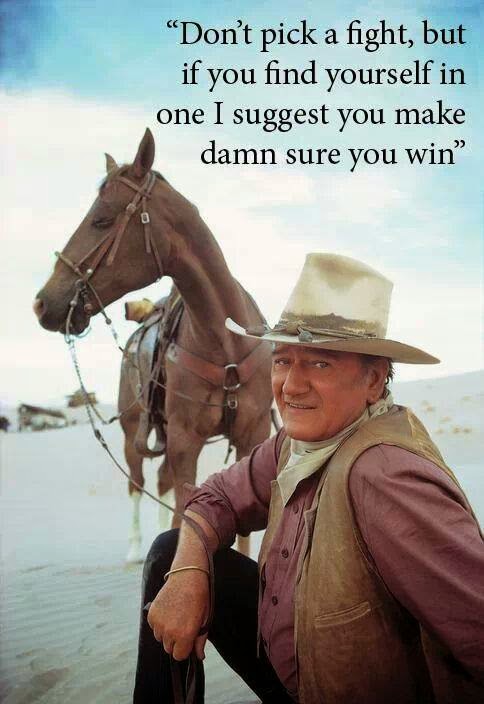 I didn't pick this fight, but like John says - I intend to win it.

If you are blessed enough to be riding today, please ride like everyone around you is blind and cannot see you.