0 Motorcycle Community, Rider Down, Sturgis North 4:53 AM
A+ A-
Print Email
There have been 3 recent crashes in Ontario involving single motorcycles, leaving 2 people dead and one severely injured and one other crash that sees two riders with serious but non life threatening injuries.

Leamington OPP have named the man who died in a single motorcycle crash in their county as Christopher Harmston, 39 of Leamington.

The Brant County OPP have identified the man who died on Sunday in a single motorcycle crash as Kenneth Rattie, 51, of Brant County.

The third single motorcycle crash has the rider in hospital with severe injuries.

The fourth crash happened in Barrie leaving two injured riders and an 80 year old man has been charged.


My heart goes out to the families and friends of all involved and I am begging you riders to PLEASE, PLEASE, ride like everyone around you is blind and cannot see you.

We don't know what happened in the three single motorcycle crashes, but I encourage you all to ensure your bike is mechanically ready (neck bearings, wheel bearings and tires and their pressures should all be checked before you head out for that first rip of the season.)

I also urge every rider to please slow down, frost heaves, pot holes and other dangers like gravel, sand, railroad tracks and man hole covers can cause you to loose control of your bike.

PLEASE, be safe out there.

In other news, I have come to a decision regarding the Sturgis North Lawsuit after a lengthy talk with my husband yesterday - he wants me to stand my ground and fight. He has promised to try some different things to help him handle the stress better and I am feeling a lot better about the whole thing!

He says that if he ends up in a full blown attack, he does and he will deal with it as long as I am there to support him the way he supports me...Belly Buttons and Lint...that's what we are and we belong together!

So - bring it on Sturgis North, because we are going to prove that everything I have said, written and feel about the organizers is true and that there has been no slander, no libel!

We have a fundraiser coming up to help me raise the money I need to continue the fight and I sure hope some of you can join us on May 24th at Blackjack's Roadhouse in Nisku: 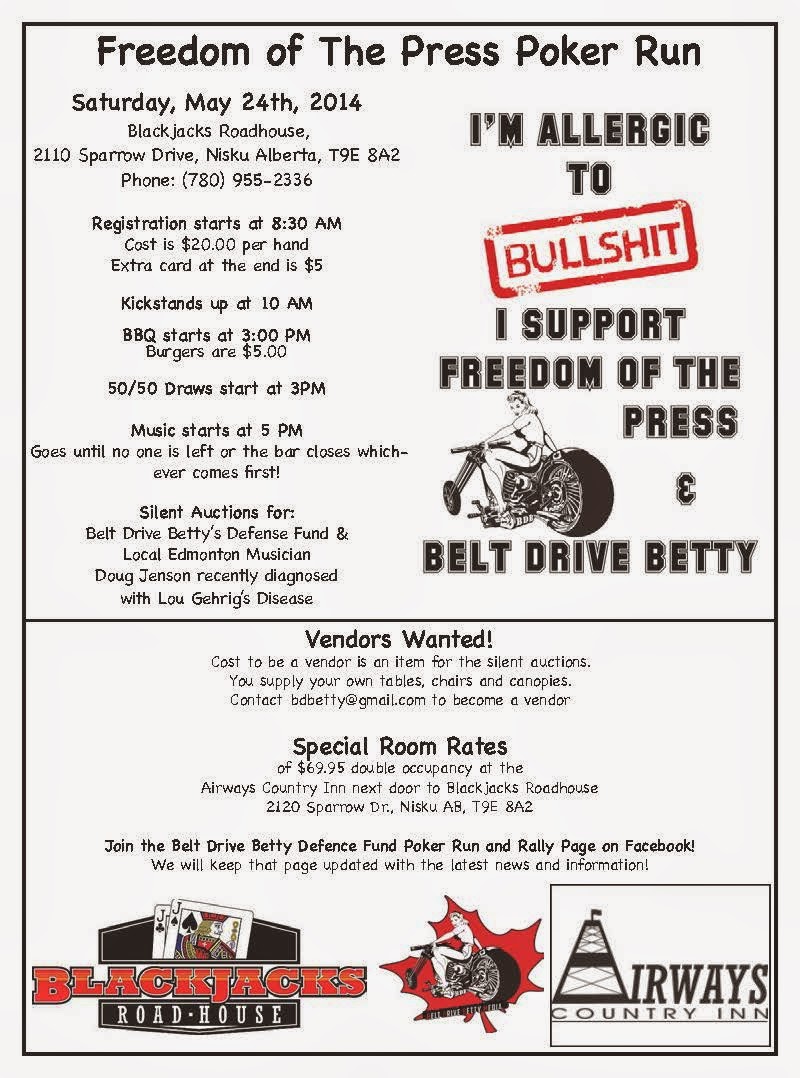 Have a great day everyone...