Behaviour or Race & why Black Bike Week is under the spotlight 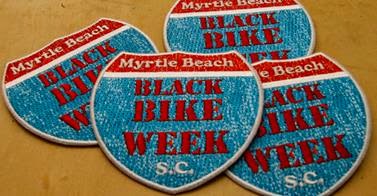 Atlantic Beach SC is in the spotlight again as Atlantic Beach Bikefest, a.k.a Black Bike Week apparently had lots of problems again this year and Governor Haley is planning on shutting it down.

After three murders and an increase in stolen motorcycles, traffic tickets and fatalities, the Governor has had enough.


According to the Last Refuge, in a 24 hour period ten people were shot, three fatally during the Atlantic Beach Bikefest a.k.a Black Bike Week. This year the Rough Ryders "gang" were evicted from the event because there were too many members present apparently.

An article from Top Conservative News shows three different videos that show some of what went on and those videos may shed some light on why there is a differentiation between the Myrtle Beach Bike Week event that is held the week before Black Bike Week.

The Mayor of Atlantic Beach SC is none too happy.
He feels his relatively peaceful and quiet city is getting a bad rap over the situation.
AND YET - the Mayor and the town had worked hard to increase the amount of vendors for Black Bike Week by dropping vendor fees and they were collecting economic data on what the event brings to the city.

The Atlantic Beach Bikefest starts on the heels of the Myrtle Beach Bike Week and has over the years been surrounded by controversy and the NAACP, has been a watch dog to ensure that there is no discrimination of Colored people.  They have successfully sued restaurants and other businesses for Civil Rights Act violations when those owners wanted to close their doors only during this particular week.

In past years hoteliers have complained of their rooms being trashed during Black Bike Week and restauranteurs have complained of high numbers of dining and dashing, others see extreme reductions in their tills over that week and the whole racial issue flares its ugly head time and again.

I wonder why the city of Atlantic Beach decided to court larger crowds, extend the hours and lower vendor fees? This event has been fraught with issues and challenges in the past, did they think larger numbers would reduce that?

Perhaps faced with a $127,000 policing bill they needed the revenue. Perhaps they were willing to see the event grow because it could benefit the region.  Perhaps they did so to prove to the NAACP that there is NO discrimination.  Whatever the reason, it backfired.
3 people are dead. 7 are injured and a city and its residents are concerned and rightly so.

Although the Governor seems to be talking tough, the city seems to know that they have to prepare for Black Bike Week because no matter what, riders will still show up in their town, official event or not.

For there to be no tension over this event, I suggest that the organizers of Black Bike Week and its supporters and attendees look at how participants are behaving.

If the same behaviours were exhibited at a non racial - meaning everyone welcome - events, do you not think businesses would close up for the event?

If the same behaviours were exhibited at a non racial - meaning everyone welcome - event, do you not think the people who live in and pay taxes to the city would not be up in arms?

There have been issues in the past in Sturgis SD, a non racial - everyone welcome - event.

Those incidents, like the shooting in Custer State Park in 2008, have seen no colours bylaws stepped up in the licensed establishments, there have been thoughtless boobs who have to do that burn out or otherwise show off and ruin it for others, there have been incidents of lewd conduct that have resulted in charges.

The issue at any large gathering of people that involves alcohol is BEHAVIOUR, CONDUCT and at non racial events, those behaviours are not tolerated. Police presence increases with the size of the event and the history of the event and its attendees conduct.

Laws are in place to protect the innocent bystander, the citizen and tax payer and the non motorcycling visitor of the city/region hosting an event, from the choices of STUPID - SELFISH PEOPLE no matter WHAT RACE, WHAT RELIGION, WHAT GENDER.

I know this much, being politically correct, being fearful of the NAACP and their successes with Civil Rights lawsuits is going to make a bad situation worse.

Be you Black, White, Green, Purple, Red, Orange...if you conduct yourselves like asshats, don't pull the racial card to defend your behaviour.

Suck it up - if you behaved badly, take your lumps.  For those who were there to have a good time, peaceably, do you enjoy the intense scrutiny the behaviours of SOME of your fellow riders has brought down on you?

Most of us "white" people or people who don't give a shit about race, feel the EXACT SAME about those in our circles who conduct themselves like asshats and bring on extreme costs, extreme presence of police etc.

And that would be the rest of us, Black, White, Green, Purple, RED or ORANGE, that go to events to meet people, spend time with our friends, take in great riding and sight seeing, good music and have no need to show off, be rude or crude or destroy shit.

Having fun is one thing.

If you are a visitor to a community who is hosting an event, WHY destroy the relationships that the businesses, the riders, the police and the hosting community need to have with conduct that is so over the top?

People are the problem. People, who when they consume large amounts of alcohol and or consume various narcotics too often become rude, disrespectful, unsafe and sometimes violent. People with hidden agendas and egos the size of Texas or those who think they are invincible...

Be it football games, racing events, music festivals, hockey games, protests or any other large gathering of people, there will always be those who have to destroy the good time/the good purpose for the many, to satisfy their own selfish desires.

It is BEHAVIOUR that is the issue, not RACE but BEHAVIOUR.

Can anyone else see that, or is it just me?

According to an article in the Guardian Newspaper today, the RCMP in Prince Edward Island is set to start targeting aggressive riders, offensive motorcycle noise, drugs and outlaw motorcycle gangs. Begin Quote: They will also conduct enforcement initiatives targeting aggressive drivers with a focus on motorcycles and offensive noise during the motorcycle season. End Quote
Begin Quote: There will also be increased intelligence sharing, with a focus on drugs and outlaw motorcycle groups. End Quote

Out of Montreal today is a story in the Gazette about a woman who stopped suddenly on the highway to avoid hitting a family of ducks and subsequently a father and daughter on a motorcycle died.
The driver, Emma Czornobaj, 25, of Châteauguay is facing 4 charges, 2 of criminal negligence and 2 of dangerous driving causing death. It took over a year for her to be charged. If convicted of criminal negligence she faces life in prison and if convicted of dangerous driving causing death she faces 14 years in prison.

The Vancouver Sun is reporting that the Hells Angels have won another round in the legal fight to regain their clubhouse in Nanaimo BC.

Begin Quote: Justice Mary Saunders, writing for a three-judge appeal court panel, said the government appeared to want to remove Widdifield to gain strategic advantage in the long running civil case between the director and several Nanaimo Hells Angels, as well as Angels Acres - the company that owns the disputed clubhouse.

"The prize in this application appears to be the availability of a Charter argument in the forfeiture proceedings," Saunders said in her reasons released Monday, explaining that Widdifield could make a constitutional argument on admissibility of evidence that wouldn't be available to the company. End Quote

The Civil Forfeiture Director has filed similar cases against the East End & Kelowna Clubhouse stating that they were used for criminal activities.

The Hells Angels are fighting back with a suit that challenges the constitutionality of B.C.'s Civil Forfeiture Act.

In the US, the funeral of Maya Angelou, the renowned poet and spiritualist is being guarded by the group 2 Million Bikers.  According the article on Jezebel, even though 2 Million Bikers does not ascribe to Angelou's beliefs, they are going to form a wall to protect her service from Westboro Bapist Church demonstrators because they believe in Freedom of Speech for everyone.

If you are blessed enough to be riding today, please ride like everyone around you is blind and cannot see you and please, consider dressing for the slide, not the ride!