I'd rather swear like a truck driver or a sailor...

5 Product Reviews, Rider Safety, Riding Gear 10:44 AM
A+ A-
Print Email
My recent crash has put me in the mood to write about safety gear and riding safely.

Because I hope and pray that this missive will save the life and or the the hide of someone I care about and who knows, that could be you.

I have lost many people I love in the motorcycle community over the almost 40 years I have been a part of it. The crew I rode with back in the 70's and 80's wore jeans and sometimes chaps, beanies or no helmet when and where the law allowed and often just a leather vest, with no shirt or jacket.

I was one of those riders/passengers. I often rode on sunny warm days with just good motorcycle boots, jeans and a vest and the only helmet I owned was a beanie.

I thought I was hot stuff.  I looked good, and I loved the way the sun felt on my skin, I hated it when a bug or rock hit me, but when I was in my 20's & 30's it was a small price to pay for looking good.

EGO - VANITY, call it what you will - STUPIDITY!

Then I got a wake up call and realized looking good was a stupid reason to not wear proper gear.

In 1986, riding on the back of the '84 FXR with my then old man, Ron LePoidvin,  I witnessed something so horrific that I was puking my guts out.

Not unlike the girl featured in this photo, (I found doing a Google Images search on HmongPlus.com), the girl on the back of this dude's sport bike was wearing a bikini, 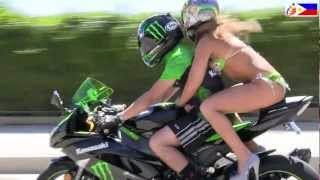 AND she was much better endowed than the girl featured here. She was at least a 38 double D and instead of wearing high heels, she was wearing flip flops, but she had on that full faced helmet.
I was rather envious of the buxom young lady, she looked great.

Well, buddy goes roaring by us as we are entering a construction zone on the outskirts of Vernon BC.

In less than 2 minutes, we came upon the most horrific scene I have ever witnessed.

The rider centre punched the back end of a pick up, but unlike the rider in the photo above, he was wearing all the gear.  He ended up in the box of the pick up, she got launched over the pick up and ended up skidding down the shoulder of the pavement for some 200 feet or better. I don't remember where the bike ended up, because I was so horrified.

While buddy ended up with some broken bones and a long recovery, he survived the crash.

His pretty, pretty passenger was dead. Her beautiful face intact thanks to the full faced helmet she wore but her statuesque figure was now nothing more than ground hamburger, you could see her ribs  where once those glorious Double D 38's had been.  Her thighs and legs and her feet and arms were no better.  It is a sight that I see every time I see another rider not wearing good gear.

I am sure her parents were grateful that they could still view her pretty face at her funeral.

Having been young once, although it was a long time ago, I still remember the feeling, men wolf whistling at me, feeding my ego, telling me how hot I looked in that leather vest with no jacket.

But that day cured me of wanting to look sexy on a motorcycle.

I learned really quickly that there was plenty of time to look hot once I got to a rally or event.
When I was off the bike, I could stash my leather jacket and don just the vest and still have my ego fed. In my mid 50's today, I don't give a hoot about sexy or having my ego fed, although it still feels nice once in a while.

After my crash on May 24th, 2014, I could have looked like Sean Stanley from the UK who shared this photo of himself on Facebook: 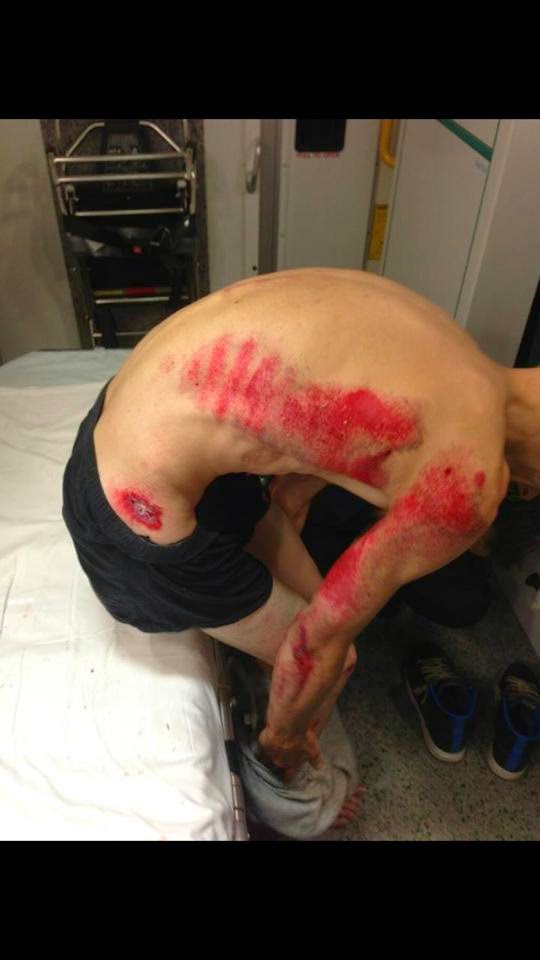 His crash happened last year in the UK at 25 MPH.
His comment was:  To all the people on motorbikes wearing t-shirts and shorts thinking they are cool, this is the result of coming off at 25mph

Imagine the pain that the road rash he sported caused him.
Imagine the scars and the gravel that he's probably still having surface from his wounds to this day!

My crash happened at about 30-35KPH on gravel, I was never more grateful for good gear.

Instead of looking like Sean, I just have some torn cartilage in my chest around my sternum, deep tissue bruising, sore muscles and a black bruise on my thigh.

No road rash and no gravel to pick out of my hide.  No trip to the hospital.

Held Gloves from Angel Wing Trading Inc. and sold by WestCoast ROAR in Mill Bay, BC that cost around $150.00:
Viking Cycle Leather Jacket from Motorcycle House that cost about $100:
Vest from Leather & Steel in Fruitvale BC - Cost about $90 (I have worn this vest for 12 years and am going to miss it...