Dealing with lawyers and lawsuits - fun and games - NOT! 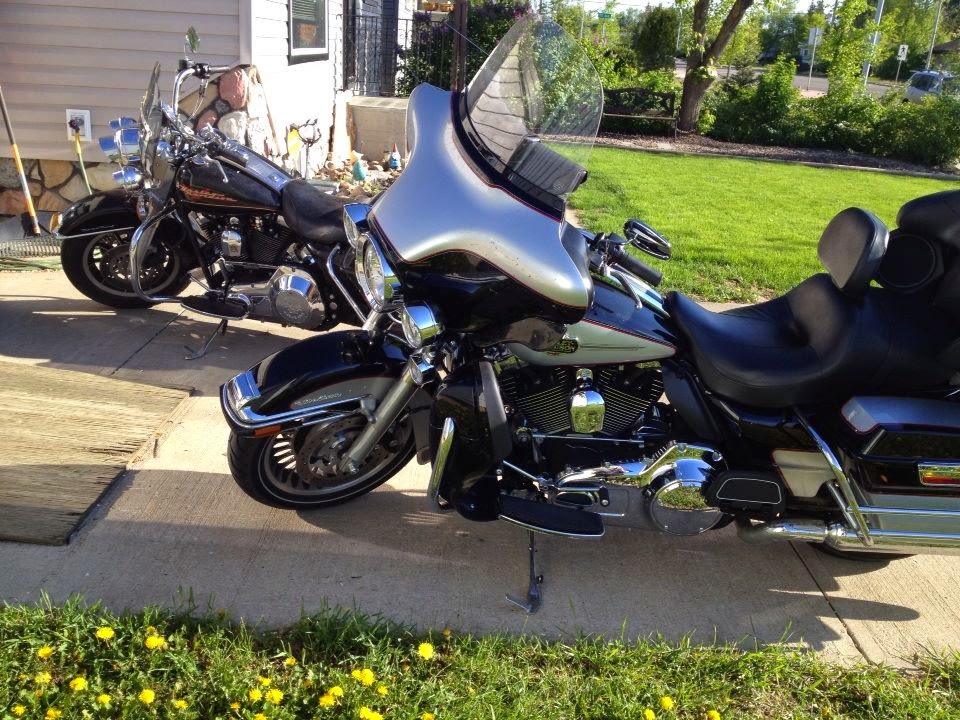 I recently posted a photo of Doc, my 2010 Ultra Classic with 9,800 miles on it, on Facebook, with the information that I am selling him in order to put a big chunk of money on the upcoming lawyers bills that I know will be arriving sooner than later.

A few people who although we are connected on Facebook, have not truly been following the story aka SAGA and took a few things out of context.

My goal here is to clear the air and update people on exactly where things stand.

For those who have not been following this misadventure, I am being sued by Sturgis North/Canada, Ray Sasseville and Joan Hansen for Libel, slander and defamation.

My reporting on Ray Sasseville and his history included links, screen shots and documents - you can read up on the history of the lawsuit here:
http://www.beltdrivebetty.com/community/bdb-defense-fund

No matter that what I reported was already in public domain and all I had done was put everything together in one place, Ray and his group decided to sue myself along with 6 others.

The shotgun lawsuit, initiated just before Christmas, included the Mayor of Sicamous, the City of Sicamous, the Sicamous Chamber of Commerce, Steve Hammer, Bernie Aubin, Vince Lewis and myself.

My attorney calls it a nuisance suit.

Nothing about this lawsuit has been straight forward.
Shortly after the suit was launched by lawyer Gerhard Pyper, Ray petitioned to self represent on behalf of himself and the company.  Joan however was still represented by Pyper.

In March we got an offer to settle from Gerhard Pyper.

The first six defendants took the offer they were given. Their offer was that if they didn't ask for costs, the plaintiffs would drop the suit.

The offer I was given was unacceptable.
They basically wanted a $250,000 gag order on me and for me to remove any reference to them off my site, out of my newspaper and to monitor social media and ensure that no one in my circle said anything about them. If I didn't they'd claim the bond money.

As a reporter, I have done my job well. I reported facts, provided evidence and asked people to educate themselves.   Nothing I wrote was untrue, nor written with malice, therefore it is not slanderous, libellous or defamation. I am covered under fair comment and freedom of the press.

Still, I must get before a judge for those freedoms to be exercised.
AND - that costs money and lots of it.

The latest developments in this case are that Gerhard Pyper, the lawyer for Joan Hansen was suspended and his law firm was closed down by the BC Law Society.  Ray is listed as self representing for himself and Sturgis North. Joan however is not represented by anyone at the moment.

Before I had a chance to send my counter offer to Ray, I got a second offer to settle from a new lawyer out of Kelowna named Greg Alfonsso.  That offer was for $1,000 cash and 30 four day passes that I could sell to offset my lawyers bills if I would market their event for them.  Again, in all good conscience I did not feel I could take this offer and so my lawyer had to rewrite my counter offer and sent it off to the new lawyer along with Ray and Joan.

To date there has been no response from any of the parties to my counter offer.

On top of that, the consent to dismiss orders for the others have hit a road block.
The only dismissal that has taken pace is that involving the Mayor and the City of Sicamous.
The other four parties paperwork was apparently never filed by Gerhard Pyper's office.
It took the BC Law Society this much time to determine this.  So now the other 4 parties will have to incur more costs to see if the original consents can be found, and if so can they be filed.

If not, then they too will face the challenge of getting the other parties to communicate and again it will cost them more money.

I myself, have recently sworn out an affidavit for my lawyer to use to have my case moved from Surrey to Salmon Arm/Vernon.  My lawyer will need to go to Surrey and petition the court to transfer the case. That means a minimum of a full day out of his office on top of the preparations for that hearing and the paperwork that will come out of that hearing.

He told me to prepare for $7-$10K for that portion of the bill.
The next step will cost far less as it will involve a hearing before a judge in Salmon Arm/Vernon where in we will petition the court to ask Ray and company, to post a bond for costs.

Then, if they do that we proceed to examinations for discovery, then to trial. If they don't post a bond, then the judge will examinee the case and potentially throw it out. At least that is my understanding on how this is supposed to work.  Each step of the way will cost a different amount of money and time.  I have been told to prepare for an over all bill of $50K from this date forward, so that I am ready for the long haul if this does go that way.

So that's where the legal end of things stand...now to deal with the money portion.

Ours is a community newspaper that does a lot of charity work and as such, it does not generate huge money, basically it covers its costs and modest wages for myself and my staff. Without fundraising, the business would be at jeopardy.  So I had started tee shirt campaigns, donation drives, sold a company bike - a Johnny Pag, some art that was donated to me via an online auction and Blair Weber organized a Poker Run to help me.

At the end of May, on the Defence Fund Poker Run, I was involved in a mishap where my bike ended up getting totalled.

I lost control in a washout on a gravel road and another rider hit me from behind before I had gone down. Had that other rider not hit me, I would have only had to replace the front fender and lived with a battle scarred fairing.  As it was though, the bike was written off and the RCMP consequently charged the other rider with following too close.  The bike I bought to replace my Street glide with was purchased at Edmonton Harley-Davidson.  With what insurance gave me for my bike, some personal savings and $1,800 of the money from the poker run I was able to get another work vehicle.
(As a moto journalist, my motorcycle is a workhorse not a pleasure machine.)

I had no choice, if I wanted to keep the newspaper running, my source of income, not to mention my employees paid,  I had to use some of that money. I have managed to keep paying the lawyer because I was working and so eventually the $1,800 raised did go on the lawyers bill, but funny thing, those bills just keep coming.

Had I been able to put all of that defence run money on the bill at the time, I'd be about $1,800 closer to having him paid up towards this newest bill. As it stands, I owe him about $500 right now, since I was able to, yesterday, make a payment to him from the sale of SOA art in an online auction we held last month.

Because of the latest twists and turns of this lawsuit, I have an anticipated $7-$10K bill coming to get the venue changed from Surrey to Salmon Arm.

I also have a business loan and my motorcycle is but one piece of the collateral for that loan.
My banker has agreed that if I sell the bike, they will take 50% towards my loan and allow me the other 50% to pay my lawyer.

If this court case gets dropped, by some miracle, then I will just continue paying the lawyer monthly until he is paid off and use the remaining money towards another bike.

Nothing about this lawsuit has been straight forward nor does it remotely resemble normal practices according to my attorney.

I need to take some stress off of my brain so that I can focus and concentrate on doing the work my team and I do in and for the riding community.

If I can't put my focus on Belt Drive Betty Media and all of the support tools we offer the community then I and my employees will not have wages to live on.
This doesn't just affect me or my small staff, it affects the entire community that uses our events calendars, our newspaper and web sites as sources of information.

I am not asking for a hand out but a hand up.
I am willing to sell everything I own to defend myself if that's what it takes to see this thing through.

I am selling items like tee shirts, like so many businesses do, but instead of that money funding my business, like it does for other businesses, the tee shirt sales are helping to fund my lawsuit.

If you know anyone looking for a great bike with extended warranty, please put them in touch with me via bdbetty @ gmail.com  - fix the spaces.

If you are interested in purchasing a tee shirt to support the cause please visit: http://teespring.com/beltdrivebetty

I hope this clears things up for those who seem to be confused about this lawsuit, and what I am preparing for and why I am doing what I am doing.  I want to do the work I do, pay my bills, eat decently and enjoy life just like every other working stiff out there.  I want to be able to sleep at night without worrying about how I am going to come up with the money for the lawyer, a bill I know is coming sooner than later.

That's all!  By selling my bike, I can take the pressure off of the looming lawyer's bill and focus on the business and community.

By the way we have some great prizes up for grabs in our Capture the Gear Fail Photo Contest.

Visit Our Contest Page to find out more!

If you are blessed to be riding today, please ride like everyone around you is blind and cannot see you.