0 Fort Saskatchewan, Lawsuit, Motorcycle Noise 10:12 AM
A+ A-
Print Email
I spoke with Mr. Richard Jones this morning regarding the lawsuit in Quebec that was referenced in his interview with Lindsay Morey of Sun Media last week. (http://www.fortsaskatchewanrecord.com/2014/10/09/city-sued-over-noise)

I asked him specifically about the lawsuit in Quebec he referenced in the interview above, with the quote below:

Begin Quote:
"Resident gave warning of lawsuit in February
In late February, the 99th Avenue resident stood in front of city council and said the noise situation in the Fort has become “grave” over the past 15 years.
Jones highlighted a precedent set in Quebec where the residents sued the government for $8 million over the same problem. END Quote

Since I could find no case in where a Quebec town had sued over motorcycle noise, which is what I thought Mr. Jones meant, I decided to contact him.

In fact, he was speaking of the ability of citizens to sue their city/region over noise issues when they fail to enforce the law.

The case he refers to transpired in Laurentides QC. The ruling in the lawsuit took place in 2004.
Here is a link to the decision in the lawsuit 2004 CanLII 45407 (QC/CS)   It is in French

Begin Quote: "In a decision that could cause ripples across Canada's winter tourism industry, a judge in Quebec has ruled that people living near a snowmobile trail in the Laurentians should be compensated because of noise levels.

Calling themselves the Coalition for the Protection of the Environment of the Petit Train du Nord Linear Park, about 600 residents took the province, Laurentians municipal government and snowmobile clubs to court when the trail was approved seven years ago.

They filed a class-action lawsuit, arguing the snowmobiles were a source of noise pollution that affected their health." End Quote

From the report by Fasken Martineau DuMoulinAttorneys:

Begin Quote: On November 30, 2004, the day before the season opened, the Superior Court of Québec ordered the Laurentides regional county municipality to bar snowmobiles from using the P’tit Train du Nord linear park between Saint-Faustin-Lac-Carré and Labelle.

The judgement from the same report - Begin Quote: Damages

The Court awarded a $1,200 indemnity to each member living within 100 m or less of the trail between the 1997-1998 and 2003-2004 winter seasons. This first amount was to be paid by the regional county municipality. The Attorney General of Québec was then ordered to pay the same amount for the 2002-2003 and 2003-2004 seasons. For their part, the snowmobile clubs were not ordered to pay any damages. End Quote 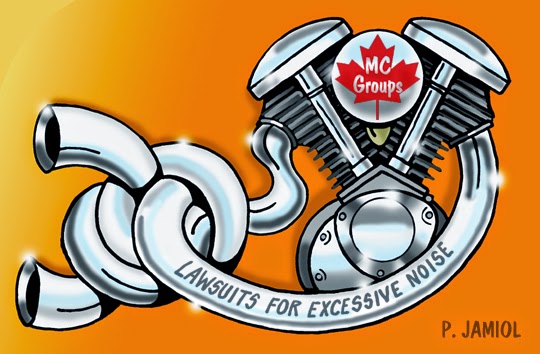 While Mr. Jones may feel the case in Quebec verifies that individuals have the right to sue government, I do believe that every case needs to move forward based on merit.

I am no lawyer, but when I look at what transpired in Quebec, and how the snowmobile trail came to be, I see no way to compare it to the case in Fort Saskatchewan, not even in regards to citizens having the right to sue a municipality. Other than noise being a bone of contention, I see no parallels here.

I am waiting for a response from the organization "One Square Inch" to see if it is true that they have offered to fund Mr. Jones lawsuit.

At the end of the day, our cities are getting noisier. The bigger our populations get, the worse it gets.

Our community, like all road user communities, has members within it's ranks that don't play well with others and those people are ruining it for everyone else. It happens within the tuner car community, the snowmobile community etc.

MOST Loud Pipes, when used respectfully, don't generally piss people off - I think we can all agree that this issue is not just about the pipes themselves but the person in charge of them and their use - the person controlling that right hand....

I truly believe that this whole issue would go away if we could just learn to share our communities better.

Hope you had a great Thanksgiving Day.